How do the pricing structures of various bike sharing schemes compare? [closed]

Ask Question
Asked 8 years ago
Active 8 years ago
Viewed 217 times
-2
It's difficult to tell what is being asked here. This question is ambiguous, vague, incomplete, overly broad, or rhetorical and cannot be reasonably answered in its current form. For help clarifying this question so that it can be reopened, visit the help center.
Closed 8 years ago.

Many major cities now have bike sharing schemes, and each seems to have its own system of rates, designed to encourage shorter rides and quick returns; but it's hard to compare them. Is there a reference somewhere that draws direct comparisons among the pricing schemes for the major bike sharing systems?

A quick Google brought up This article. It shows a list of prices for bike sharing rates in 10 cities around the world. It shows prices for various lengths of time that you can rent/borrow the bike for. In most places, the first 30 minutes (sometimes 45 minutes) are free, if you pay for a small yearly membership.

All of the large cycle hire schemes offer several plans and for each, the cost of a ride depends on the length of the ride, as well as the number of rides during the period covered by the plan.

Assuming 2 rides on 24 hour pass, some example plans stack up like this, for rides of up to 2 hours: 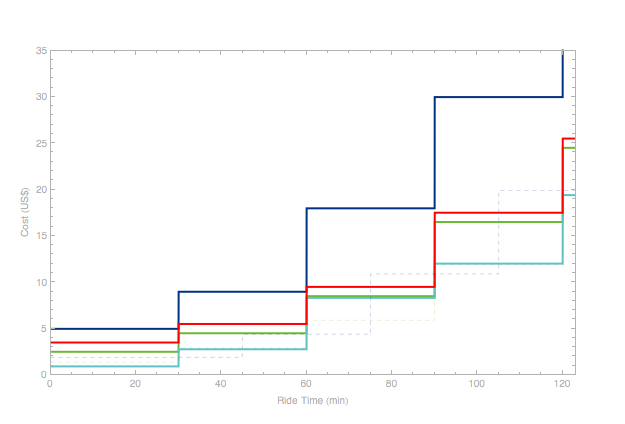 The first thing that's clear is that — not surprisingly — cost goes up with duration. The second is that plans have similar structures, in which costs go up in steps, typically at 30 minute intervals. More surprisingly, perhaps, is the significant difference in cost, with New York being most and London being least expensive.

This figure is a bit misleading though, since all of these systems are designed for short rides of generally less than 30 minutes, and certainly less than an hour. Focusing on these gives a better picture of actual scenarios: 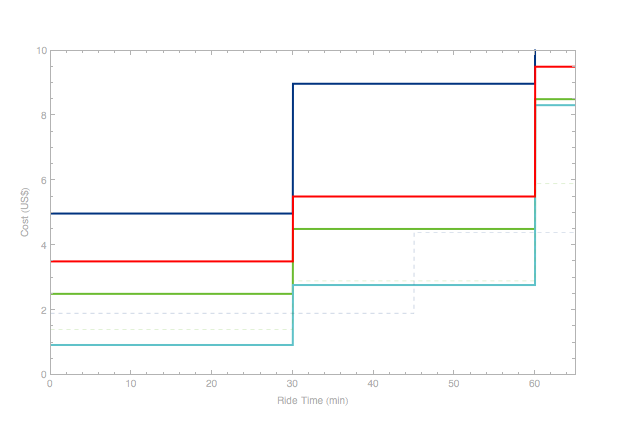 Both if these figures though conceal a misconception about the pricing schemes that all of these systems use: that they discourage long rides. This is really only partly true, and only true, as it were, "in steps", as one can clearly see by looking at the cost per minute, for "rides" of up to 24 hours: 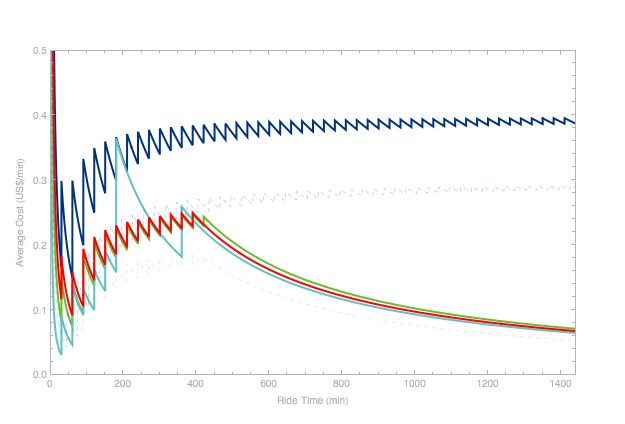 Here, some odd features are exposed, notably the leveling off of cost per minute, the jump in average cost in London (from being cheapest, to matching New York's most expensive), and the long decline in some cities.

Again, it's most useful to focus on short rides: 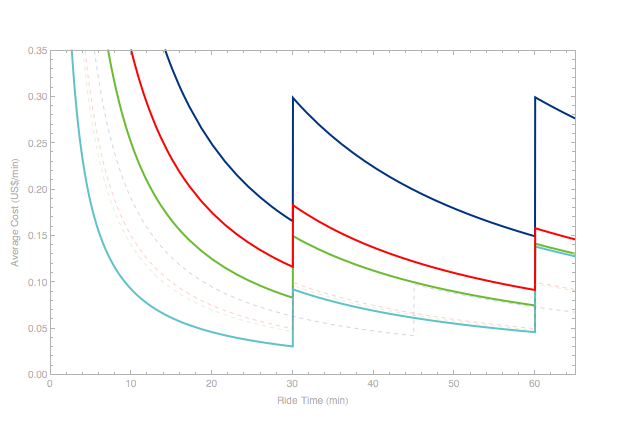 Over this range the outstanding feature is the rise and fall of per minute cost, the initially very high cost per minute, and, again, the large difference in cost between systems.

Not the answer you're looking for? Browse other questions tagged price sharing-scheme or ask your own question.