How important is it for a cyclist to be able to perform tricks? [closed]

Ask Question
Asked 10 years, 6 months ago
Modified 7 years, 4 months ago
Viewed 433 times
-5
As it currently stands, this question is not a good fit for our Q&A format. We expect answers to be supported by facts, references, or expertise, but this question will likely solicit debate, arguments, polling, or extended discussion. If you feel that this question can be improved and possibly reopened, visit the help center for guidance.
Closed 10 years ago.

Who does not like doing tricks on their bikes? Every cyclist at some point in the cycling journey thinks about learning tricks they can perform on their bikes. Some of riders it might be fun, for others for serious and technical riding.

From my experience, although most of these start as fun, it ends up being very profitable in the rides I go on. These rides being commuting, where free hands, trackstands, bunny hops prove to be real handy, or in trails where bunny hops, drifting, stoppie can be life savings.

But, honestly I don't believe that learning tricks is a unavoidable part of being a cyclist. I have seen cyclists capable of pumping non-stop uphill for hours. They barely use any tricks and go beyond core cycling with sprints, body positions and pedalling techniques. For a hobby cyclist like me, knowing some tricks is not even comparable to their skills.

I practice a lot, I commute, I go on endurance drills and all of these rides will pay off eventually. But I am wondering if I should spend time learning and practising tricks as well.

Basically, the question is How important is it to learn tricks to be a good rider?

In my opinion, what defines a master is how much he dominates his craft. If we consider riding bike as a craft or tool. A true master is one who, at any level of skill, is always below his limit.

Just as an example, let's consider a professor, a math professor. If he only knows what he teaches his students, and cannot go off the beaten path, he's everyday working at the limit, and has not any "reserve" in case a student appears with an atypical question or problem. In the other hand, a professor who has a deep, philosophical knowledge of math, and knows the why's and how's of it, he's always working in his "comfort zone", and no student would catch him by surprise.

A musician who studied all his scales up and down, thousands of times throughout his life, can perform solos at lightning speed, and even if he gets nervous or makes a mistake, he can gracefully recover and the audience will barely notice. Now a novice, if he gets lost during an intricate musical part, will not know what to do and fail.

Now riding bikes requires physical knowledge more than theoretical one, and these can only be learned by continuous, repetitive, deliberate practice.

If one rides in traffic, or down a trail, and is too close to his limit, anything unexpected can be too much. He's always one step from being caught by surprise. But if he has a broad repertoire of "movements" he can apply on the bike, a wide "menu" of courses of action is always ready to be put in practice.

I spent my youth doing XC mountain biking, and now I'm mostly a commuter, night-rider, and take some roads during weekends. I cannot count the times when the former XC skills helped me avoid cars and motorcycles, jumping over potholes, even going UP some short stairs, and properly reducing speed before hitting something accidentally (sometimes a fellow rider). And, although my riding style cannot be described as "subtle", have not had any serious fall in years (although they were relatively common in trails, years ago).

To answer your question directly: Learning to dominate a bicycle is as important as you feel it is.

In my opinion this thread is a lot of elitist carp. There are plenty of perfectly competent bike commuters and tourists, eg, who can't do a track stand or a bunny hop, and many road bikes do not have the steering geometry for "no hands" riding.

It's nice if you can do all this stuff, but to imply that a cyclist is incompetent (and should by implication stay off the road) if they can't is pompous and arrogant.

I regard it as a safety aspect. Simple things like riding without hands on the handlebars, jumping small objects, track-stands all help with balance and help you avoid problems in tight spaces amongst traffic.

In my line of riding, it was imperative that you knew more tricks than your competition, or at least knew how to do them better than the other guy. So yes, in my case you MUST learn tricks to be a "GOOD" rider. After reading about pumping uphill for hours, I am going to take a stab in the dark and assume that you are not a competitor in the X-Games though.

If you ride trails, learn to bunny-hop to get over logs. Even road riders should be able to at least jump a curb's height for emergencies (I got squeezed between a bus and a snowbank in Japan and my ability to hop a curb saved me). Endos/stoppies are fun to do and teaches you front-end balance, but not required (can't remember the last time an endo saved me on the trails). Skids, rear-wheel hops, track-stands, everything else you can think of will all help teach you fundamentals of bike handling, but other than a bunny hop, I can't think of anytime any of my tricks helped other than to show off for some girls. 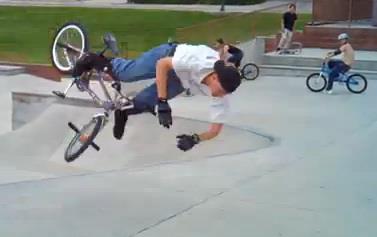 26
How close do I have to be for effective drafting (while commuting)?
5
How to setup my 26er MTB for indoor MTB park