Is it possible to estimate road grade while riding?

It would be nice to be able to estimate the grade of a road while riding, even if the estimate is not completely accurate. With a GPS, in theory it should be possible in theory to ride a short distance and divide the difference in elevation by the distance ridden to get a rough estimate. (Note that the sine and tangent are comparable for small angles.)

Is the elevation given by a cell phone or GPS-equipped bike computer accurate enough to give a meaningful grade estimate over short distances? Furthermore, is there any practical way to estimate the grade of a road that does not require a GPS?

Get an inclinometer. They're not particularly accurate, but readout is instant and the price is right. 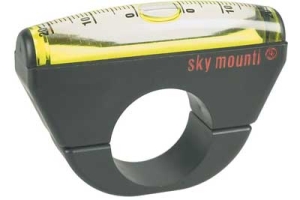 Most of the Garmin Edge series GPS cycling computers can display grade. The Edge 500 and Edge 800 (not the Edge 200) have barometric altimeters to determine altitude. You can then change or add a display data field to show the current grade.

Funny you ask as I just put added the grade as a display field this morning on a hilly ride.

Also many computer applications can take a GPS track log, and retrieve the known altitude of that point and compute grade after the fact. For example if you using OS X I know Ascent does this (note I am NOT endorsing this program, just using it as a known example). I am also sure there are many other GPS track analysis programs that do as well. I am sure there are some smartphone applications that can record an GPS track, which you could potentially import into one of these analysis programs to get the grade after the fact.

Aside - Some of the older discontinued Edge Units (e.g. Edge 305, 705) have barometric altimeters as well. This can be a more affordable option if you can find a used one on ebay or craigslist. I say this as I am about to list my old Edge 305 after upgrading to an Edge 800.

Cell phones, usually not. Some applications will attempt to massage the data using elevation information provided from third-parties, but its a crapshoot at best. A dedicated GPS with a barometric altimeter is probably your best bet. I can't really speak to their level of accuracy, but it's certainly better than other practical options.

If you just want grade, there's an app for that.

Others have already discussed GPS and GPS-enabled phones, altimetric barometers, and inclinometers. Bubble inclinometers (such as the Skymounti shown elsewhere among the answers) can be affected by acclerations so to get the best readings you should be stationary. dGPS (differential GPS) is used in surveying instruments to measure grades, but these are generally not consumer-level devices, nor are they compact enough for bicycle use. Grades can also be measured, while stopped, with a long straightedge, a protractor, and a plumb line. Some phones and other devices (such as iPods and Wii controllers) have built-in multi-axis accelerometers that will report gradient information as you ride, but reports are that their precision can be affected by bumpy roads. The iBike line of bicycle computers use a combination of barometric, speed, and accelerometer sensors; reportedly, the gradient estimates can be quite good.

That said, one of the most precise devices that can be used to determine road grade while on a bicycle is a well-calibrated power meter. Under favorable conditions, road grade can be extracted from speed and power data (if one knows or can measure a few other variables). For example, here is a comparison of the profile of the flat Moriarty, New Mexico, TT course on which the 40 km US national time trial record was set. The course is a straight out-and-back (that is, 20km out, a turn-around, and then 20km back for a total of 40km) and one of the flattest in the country, with only 30 meters of drop over 20km for an average gradient of .0015 (0.15%). The plot below shows three traces: a measurement of the gradient using a consumer-level GPS receiver in blue, and two traces (in red and green) derived from power meter measurements. The green line shows the reconstructed elevation profile on a day with unfavorable conditions, while the red line shows the reconstructed profile on a favorable day. Because this course is an out-and-back, the profiles before and after the 20km point should be mirror images, and at the end should match up at the same elevation. As can be seen, under favorable conditions the profile reconstructed from the power meter outperforms that from a GPS (though on an unfavorable day the profile is much worse). 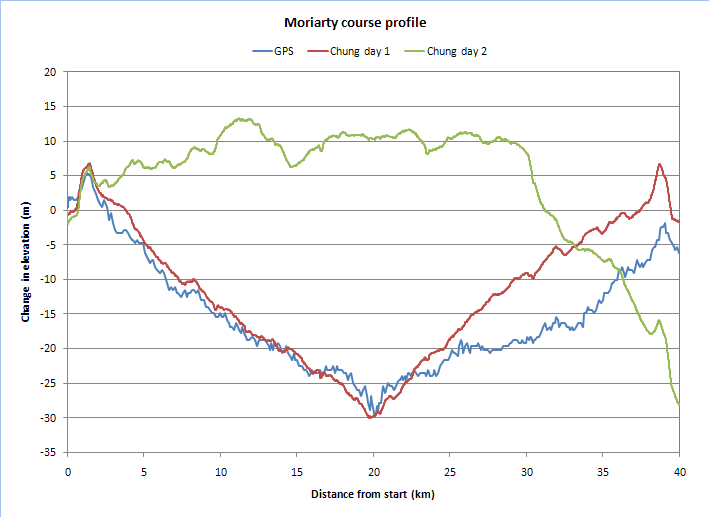 For another example, here is the reconstructed elevation profile for a multi-use path along the shore of San Francisco Bay.

This shows the profile over a 1 mile (=1.6 km) out-and-back segment of the trail. Once again, you can see that the two halves of the reconstructed profile are mirror images, and the average slope was about .00125. Just as importantly, you can easily spot consistent dips in the trail of less than 40 cm (about a foot).

The description of the analytical method used for these two plots and the additional data required is given here.

Ignoring GPS-derived elevation, the GPS can still be useful.. If you record your ride, then upload your ride to Strava you see the elevation profile based on a terrain-elevation-database: 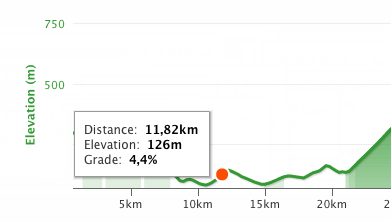 You can mouse over sections of the elevation-profile, which shows you the grade at that point. The area you mouse-over is indicated on the map as a marker: 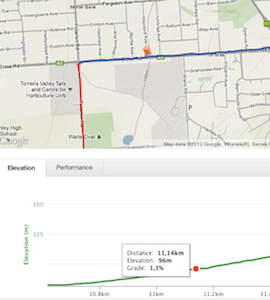 You can also drag-select a section of your ride and it gives you stats like the average-grade and elevation-gain.

While this doesn't directly tell you the grade of the hill you are cycling up the time, you can quickly learn how to estimate the grade "by feel" (by how hard it is to cycle up), or by memory (by knowing this road is a Strava segment, and what it's average grade is)

On an Android phone, load 'Leveler' by chkuentz, an excellent, free level app that puts out degrees of slope directly. Use the formula, tan(degrees)= percent grade. Example: tangent of 3 degrees = 0.052, or 5.2 percent. Either lay your phone on it's side edge, on the road surface, or on your to bar, if it's level with the road. Read off the degrees then covert. Not elegant, but it's cheap and fairly accurate.

I had the same question and it looks like the bicycle computers have a delay in measuring grade of the road and are using barometric pressure sensors or GPS. A BNO-055 9-DOF directional sensor would provide instant angle measurements or average during each wheel revolution.