Big question: Is there any way to increase the security of bolted on portions of a bicycle?

Specifics: I cycle as my primary mode of transport (in East London) on a early 90s steel road bike with drop bars. It's a good bike, though it could use a paint job. A few weeks ago my bicycle was securely locked in a place with moderate foot traffic (I'd guess someone walked by every 3-5 minutes) for about 4 hours. During that time, someone undid my (quill) stem and the brake cables (at the caliper) and made off with my handlebars, stem, brake levers and brake cabling. So with that in mind, does anyone know of means to secure that portion of my bicycle?

(Part of my concern is that I'd love to move to STI/Ergos from my current downtube thumb shifters, but I can't escape the nagging feeling that a move like that would have massively increased the replacement cost of this theft, and I'm yet to find an acceptable security strategy)

Update: Was just directed to https://pinheadlocks.com/store/en/ by jstutters on twitter which is clearly close to what I'm after, though not quite right for a quill stem. If anyone has experience with this sort of system, I'd love to hear about it and if anyone knows of something similar that works with quill stems/threaded headsets that would also be very useful·

Second Update(Nov 2014): I've taken to using a full setup from http://atomic22.com they're pricy, but exactly what I was after. Been using them for a couple months now and am thus far very pleased.

For quill stems, you can use a rubber cement to glue a ball-bearing into the socket on the stem bolt, making it so you can't get at it with an allen key.

You'd obviously want to use a glue that can be removed with a solvent, so that you'd be able to do regular service.

One additional technique that works quite well is to camouflage your bike by making it look UGLY. Add reflective tape bits everywhere. Leave scratches and scuffs or cover them with a clear or mismatched paint. Put a ratty cover on your saddle. Cover brand names wherever possible. Zip tie junk wherever. Soft beeswax mixed with food coloring and rubbed on chrome parts will protect the parts and make them look terrible. Get creative! You can go a long way to making a great bike look like a total junker, which makes it a less than ideal target-especially for opportunistic thieves. Ideally you can do this without damaging your bike, too!

The uglifying technique alone won't stop bike theft, but it takes your bike off of the radar of most thieves.

It might also be worth it to consider buying an actual junker for commuting and keeping your nice ride for nice rides (considering a cheap bike costs $100-200 while replacing your wheels/handlebar groups/brakes/etc costs much more).

I've heard good things about Atomic 22, and they have a quill stem fastener. I haven't used them myself though, so don't take this as a recommendation, and ask around!

The only other vendor I recall hearing about is Pitlock, but like Pinhead I don't think they have a quill product.

Otherwise, the ball-bearing + wax or solder method is probably easiest. 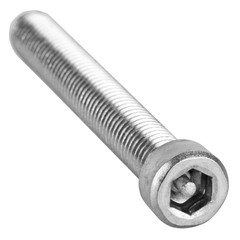 There's really nothing you can do to stop a determined criminal, only slow him down, but security bolts will add a level of confusion which will quickly deter the average opportunistic thief.

Pitlock is head and shoulders more secure than Pinhead, which can be defeated.

That said, for my "errand bike" I use the cheaper Pinhead locks in combination with ugliness plus JB Weld in nearly every allen head on the whole bike.

Probably overkill. For this bike I don't plan to upgrade anything so it's not a problem -- and the occasional required part replacement can be handled with a hammer and a punch to break away the JB weld.

There is a fairly new solution for securing components I came across recently that hasn't been mentioned here yet:

It's basically a filler for existing bolts that needs a special tool to remove them (the keyword being "existing", meaning no replacements necessary).

Not the answer you're looking for? Browse other questions tagged handlebars security lock stem theft or ask your own question.

35
Theft deterrents (in addition to locking up a bike)
19
Lock my bicycle on busy or quiet places?
3
securing disk brakes against theft in a low-visibility locked bike room
-3
keyed (locking) skewers and seat bolts: recommendations?

35
Theft deterrents (in addition to locking up a bike)
23
Evidence on "Uglify Your Bike: Effective Theft Deterrent?"
6
Are there electronic/active theft deterrents for bicycles?
14
Can a chain-lock be better against cutting than a U-lock?
4
Removing bike interfaces to reduce likelyhood of theft?
12
Usage experience with anti-theft GPS trackers
20
Protecting bike attachments such as lights against theft
3
securing disk brakes against theft in a low-visibility locked bike room
11
Warranty on lock damaged during attempted theft