How can I adapt a mountain bike for a one or two week tour?

This is the situation. I have GT Agressor 1.0 mountain bike. I want to travel for about a week on my bike, which means that I will have to ride a lot on paved roads (around 70% of the road). So I would like to make the proper adjustments on my GT to improve my speed and make it lighter. Once I come back I'd like to recover my mountain bike. One additional point that is worth mentioning: to buy another bicycle for that specific purpose is not an option.

Said that, the question would be: how can I (temporarily) convert my mountain bike into a touring bike?

The first thing you'll want to look at are the tires. Most mountain bikes come with knobby tires for riding on dirt and gravel. A set of slicks or semi-slick tires will decrease rolling resistance. Tires with tread on the sides are also good for this.

Racks: A sturdy rear rack and a front rack are the best way to go for long-term use. Be aware that a suspension fork can make fitting a front rack difficult, but there are racks made to accomodate this. (Old Man Mountain racks are amazingly sturdy and work with suspension forks, but they're not cheap or light.) Rear racks are only a problem if you have a full-suspension bike.

You may be tempted to put only a rear rack on the bike. This will still allow you to carry a good amount of cargo, but the shorter wheelbase of a mountain bike (compared to a proper touring or cyclocross bike) will encourage wheelies while climbing hills with a load, so be careful.

If your bike doesn't have the fittings for racks, hose clamps are a handy way to get around that.

It may be easier to buy or borrow a trailer for touring. You can get a cargo trailer, or find a kid/pet trailer and convert it. These can often be found at yard sales or on craigslist inexpensively. A trailer also means you can skip buying panniers.

You may find the flat bars of a mountain bike onerous while riding for hours and hours. A pair of barends will help here. I recommend the large, curved kind that allow you to sit more upright.

For a single trip, this would be overkill, but if you decide to do more touring on this bike, look into getting a decent touring saddle that you can sit on for hours on end, or even a Brooks.

Getting fenders for a single trip is, similarly, probably not needed, and many mountain bikes would be tricky to fit them on. But there are partial fenders you can mount on your downtube that might help. (Or you could make one out of cardboard and zip ties, it'd probably last you the weekend and then some.)

I toured several times using an old mountain bike; here it is, with Tubus racks and four panniers and a camping roll: 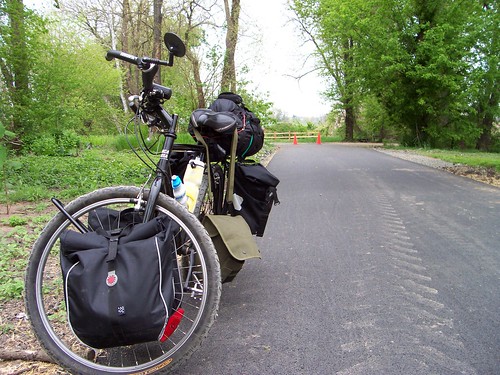 Double-check your brakes before heading out; enough stopping power to bring you and the bike to a halt might not be enough when you add on the weight of camping gear and clothing and a beat-up guitar for the campfire.

Mountain bike tourers aren't quite as comfortable as dedicated touring bikes, but the fun of being able to hop onto the dirt outweighs that. You may be a little slower than a touring bike, but even with your slick tires, you'll smoke those guys on gravel trails. Have fun!

Not the answer you're looking for? Browse other questions tagged mountain-bike touring touring-bikes or ask your own question.

2
How to distribute weight properly in this situation?
176
Terminology index - a list of bike part names and cycling concepts