I have just been watching the women's team sprint finals, and sawsaw China lose the final race due to a rule infringement. Earlier the Great British team were disqualified for the same reason. There is a set region that one rider has to peel off and let the other pass through.

Despite the commentators' best efforts I still don't understand where this region is marked on the course.

Also I don't understand why there is such a rule at all. The lead rider allows the second rider to draft for the start of the race, so they want to stay in the race as long as they can, but they wouldn't want to stay in until the end. Is there a reason for a fixed change-over zone (e.g.safety), or is it just a rule that's always been part of the sport?

The rules for Track Races are here. In the Team Sprint:

The leading rider shall lead the first lap and move towards the outside of the track and then drop back to leave the track without hindering the other team.

In Great Britain's semi-final this is what happened at the end of the first lap: 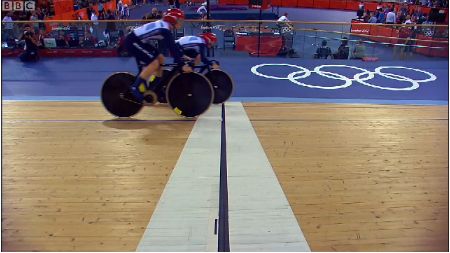 The same thing happened to the Chinese team in the final.

Hope this helps. The part of the international cycling union regulations about women's team sprint states that

it is a race of 2 laps with 2 riders. Each rider must complete one lap each. The leading rider shall lead the first lap and move towards the outside of the track and the second rider shall complete the second lap on their own.

A team shall be relegated to the last place if any of the following infringements occur.

In the Olympic race the wheels crossed within this 30 metre window so it was deemed that one of the riders (both GB and China) did not complete a whole lap. It is the rule that each rider complete one lap almost exactly down to 30 metres. Surprised it doesn't happen more often at the speed they are going.

Not the answer you're looking for? Browse other questions tagged racing track-racing or ask your own question.

2
What are criteria for a team to get UCI World Tour license for the next season?
8
I don't want to be the next Eddy Merckx; Is competitive cycling right for me?
3
Are there rules for how many riders can be in a World Tour team?