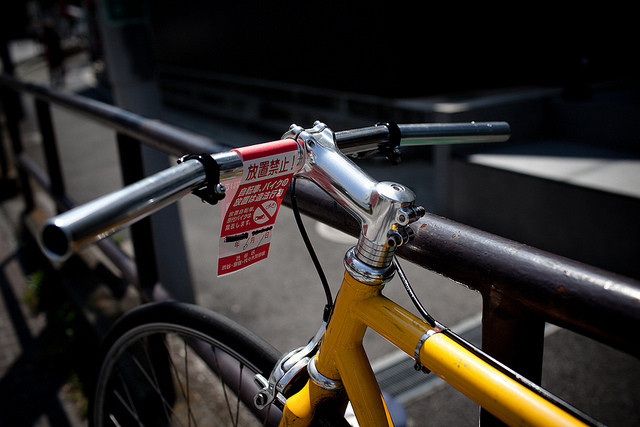 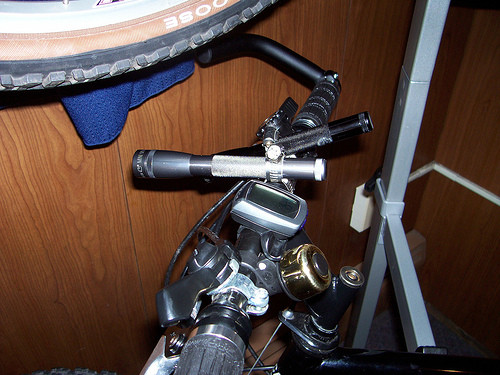 Usually seen on road bikes. Designed to give the rider multiple hand positions, as well as the ability to "tuck" forward, decreasing wind drag. These can be fitted with aerobars for additional aerodynamic advantage.

Drop bars are generally narrower than flat bars, and don't offer quite as much detailed control over the bike on uneven surfaces. Drops are often the bars of choice for longer bike rides. 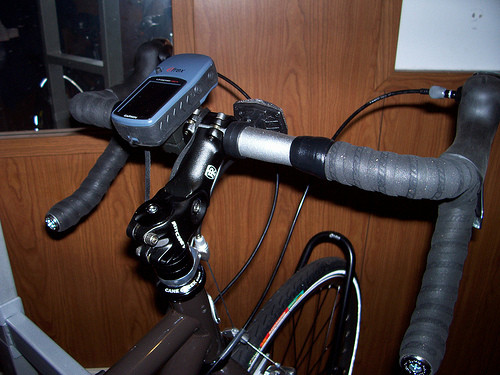 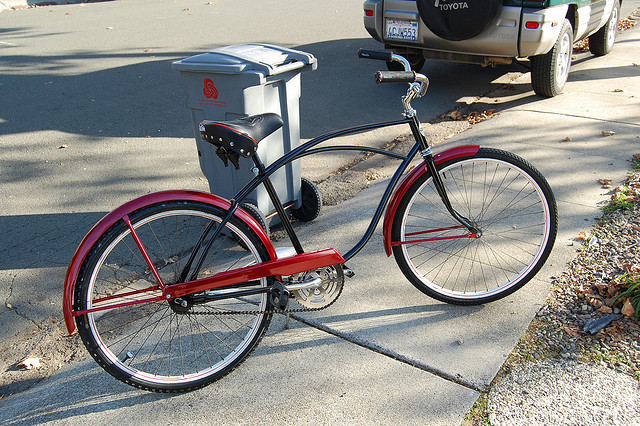 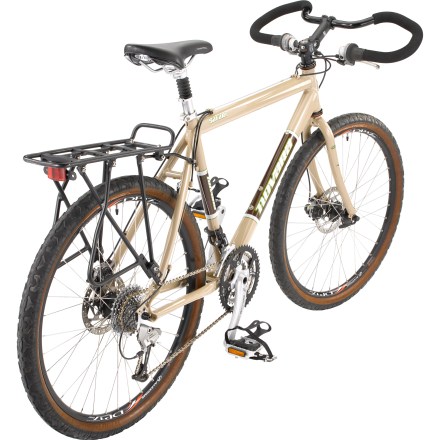 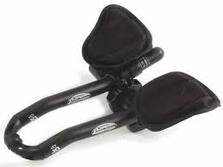 (or aerobars) originating from triathlon, but now seen in almost any time trial situation where the racer is alone and not able to ride in a group.

The pros of the design are to promote a static, streamlined position, where the rider cannot easily move but will remain in a aerodynamically advantageous position, thus resulting in a faster ride.

The cons are that this design is often uncomfortable for extended periods. When used on a bike that is then ridden in a group, it can be dangerous, as coming off the bars to use the brakes takes time, and some designs present what is effectively a couple of spikes to the front, which could make a collision with a softer target a worse outcome.

Tri-bars can be 'standalone' bars or installed as an add-on to normal bars. Gear shifters can also be added to allow riders to remain in position while changing gear. Triathletes will often use the space between the hands to place a bottle with a straw to allow for hydration with minimum movement. 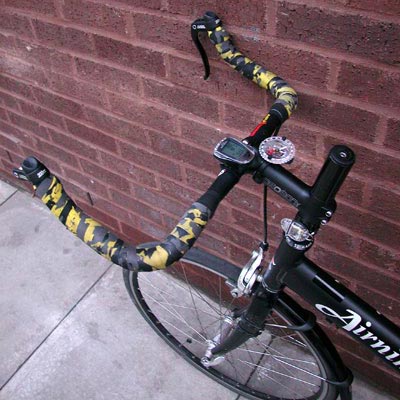 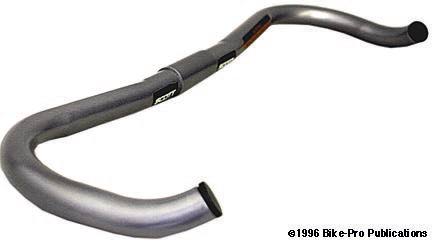 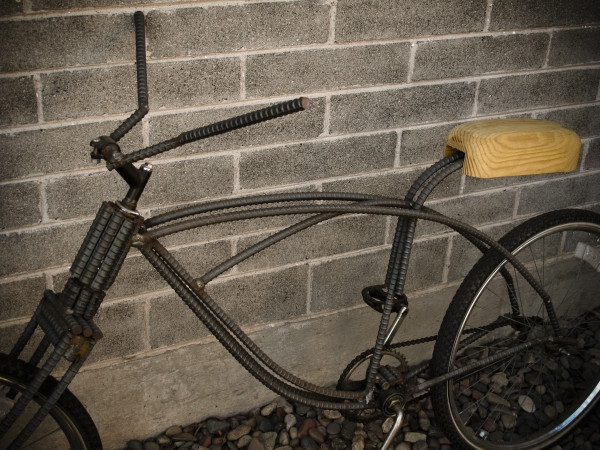 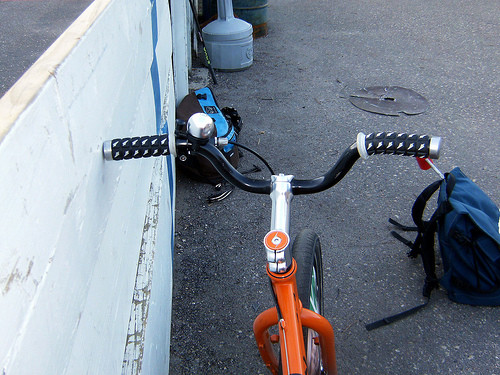 Another important distinction in a drop bar is the shape of the drop. There are ergo bars that look like this: 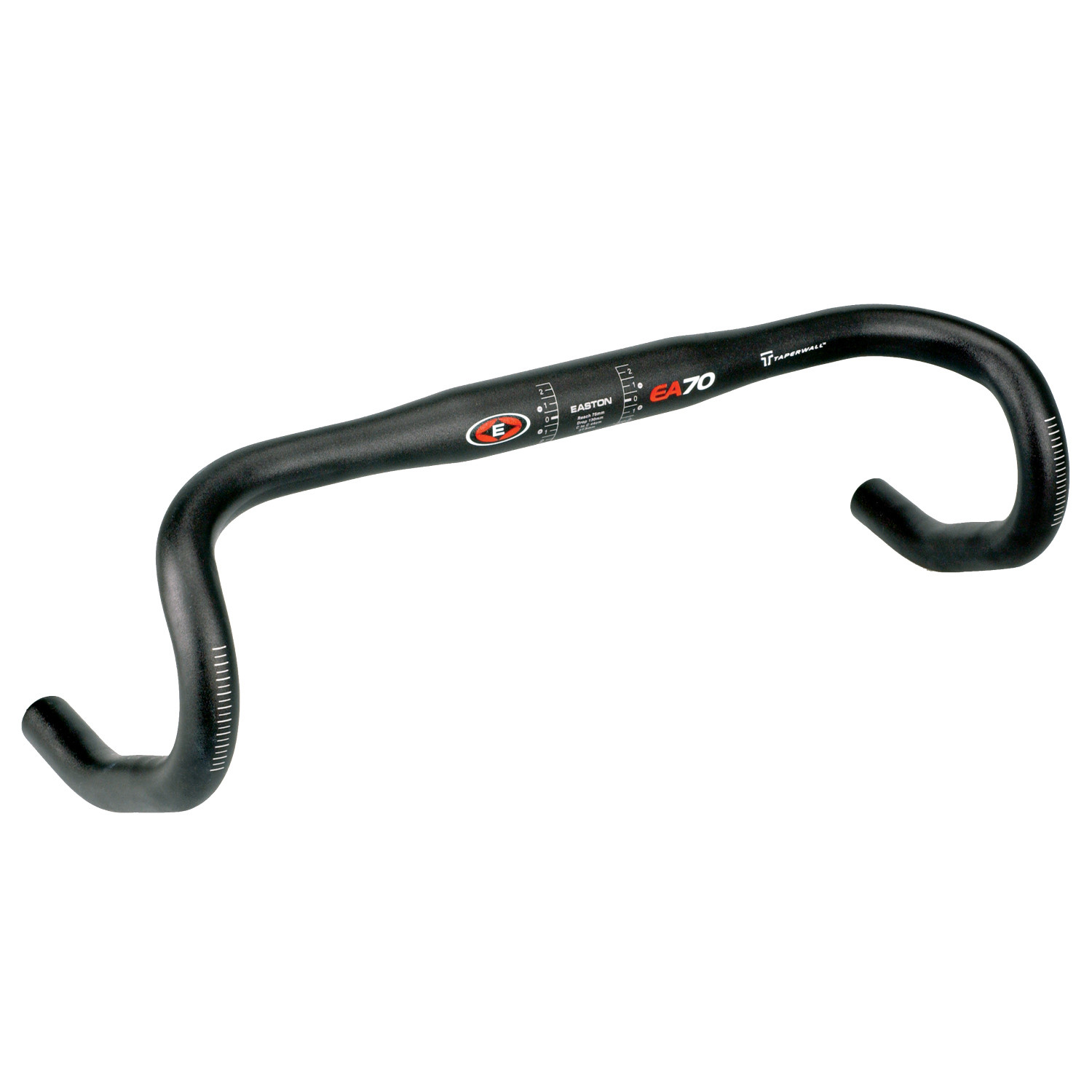 There are conventional curved bars that look like this: 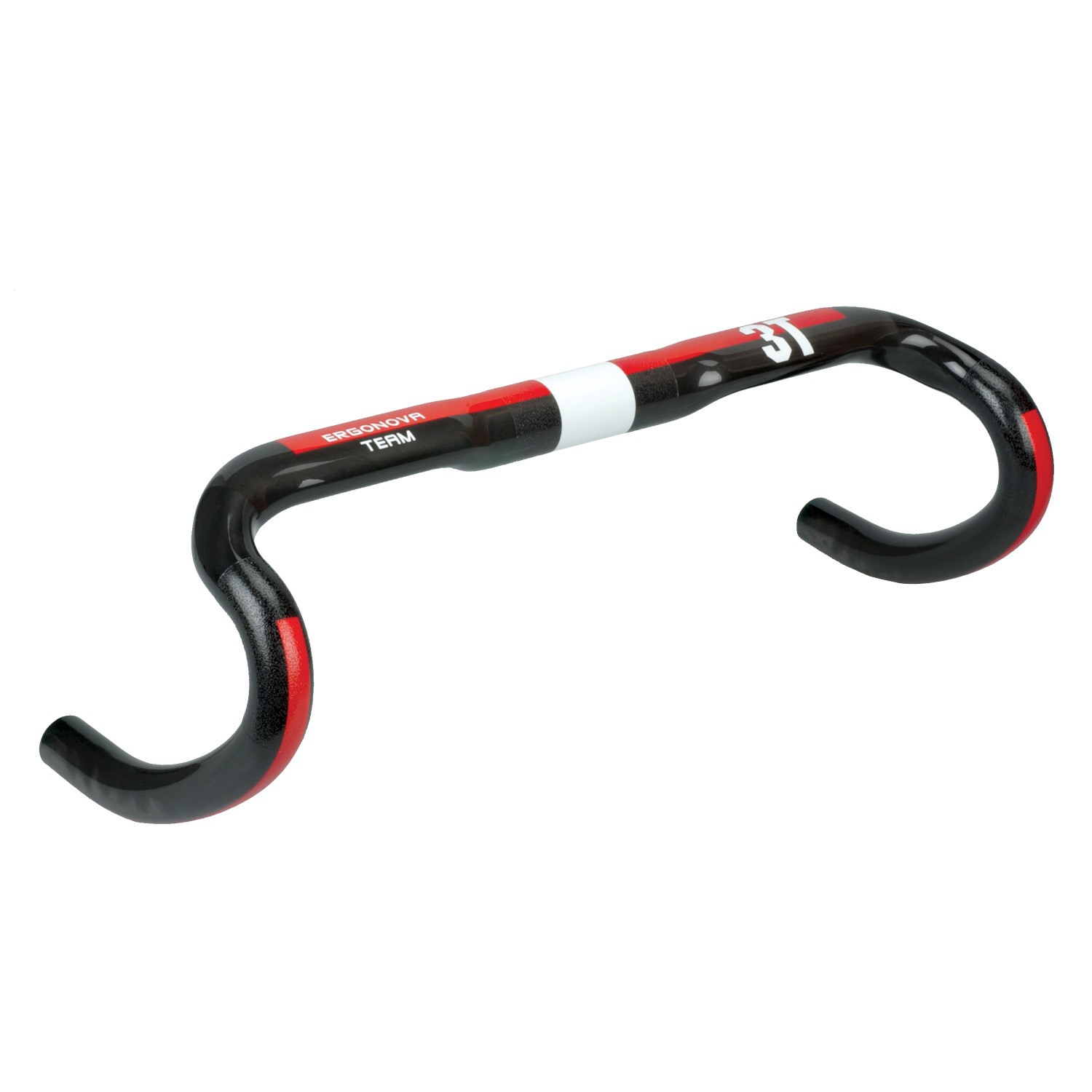 Note that the links are just representative of the style, not the actual cost. There should be negligible price difference between the bars.

In my case, the ergo bar pushes the palm of my hand away from the levers. This makes it much more difficult to reach the levers (mostly for shifting, although it is at the limit of comfort for braking as well). You could fix this problem one of two ways: buying a set of levers which have an adjustable reach option, or swapping out the handlebars. I'm doing the latter.

There is also the randonneur bar, a drop bar where the middle bar arcs upward slightly at each end, the drops angle outward, and the drop is less severe than the standard design. Designed to be more comfortable for long rides. 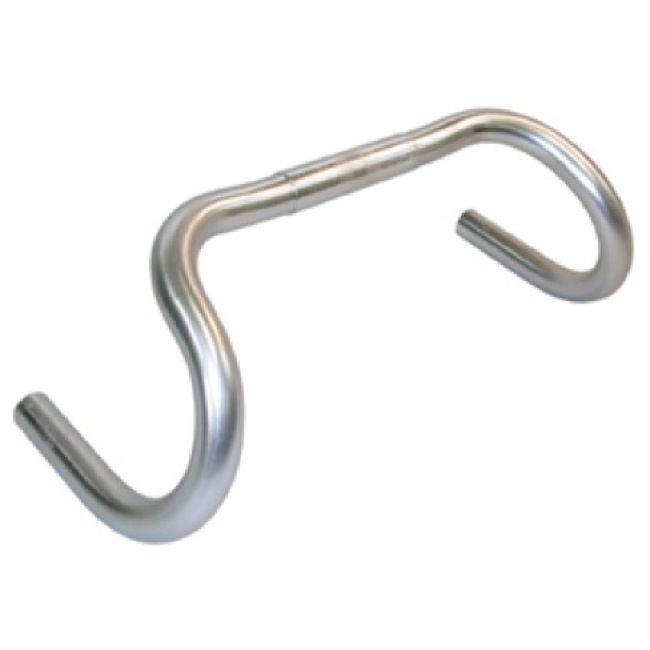 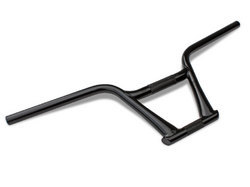 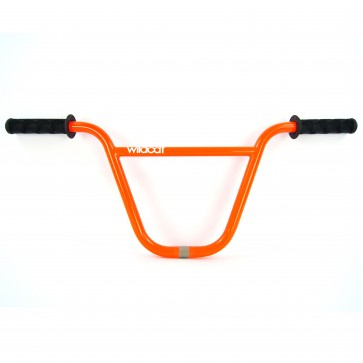 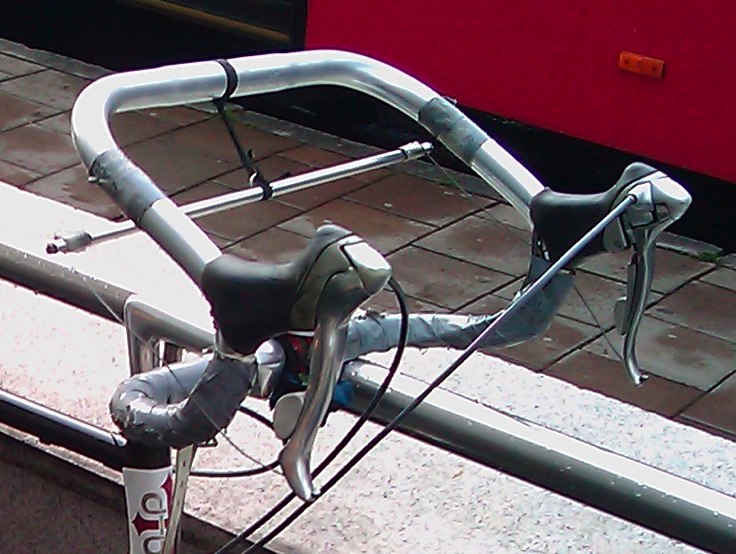 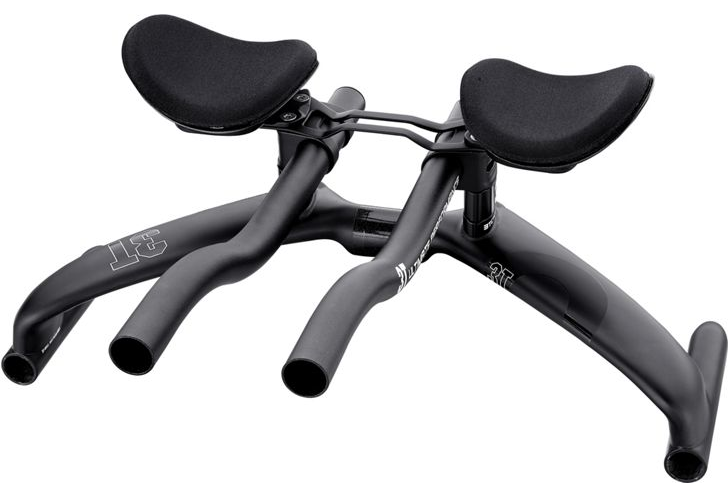 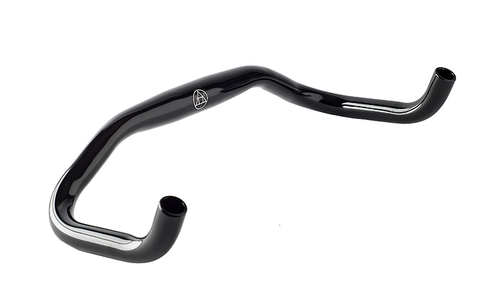 194
Terminology index - a list of bike part names and cycling concepts
28
What bike+equipment for a long daily urban commute?
24
Equipping a commuter bike for a 5 mile city commute
16
What needs to be considered when building a winter bike?
21
what benefits does a road bike give over a regular mountain bike for casual cycling?
2
Can I do brevets (long distance rides) on my hybrid bike? If yes, how to start?
5
Who else makes H-bar Loop Handlebars?
5
Upgrade my Globe Vienna for commuting and distance riding, or look for a new bike?
2
Straight or Drop handlebars?
2
Replacing a shifter
See more linked questions

194
Terminology index - a list of bike part names and cycling concepts
21
What height should drop handlebars be - relative to my saddle?
72
How to use drop handlebars properly?
11
My brake lever is coming loose from my handle bars; how can I tighten it?
1
Getting used to narrower handlebars
2
Straight or Drop handlebars?
4
difference in aero bar design
8
Does anyone sell a direct-drive recumbent with no handlebars?
1
Commuting on flat terrain/handle bar
4
Have old bar end shifters which don't seem to fit in the new handlebars