I'm planning to build a bike rack to store several bikes on the floor of my garage. Does anyone have plans for such a rack? We have a circular saw and a drill and the usual hand tools, but no router, so nothing too fancy, please! Something that can be made inexpensively from 2x4's and 1x3's would be ideal.

Edit: Hanging bikes on the walls isn't an option for me, I'm looking for floor rack designs only.

Edit2: After Gary.Ray's answer below, I came up with this: 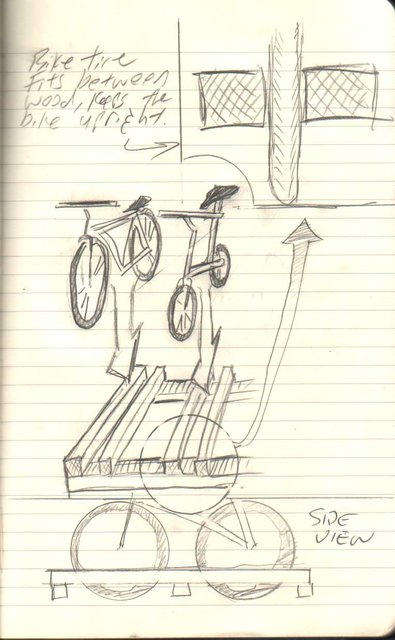 This link doesn't have printable plans, but a small pic and a detailed description. Basically it's a connected set of slots that sit on the floor. I've seen slot-based racks at triathlons lately.

If you are willing to expand your materials to PVC, I have built 4 racks that are variations of this plan. I think this has three advantages over wood:

Basically, the key concept for a floor rack is a slot approx the same width as the tire, with a little room to spare for the spokes. The slot can be horizontal like the wood plan, diagonal like the PVC plan, or vertical like the typical pipe rack found on city streets. Good luck, it sounds like a fun project.

If you don't mind punching some holes into the wall, the style my roomy and I have in our living room is very space efficient, and quite cheap. 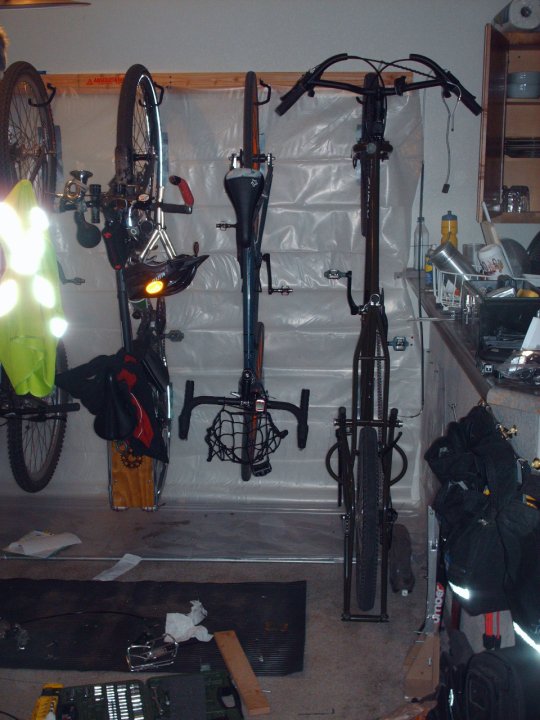 It is basically a 2x4 screwed to the wall, with hooks placed into it at a 45 degree angle. Because we both ride year-round, we put plastic don to save the walls, but being in the garage this may not be necessary. The plastic does make a good white-board, however (garage decorations!). Basically the wheel at the top is in contact with both the hook and the wall, and the bottom wheel is touching the wall. Alternating hanging the bikes by the front and rear wheel means you can put the hooks closer together, and put more in the same space. It is a very strong design, with ~8 drywall screws holding it to the wall. Strong enough to hold a Big Dummy (though the rear end of the Big Dummy does sit on the carpet), a Pugsley, and 3 other bikes.

The size of hooks may vary. For example, I have a large one for my Pugsley: 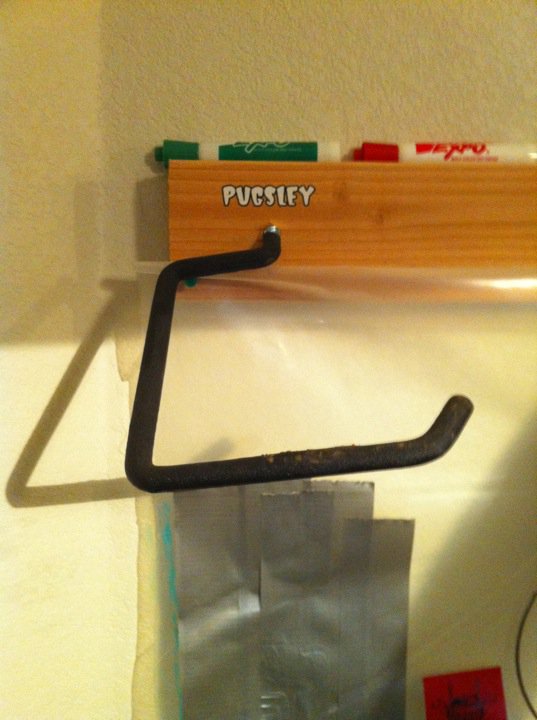 The plastic we used is also very cheap. I think it was ~15$ for 100 feet of the stuff. We plan to replace the plastic once it gets dirty, and I estimate the sheet we have will last 4-5 years. We also used patches of duck-tape where the tires hit the plastic in order to prevent the tires from wearing through too quickly (especially important for the bikes with studded tires).

I tried making a bike rack like the original poster's sketch, but wasn't satisfied with the result. The bikes aren't very stable because the rack only holds the bottom part of the wheel. It works much better to make the slots vertical instead of horizontal, so almost the full height of the wheel is supported.

I happened to have some six-foot long 2x4s and some 30-inch 2x4s. I butted them together and nailed them into a box, with the two long pieces forming the top and bottom of the rack, and the short pieces vertical. The bottom piece rests on the floor. I spaced the vertical pieces at varying distances to accommodate different widths of tires. 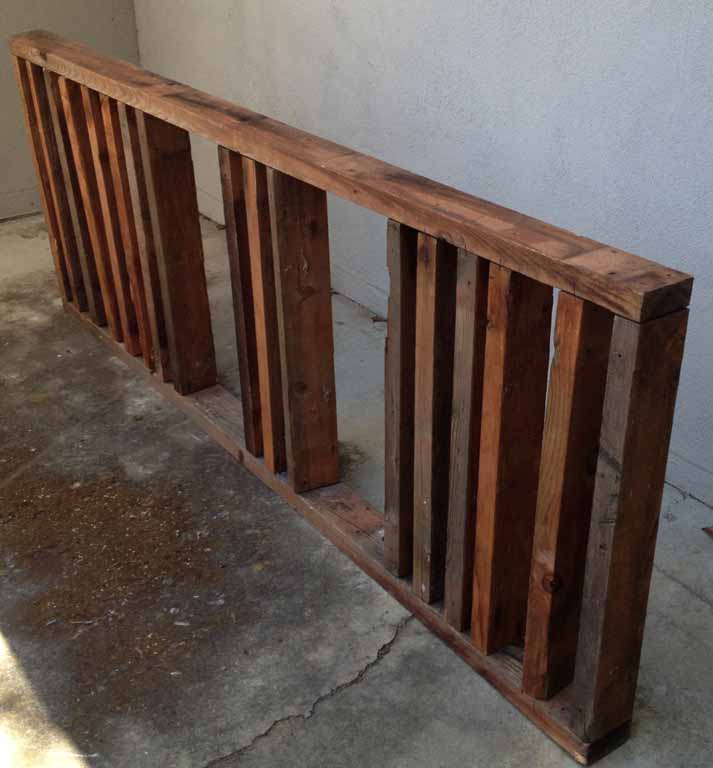 This rack (barely) stands up by itself, but becomes stable when you have at least one bike inserted into each side of the rack. 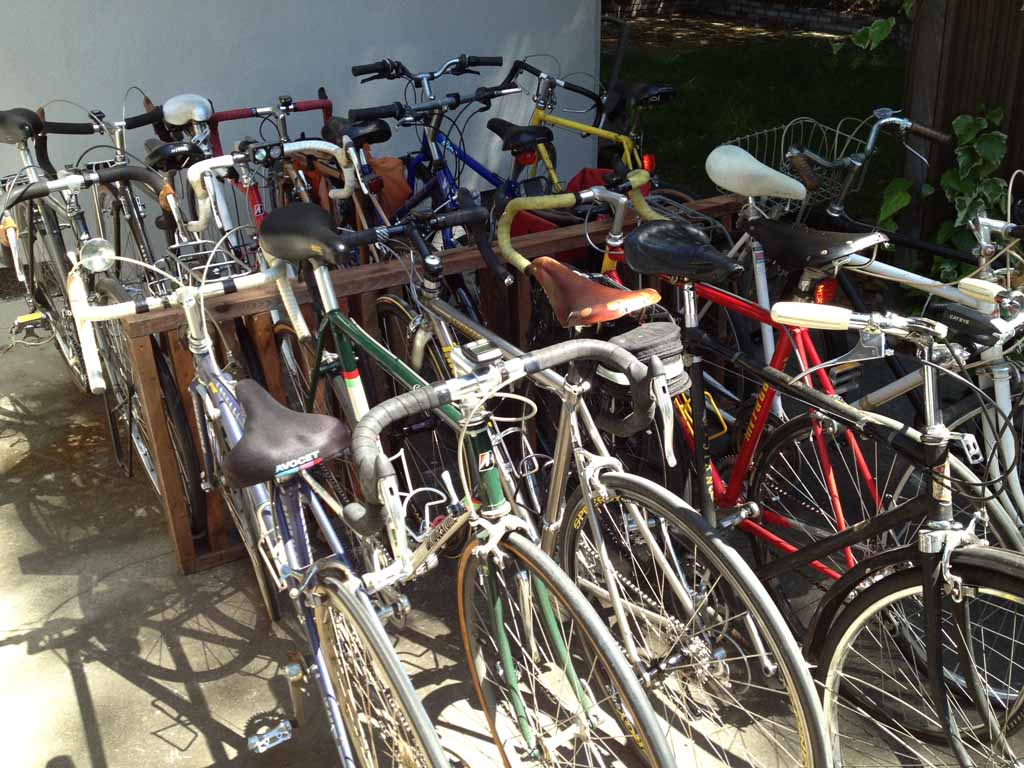 Based on your illustration you could find a wooden pallete that is the right size to hold the front wheels of your bikes. You can find wooden pallets in skips or building sites and if you ask nicely, they're usually free. It requires little DIY work other then a few coatings of water resistant wood dye 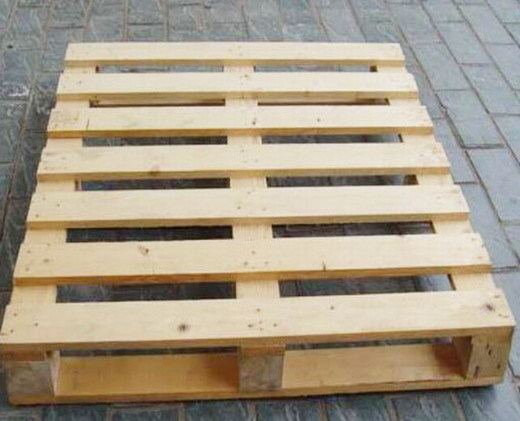 A quick search for "Bike Storage" on Instructables gives me somewhere in the region of a 100 results (not all of them are relevant obviously) which are listed here. You may get further with a different search. 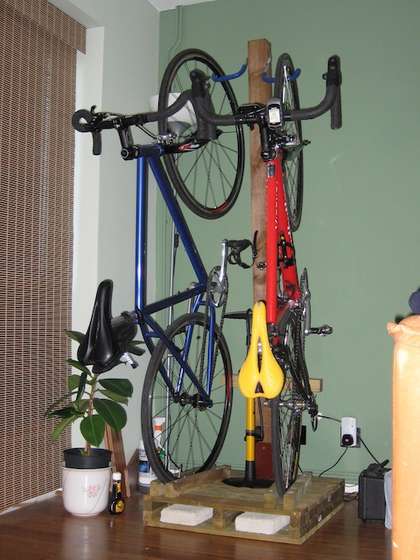 My first bike rack design (see my other answer to this question) was easy to make and held a lot of bikes. It was also free-standing, which is a necessity for those with no available wall space.

Still, there were two problems. First, it took a lot of floor space in my garage, 6 feet by 11 feet. Second, there wasn't a good way to use the air space above the bikes. Therefore, I built Bike Rack 2.0. The basic idea was to design a free-standing frame upon which to hang the bikes vertically from hooks. A roof would provide space for boxes of bike parts, wide enough for two copier-paper boxes to fit across the top yet not be so tall that the boxes hit the roll-up garage door. It had to be easy to make by a not-very-skilled carpenter like me. 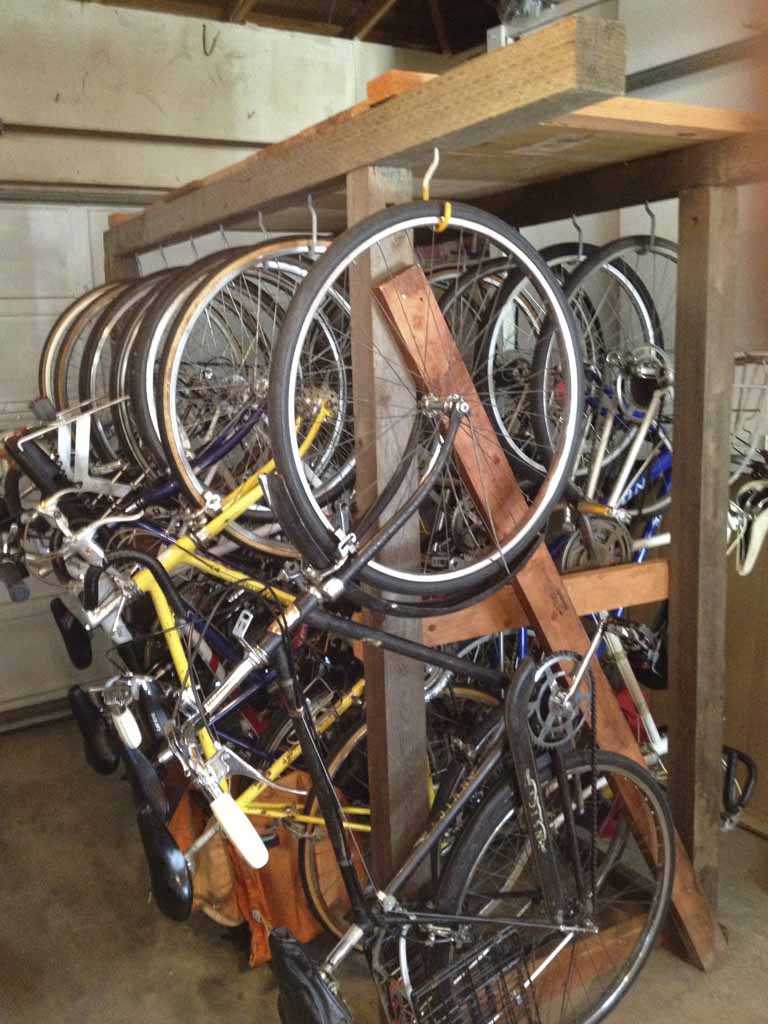 Besides the above concerns, this design was driven by the available materials. I happened to have some old fence posts, approximately 3.5" square. Four of them were 6 feet long after I cut off (most of) the rotten, termite-infested parts that were underground. The other two were pressure-treated lumber, approximately 8 feet long. I also had a number of 2x4s of varying lengths.

Conveniently, I determined that I could hang each of my bikes from a hook screwed into a beam 6 feet off the ground without the bottom tire touching the floor. If you ride larger than 56-cm or have a long wheelbase bike, you may need to make your bike rack a few inches taller than mine.

The bikes hang on hooks screwed into the bottom of each of two parallel horizontal beams. They hang at an angle, with some overlap. 36-inches of separation between the horizontal beams allowed the bikes to hang without bumping, but since your mileage may vary I encourage you to make your own measurements. 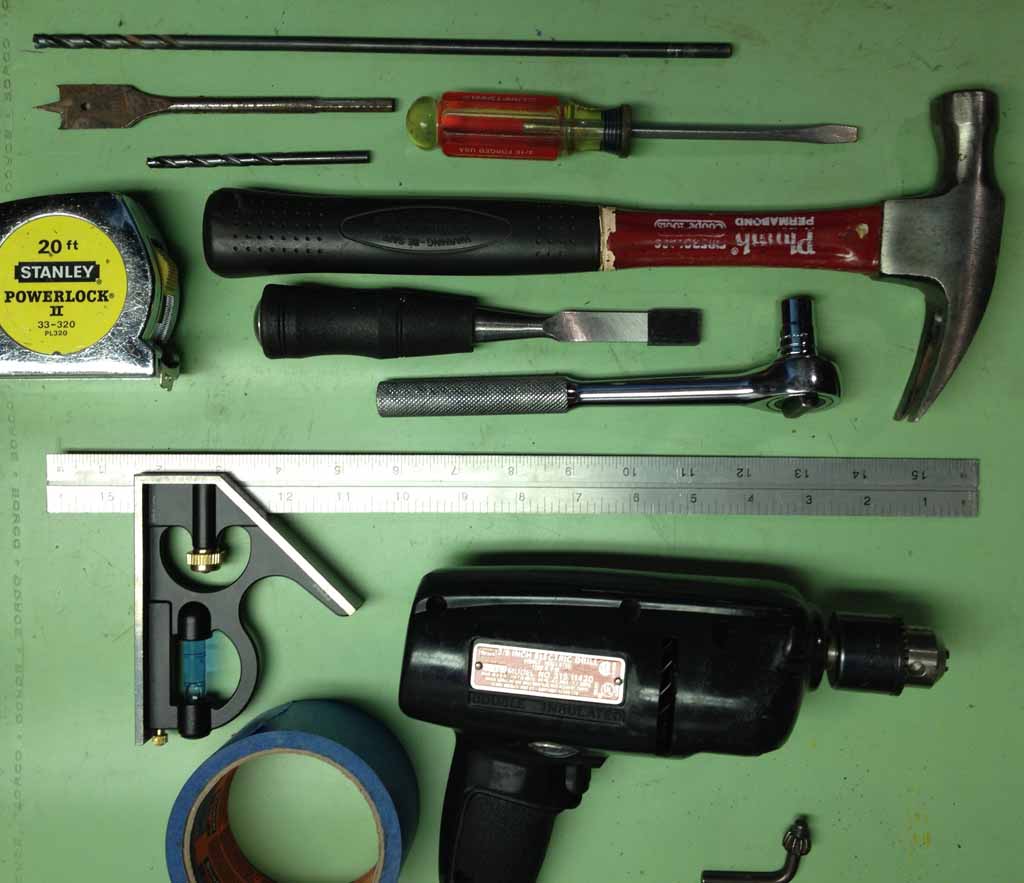 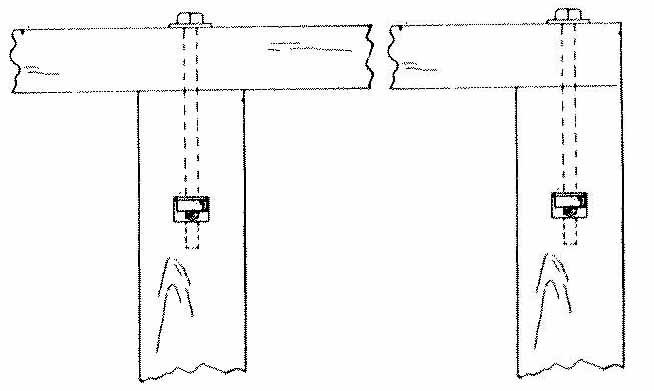 Begin by using the spade drill bit to drill a horizontal 3/4" hole a little more than half way through each vertical 6-foot beam, centered 2 3/4 inches from the end of the post. Use the chisel to square off the side of the hole that will receive the lower washer. 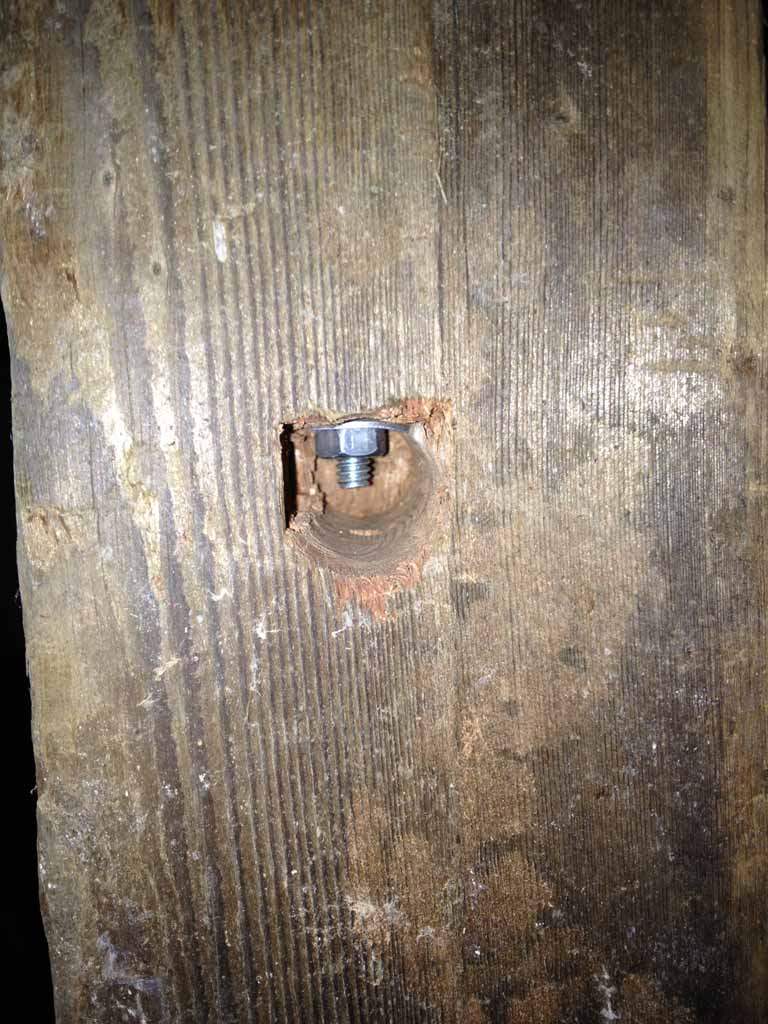 Counterbore the hole in the top beam. Insert the bolt with a washer. On the other end add another washer and nut. 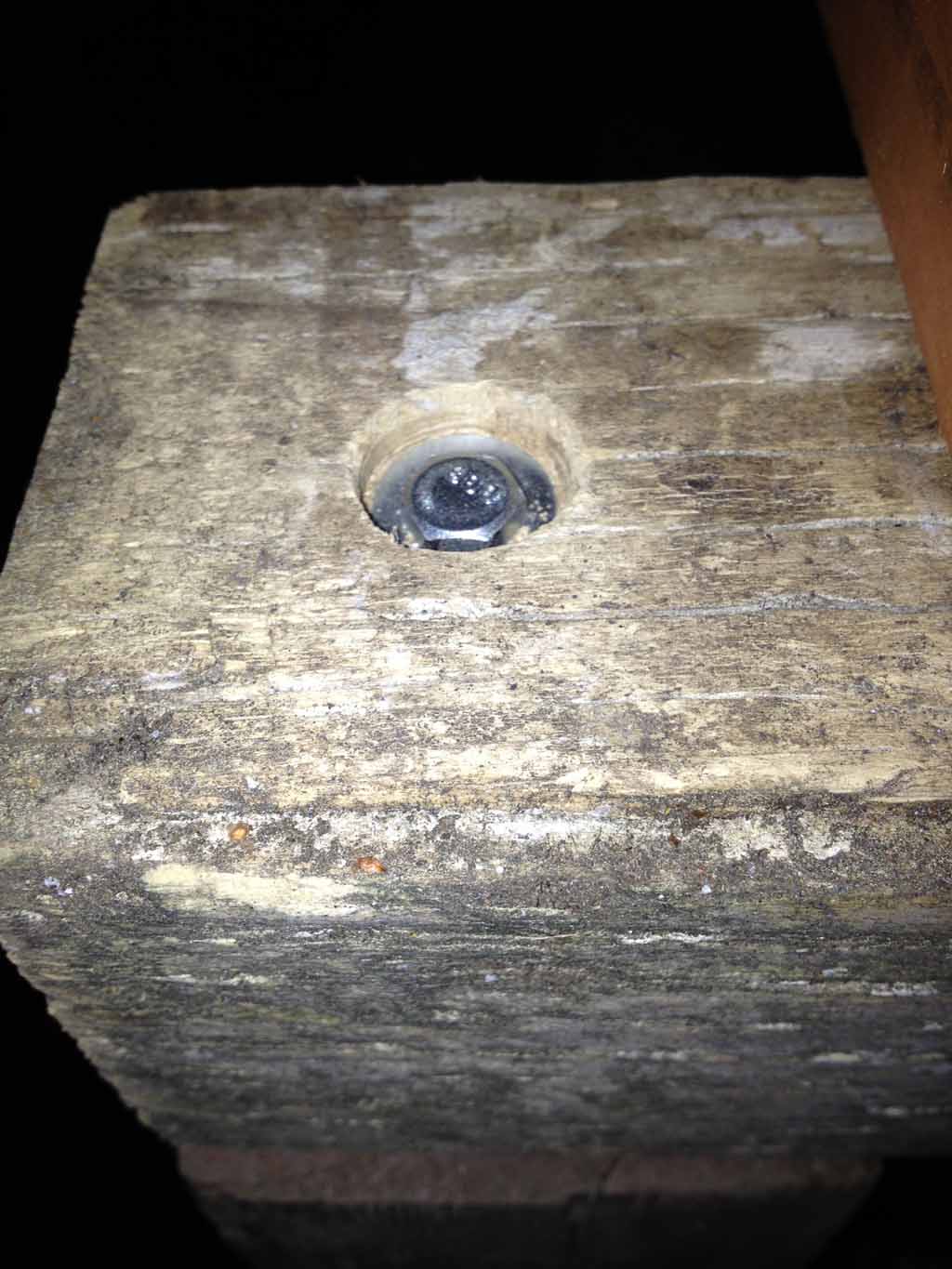 It was challenging to get the lower nut onto the end of the bolt, inside the horizontal hole. To do this I wrapped some tape around the end of the screwdriver, sticky side out. I used this to position the nut at the end of the bolt, while I tightened with the socket wrench. When I discovered that the horizontal hole was too small to get a wrench on the end, I jammed the screwdriver between the nut and the edge of the hole and managed to keep the nut from turning while I tightened the bolt.

Step 1 was by far the most time-consuming for me. An experienced wood worker with better tools might find this easy, but it took half of my construction time (1 of 2 days) to figure out how to do this and bolt the fenceposts together.

Step 2: Nail the two pieces together using 36-inch 2x4s. To hold them in place during assembly, I leaned one of them against the wall, and tied the other one to a ladder using some old inner-tubes.

The result resembles a long, narrow table 6 feet tall. I put one 2x4 at floor level, another 2x4 in the middle, and a third 2x4 on top of each end of the horizontal beam. The lower 2x4s go on the inside; if the long diagonal went on the inside it would create more interference with the bike that hangs next to it.

Step 3: Nail a diagonal 6-foot 2x4 cross brace across each of the narrow ends. This increases the stiffness of the frame by a surprisingly (to me, anyway) large amount.

Step 4: Nail a horizontal 2x2 at floor level to connect each of the legs for stiffness in the long dimension. Originally I used 2x4s here, but they interfered with a couple of my very long wheelbase bikes. The 2x2s provide just enough clearance for these bikes. 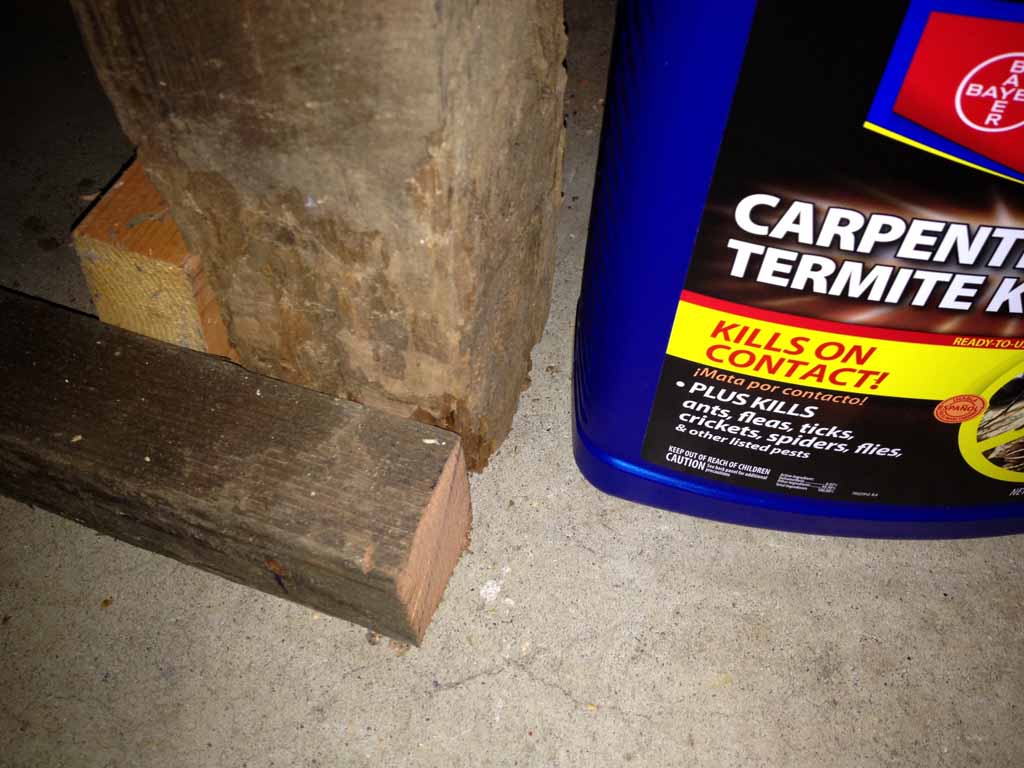 Step 5: Attach the hooks to the bottom of one horizontal beam. I put the first one 5 inches away from the end, and then spaced them 10 inches apart. This was wide enough for me to hang my bikes without bumping, as long as I alternated one with the front wheel up and the next with the front wheel down.

Step 6: Attach the hooks to the bottom of the other horizontal beam. Place these hooks so the bikes on this side hang between the bikes hanging on the other beam. For me, the first hook went 10 inches away from the end, with the remainder spaced 10 inches apart. A 7/32" drill bit makes the right sized hole for the hooks to go in snugly.

Step 7: Add the planks to the top. I just laid them on top, where by accident they fit snugly between the two 2x4s that are nailed across the top beams. If the planks move around when I'm getting boxes down from there, I'll glue them in place.

Because I used lumber on hand, the cost of materials was about $12 (mostly for the hooks). Then I spent $18 more for some spray to treat the termite-infested end of the fencepost; if I did it over again I'd probably ask my neighbors to see if any of them had an old fencepost that was pest-free.

Oh, and though I forgot to mention it earlier, you should wear safety glasses before pounding on things and maybe a dust mask or respirator if you're going to drill pressure-treated lumber or spray bug killer.

This appeared on the local ebay (trademe) today: 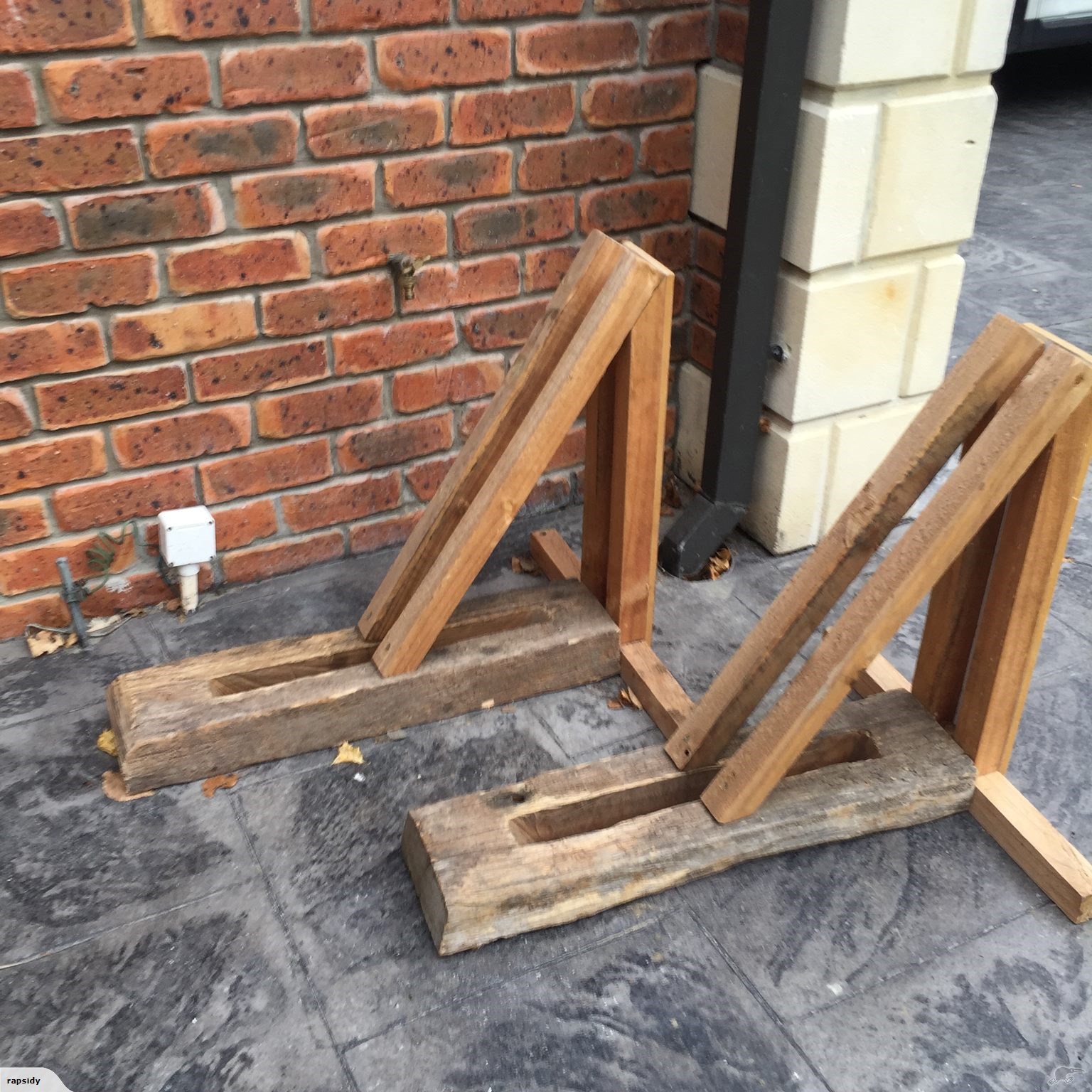 Looks like its made from 2x2 except for the main ground piece which appears to be a chunk of 8x4, which is about half of a railway sleeper.They're relatively uncommon, so you might prefer to sandwich up three pieces of 4x2 with the short edge down for a 6" wide base.

You would want to use galvanised nails at a minimum, and ideally treated wood. If standing on wet concrete, consider a length of malthoid or bituman moisture barrier underneath.

I'd consider putting several of these side by side and using one long bottom plate, and perhaps adding a top plate too.

This would be purely for storage - security would be fairly minimal unless you chain all the bikes together and around a secure anchor.

Not the answer you're looking for? Browse other questions tagged diy tools storage or ask your own question.

21
How to store bikes inside a house or unit with limited internal space?

12
Luggage rack attachments for laptops?
13
Can I store my mountain bike + suspension hanging from the front wheel for the winter (in an unheated garage)?
1
What is the maximum safe storage temperature for a bike?
3
List of tools to take apart a bike to minimise space for storage
11
Minimalist setup for a "travelling bike mechanic"?
1
Rear rack or similar storage options for child's bike (16" wheels)
1
Tips for amending apartment/condo bylaws around bike storage
2
Is It ok to store your bike outside for 8 hours/day?
0
Better Padlock for outdoor bike shed