I have been looking around for information on this topic but can't find anything definitive.

The tram routes through Manchester city centre are for trams (obviously), but it seems public transport can use the tramways as well. My understanding is that is legal for cyclists to use bus lanes, so does the same apply to the tram routes?

I also seen people cycling on the tramways, but are they actually allowed to do so? Just because people are doing it doesn't make it legal after all, as plenty of people cycle on the pavements as well (which in Manchester is a special kind of stupidity given how busy the streets are!)

Is there any official policy on the status of the tramways as cycle routes? I do know that Metrolink are rather hostile to cyclists, and I certainly wouldn't want to lose an argument to a tram whilst on a bike... 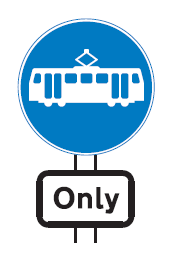 or road markings that say TRAM ONLY.

If cyclists are allowed on that particular section of tramway then it will be indicated by a sign, like this above or below the tram sign: 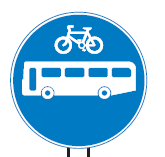 or the road markings will indicate that cyclists are allowed (this is from Edinburgh): 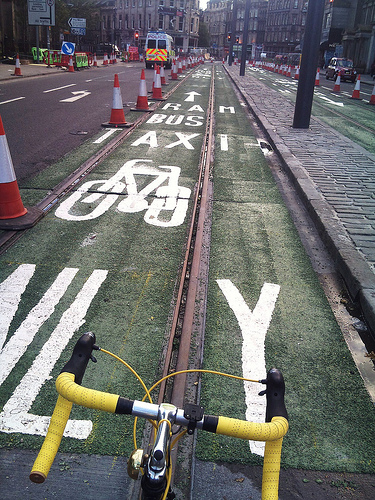 Legal issues aside, cycling along a tramway can be dangerous. This blog entry describes the problem:

The tram lines have also proven to be a nightmare for cyclists – set in smooth concrete or rough setts, with buses and taxis forcing your line and on dark and wet nights, many a cyclist has fallen victim to them and broken their bones and their bikes. It was apparent that the people behind Edinburgh’s tram had made absolutely zero allowance in their thinking around how cyclists might “interact” with tram lines when forced across them at shallow angles by poor road design and by other road users.

I wouldn't recommend it as a lot of accidents have occurred on the Dublin Luas system as well. The worst issue there is bike tires getting jammed into the track grooves and the cyclist narrowly avoiding death while the bike is mangled by the tram.

Not the answer you're looking for? Browse other questions tagged legal uk bikeroutes public-transportation or ask your own question.

18
Where can I find local bike routes?
6
Safe cycling lights red but the man is green
11
Is vehicular cycling legal in France?
1
Cycling on the sidewalk/pavement fines in belgium/netherlands
0
Best bike routes in Brooklyn
3
Finding better routes than bicycle apps suggest
1
Cycling near Hannover