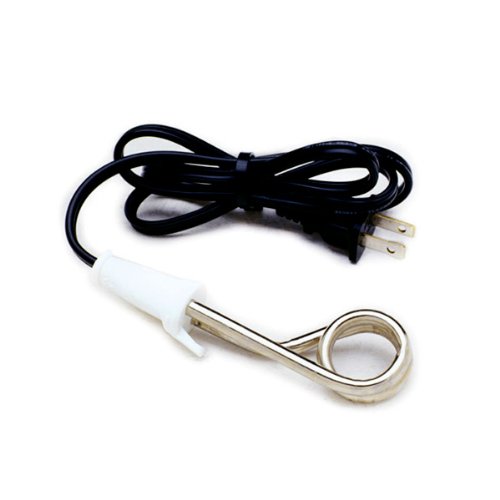 I have an identical problem, having been rinding the bike without seat clamp for more than two years now.

I suppose you have already read something about it, if not I recommend Sheldon Brown on the subject. But I must warn you that the ammonia theory didn't work for me, and I tried ammonia on some aluminum sample parts without any visible effect (corrosion, oxide removal, whatever).

I believe the solution, failing the chemical approach, must be oriented towards two possibilities:

I don't believe too much in brute force if the seatpost is frozen inside for too long (more than three months since last "movement"), but skilled shop owners have been asuring me that it is possible (I didn't go all the way with this for now because fortunately the current seat height is working and I don't want to risk being too many days without the bike).

Hope this helps, send some feedback if you get some result!

The problem I had was getting the ammonia to the corrosion. I hung the bike upside down by both tires so the seat post was vertical. You can either remove the bottom bracket or as I did the bottle cage screw and fill the seat post with straight ammonia. If possible plug the hole so the ammonia doesn't evaporate. I let it hang for 2 days. I then laid the bike on its' side and put a 36" pipe wrench on the seat post and cranked. It broke loose luckily before the seat tube bent. The key is time. The ammonia has to seep down the entire length of the seatpost. Let the ammonia soak for at least 2 days so the chemical reaction has a chance to happen.

Eventually got an aluminium seat-post out of an old steel Peugeot road-bike frame. It had been in for a couple of decades, never moved and was completely 'welded' in place. Tried penetrating oil, freezing spray, rotating in a vice, twisting with big mole-grips, etc - nothing worked. Eventually, cut the seat-post about an inch above the frame and tried the hacksaw blade method. This still didn't work as the post was completely welded all the way round and the bond was strongest right at the bottom. As a final resort, I used several different metal files to laboriously file away the seat-post in enough places for it to drop out. Took around 8 hours in total but at least the frame was undamaged, and now with a new seat-post (well greased), all is now fine. 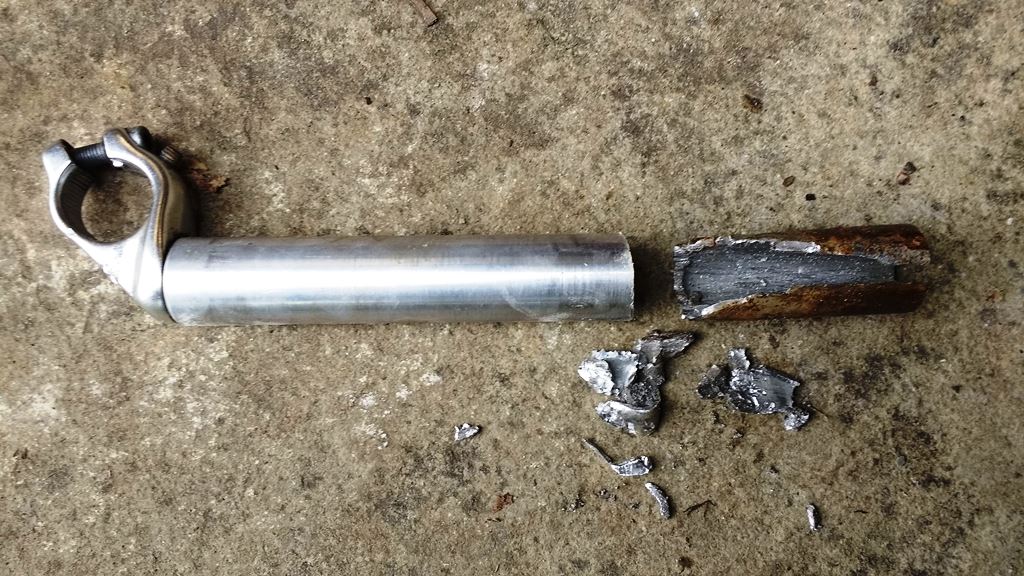 Your seat post is dead- don't bother trying to save it.

I got one out by crushing the end of the seat post in a vice with the bike upside-down. Then asking two people to twist the bike frame around while I hauled on a block and tackle to raise the bike up off the seat post. The saddle was already removed and the tackle was fastened back and forth around the bottom bracket, to spread the load.

What worker for me was acetylene blow torch and heating the seat tube not the seat post. It will damage the paint and you really need to be careful to not overheat it. Go slow and steady move it little by little. lol. If you try with force most likely you will end with damaged frame. Just never use force if it's badly stuck. I have seen a lot of frames that steel pieces came out with the seat post. Even holes on seat tube.

The caustic soda works well, but if you cut off the seatpost and put a cork in it,you can pour the solution in from the BB shell and it's less messy

you can try to use caustic soda. It will melt down the aluminum. But you have to be very careful. Watch this video

Return to the past.

When an aluminum seat post has locked into the steel frame it can be removed with a hack saw and a another hack saw blade mounted in an end of blade handle.

Use the regular hack saw, the blade is held at both ends, to cut off the seat post about a 1/2 of an inch above the frame. With a standard hack saw blade and end of blade handle cut the aluminum seat post vertically. You can make such a handle with part of a wooden broom handle and 2 wood screws. Cut the seat post to create a vertical split down the length of the seat post.

You have to do this carefully. Keep the blade moving straight in and out of the seat post. Make it so the seat post is horizontal to the floor, cutting will be easier. When you have a full length 'split' you can collapse the seat post with channel lock pliers or a vice grip.

Once collapsed the seat post can be rotated in the frame and removed.

I worked on an aluminum seat post in a steel frame for several weeks.

With all hope gone, I took it to my local repair man who had it off in less than ten minutes BUT he will not tell me how he did it, and he did not use any heat or chemicals that I know of.

The last stuck seatpost I removed was also the worse I'd ever had. I kept the frame inverted and filled the seat tube from the bottom bracket with Kroil, to a level above the post. I checked it at intervals and ended up soaking it for a few months. I clamped the seatpost in a very large vice that is bolted to a heavy workbench and eventually hard twisting back and forth caused the post to break loose. It still took a lot of soaking and twisting to get it all the way out. Caustic soda would have been more satisfying and faster, but I wanted to preserve the paint, if possible.

I spent years wrenching in bike shops and this was not the type of job we liked to take in, especially during the busy season. If the post wouldn't move after a reasonable amount of soaking and twisting the saddle, we'd return the bike to the customer and tell them to bring it back in the fall, which they never did. The trick is to avoid wrecking the post in that initial attempt.

Never wail on a stuck post with a hammer. If anything, it will wedge the post in even harder. When your arm gets tired, which will happen quickly with a 3 lb sledge, you'll likely hate yourself when the hammer glances off and dents the top tube. The hacksaw method is far more difficult than it would seem to be, even with only the minimum amount of post in the frame (would you be so lucky). We once had a bike come in where the guy had cut off the post, slipped a bent rod through it, hooked it on the bottom of the post, and proceeded to apply enough force that the rod punched a hole through the seat tube. If you can't move the post by twisting, you're never going to get it to slide.

Removing a stuck seat post takes finesse, it is like dealing with a broken off stud. you need to go slow and be careful or you will make it worse.

Mechanical removal (I have done this successfully): you will need some hacksaw blades, a flashlight and optionally a large drill or possibly a unibit with an extention. 1)cut seat post off about 1" above frame. 2)using a large drill, drill through the center of the seat post. The intent is to reduce the seat post wall thickness for the next step. 3)Using a hacksaw blade, carefully cut a slot inside seat post. you need to go slow here and not rock the blade. you do not want to cut into the seat tube. Use a flashlight to monitor your progress. the slot needs to go the full length of the seat post. Ideally stop before you cut all the way through the seat post. 4)use a pipe wrench and see if you can twist out the seat post, if not cut a little more on your slot which will allow the seat post to collapse. If needed cut another slot at 90 degrees to the first slot so you can remove a slice.

Chemical Method, only to be done on steel frames. (I have not tried this method to remove a seat post but theoretically it should work): cut off the seat post 1" above the frame. remove bottom bracket, turn bike upside down. put a rubber stopper in the seat post. fill seat tube up with hydrochloric acid (muriatic acid) available at hardware stores. This will not damage the steel, but will eat away aluminum. It will attack the bronze brazing if given enough time, so keep the acid out of the seat stays and away from the brazed joints. It will also damage the paint. I suggest you do a test with a piece of the seat post first and see how long it take to eat through it. Muriatic acid from the hardware store is 30%. for this application I would use it full strength (I have used a 10% muriatic acid solution as a rust remover inside a frame for 1hr with no structural damage to the brazed joints.) Pull the plug to drain the acid and wash down with water before wrenching on the seat post. Read up on acid safety if you have not worked with acid before.

Sometimes your just lucky. Soaking makes sense.maybe its the concentration of amonium,2-3 percent in regular store.they make 30-50 percent concentrated also,use outside only is you find it.There are sources online for liquid fertilizer 82-0-0,but has some sulfur;hope to try.

Not the answer you're looking for? Browse other questions tagged seatpost steel aluminum corrosion or ask your own question.