Is it safe to Cycle with an Umbrella?

Is it safe to cycle while holding an Umbrella?

Obviously it's at least a little less safe than biking without holding something in your left (or right) hand. But how much more dangerous is it?

Specifically, suppose that I'm biking on a flat-ish, smooth surface, on a day with almost no wind (say 5km/h), at moderate speeds (say 15km/h) and in enough rain that the umbrella is helpful.

I commute by bike every day, and have recently moved to a new location where the weather often produces these conditions, and where the folding bike and roads I ride on often lead to the above scenario. Recently I have begun riding with an umbrella in hand after observing several other riders doing so, and have fallen off thrice while learning, producing one minor injury to my toe. For comparison, I had one fall and no injuries while learning to use clipless pedals, and one other injury-free fall in the last 5 years.

What I really want to know is this: Assuming someone does this regularly (presumably like the other riders I see), is someone who rides in the conditions mentioned above 10% more likely to suffer a serious accident or 10 times more likely? In the former case, I view the enjoyment / safety tradeoff as being clearly in favor of the umbrella, in the latter I take the opposite view and will stop doing it.

Ideally I'd like to see a study on the subject, but since such a thing doesn't exist (AFAIK), guesswork or anecdotes will suffice. 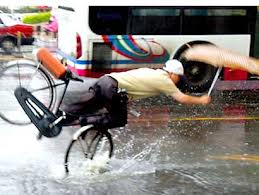 No. Cycling while holding something in your hand is inherently dangerous. You have much less control over the bike and you can only operate one of the brakes.

You can buy various contraptions for attaching an umbrella to a bicycle. There's also the Uberhood: 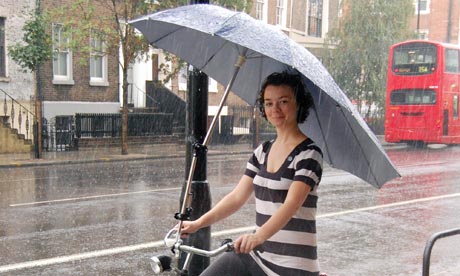 However, this got a poor review in The Guardian Bike Blog:

once open atop the bike it refused to stay stationery, with thoughts of impalement on my mind. In the rain it blocked my rear view, before suddenly hinging forward 90 degrees like a sail, blocking my forward view and knocking my front light off.

No. It absolutely isn't.

You know what happens when an umbrella catches the wind.

Imagine that on an unstable device doing 30 mph.

Even without wind the rain will be blowing in your face most of the time so you'd have to place the umbrella right in front of you for it to offer any kind of effective shielding from the rain. How are you supposed to see anything with an umbrella in front of you? Even a transparent one will be rain-soaked and impossible to see through.

And that's not even considering the fact that you've got one hand off the handlebars all the time. How are you supposed to signal a turn if you only have one hand on the handlebars anyway? And God help you if a child runs into the road in front of you and you need both hands to apply sufficient braking.

You shouldn't even consider it. Get a rain coat.

Maybe you could strap one of these to your helmet. 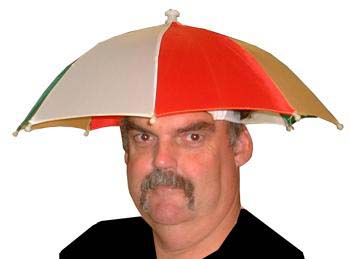 Then at least your hands are free and it's always pointed in the right direction. It'd probably get torn away in super high wind (hopefully not with your head).

I couldn't find a picture but you could even try it with one of those deep, shoulder width, clear umbrellas too. Then your shoulders would be covered too.

I will share how do I commute in rain to work. I haven't tried an umbrella, however. A long raincoat, plus short pants and sandals keeps me dry during the wearmer months. If you go this way, pаy special attention to the hood - ideally it should have two adjusting straps - one for face aperture (the one on the picture has) and one for depth of the hood - it is on the upper and back side of the hood and is essential to adjust your hood so that you see well, and are still protected. 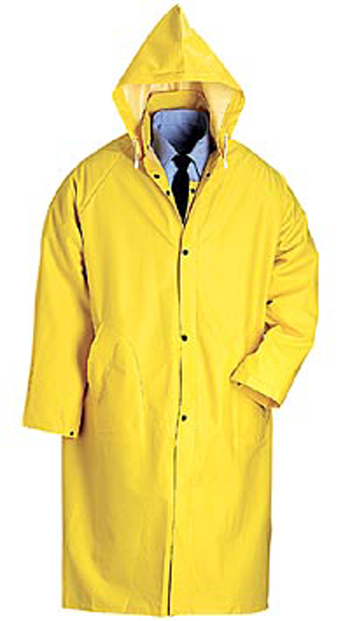 Not only is it not safe, it isn't even useful.

Some of the biggest problems when cycling are visibility, stability, braking and hearing danger approaching. An umbrella of any kind will hinder at least one and probably all of these!

And to top that, it will not stop you getting wet. On a bike on a wet day water comes from everywhere: your own tires, spray from cars,puddles, rain ...

The trade off just isn't worth it- bicycles are an inherently dangerous way to travel as there is nothing to protect you. You should be doing everything you can to reduce your risk, not add to it.

Not the answer you're looking for? Browse other questions tagged safety weather rain or ask your own question.

4
Speed wobble safe fall?
6
Is it safe to ride with one missing chainring bolt?
3
Is it safe to ride with bent fork?
8
Do the benefits of clipless pedals out weigh any danger they may pose the rider?
4
Are there fenders designed specifically for bikes with racks?
12
How close to the kerb should I cycle?
4
Will driving through heavy rain with bike on my car damage the bike?
8
Are children's helmets with styling less safe?
10
Roadbike with aluminium wheels in mountains. Is it safe?
50
How can I make it clear to other road users that I'm an inexperienced cyclist?