Am I better off buying a new bike, or upgrading my old bike?

Half a year ago I started to use again my old Schwinn Woodlands MTB for commuting. I didn't want to spend a fortune on a new bike, I wasn't certain that I would like to bike commute daily.

Since then I used the bike a lot mainly for commuting, touring. Now I'm at a crossroads. I'm thinking of buying a new bike (brand new or used) or re-equipping the old bike. I would like better brakes and a bigger gear ratio on a workhorse.

If I buy a new bike, I would probably choose a new or used Merida Crossway 100D /Speeder/S-presso. I think a trekking bike would be better than MTB because of speed. I've tried a Crossway but at first it was strange, although I loved the big gear ratio and disc brakes.

If I would reequip my bike, I would use Shimano Alivio V brakes (maybe with red/blue Ritchey brake pads), derailleurs and shifters and 7-8 level sprockets. I also need to change wheels.

My dilemma is that is it worth to spend half price of a used bike to my old bike? to reequip? Or is it better to sell it and buy another (new) bike. There are used bikes with quite acceptable prices.

2012 models are on sale nowadays, although I'm a bit skeptic that I really need a brand new bike.

What do you think?

As @Daniel said - I would suggest looking for a newer second hand bike closer to what you want. the cost of components, along with compatibility issues, will like make the exercise more expensive with a bike that has a few niggly problems that just won't go away. However, it you are particularly attached to the frame, it might be worth while. Consider getting a donor bike, as whole bikes are usually significantly cheaper than the sum oft there parts.

If you go down the seconds hand or new path, Jamis (an I am sure others) make mid and high quality steel bikes (Look for the Dragon range in MTB) for those of us that appreciate the advantages of steel. At the highest end, the weight penalty is so small it can be ignored.

I have an '86 Peugeot Orient Express which is not too different than your Schwinn. The bike pictured below is very similar to mine. 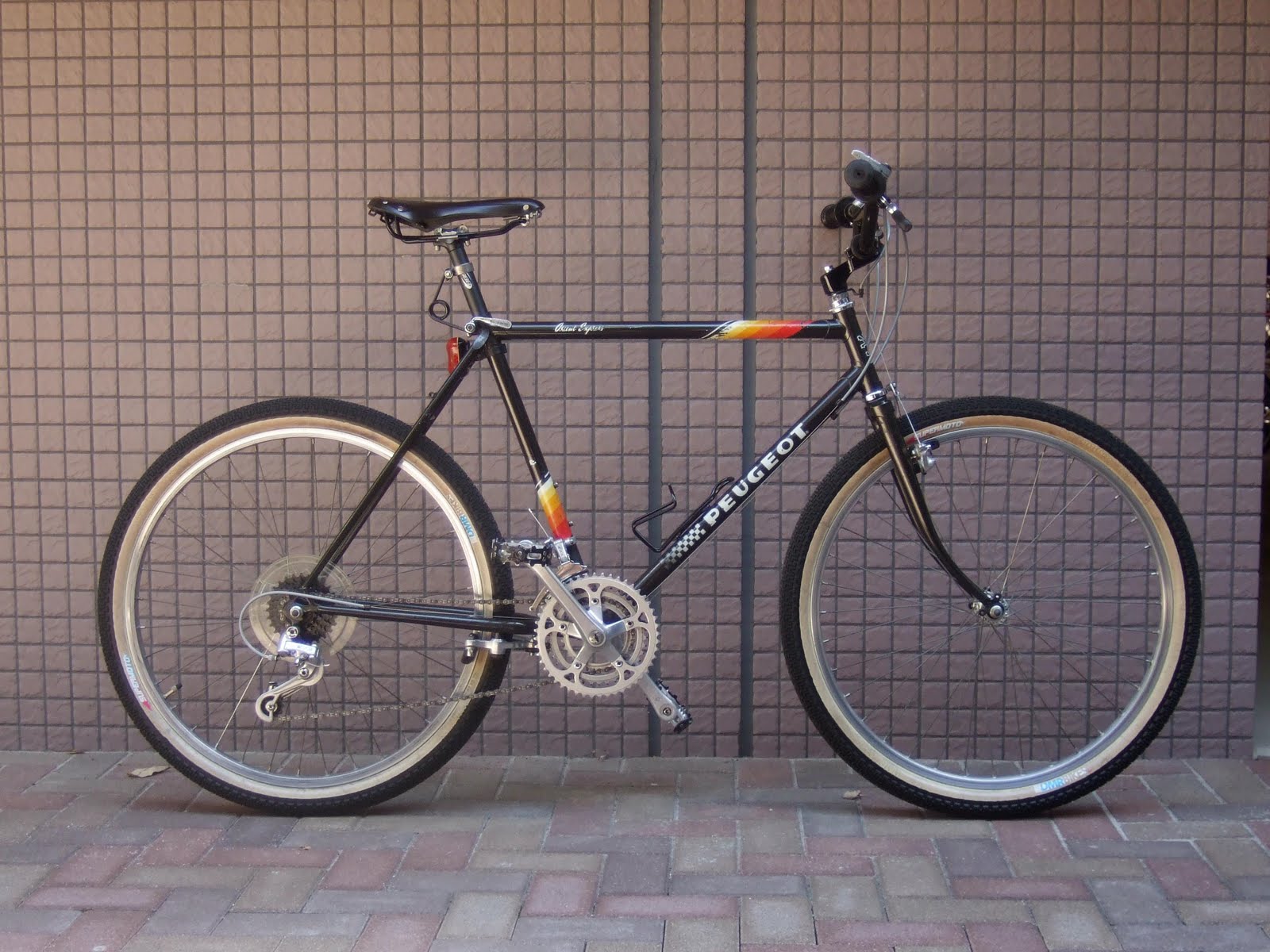 I have not used the bike as a commuter, but I have put around 1400 miles (2250 km) on it in the past few years. It's a great bike, very well-built, with gearing similar to yours. I use it as a townie, when riding with the kids, etc.

My only real complaint is that the handlebars are flat. For short rides, I can live with that, but for longer rides (>20 miles/32 km), I don't like it at all. I like moving my hands around on the bars as I ride. I've even considered putting some road bike handlebars on it, just so I could move my hands to different positions when riding.

The only things which have stopped me from upgrading significantly are 1) my Peugeot weighs around 35 lbs (about 16 kg); 2) it would be difficult to use the current brake levers and shifters on road bars; 3) in for a penny, in for a pound: if I am going to upgrade, why dick around? In other words, I would want to get rid of the heavy bolt-on wheelset, the drivetrain, everything. That means some serious dollars.

The frame on that Peugeot is Tange gaspipe, which rides great, but I think putting big dollars into upgrading would, in some sense, be like perfume on a pig. It borders on false economy, considering that a much nicer, lighter, more modern bicycle can be had for just about the same money.

The Meridas you linked look OK, and if you can afford decent components, that might be a good choice. Here in the USA, you can get some pretty decent deals on similar bicycles from online sellers. I don't know if there are equivalents in Australia.

But if I throw in my $0.02, assuming you will be riding the bike a lot-- commuters can really rack up the miles-- and that you can secure the bicycle adequately at work, I'd encourage you to get a full-on road bike. I know of riders who went with a hybrid bike and regretted it later, as evidenced by their road bike purchases, but I don't know of any who went with a road bike and later decided they would be better off with a hybrid.

If necessary, make do with what you have at the moment, and save for a better bike.

Not the answer you're looking for? Browse other questions tagged brakes commuter frames shifter urban-riding or ask your own question.

25
Upgrading straight handlebars to drop handlebars
5
Shimano Sora shifter having trouble in the snow
4
Brake lever and shifter for bullhorn
3
What to do with the new parts on an old bike I want to dump?
4
Brake pads from new dual pivot calipers dont reach the rim in the rear wheel
2
New 2012's Sora 3500 vs used 2003's 105 5501
0
Shifter/brake-lever compatibility with front and rear derailleurs
3
Do dirty brake pads cause them to wear faster?
2
Upgrading an old road bike
0
Drop bar ends and brakes