I recently got a Tacx Flow trainer, this being the first time using a power meter. For about 10 years, however, I have been doing monthly "uphill time trials," whereby I put the time into that formula which, supposedly, determines your power. (Mass X height of climb, divided by time (seconds) = Newton meters X 10 = watts.) For that, I've been averaging about 300 - 330 watts for around 13 - 14 minutes. Yet, on the Tacx, I've done just an 8 minute effort (for determining CTS training zones), and can only manage 250 watts. I realize neither of these is going to be as accurate as a PowerTap or SRM, but that seems to be an awfully large discrepancy, especially considering how its the shorter effort is so much lower. I know fatigue starts setting in, but on the Tacx, it seems like the resistance is gradually increasing, or some thing. Or, is it possible something isn't set up right? (Yes, I did put my body weight in.)

I will presume you are asking about the types of trainers that one mounts one's own bike onto, and not a dedicated "bike" trainer such as a Monark ergometer or a CycleOps Indoor Cycle (ergometers such as these are used in exercise physiology laboratories and can be calibrated to be very accurate).

Consistency and Accuracy of Speed Measurement

Accurate power measurement in most indoor trainers depends on accuracy in speed measurement. A full description of the relevant factors is long and complex. The short answer is that some indoor trainers are more consistent and accurate than others, and we can group them into rough categories.

In general, accurate power measurement from an indoor trainer depends on a consistent load response with respect to speed. Thus, your question is equivalent to asking, "how consistent is recorded speed for a given power input?" If that relationship is consistent then you can simply put a speedometer on a trainer and convert the observed speed to power. A handful of modern software applications (e.g., Trainerroad or Golden Cheetah) do essentially this: one mounts an ANT+ speed sensor on the bike and, if the trainer is consistent in its response, the application converts that speed into power.

The speed-power relationship will depend on tire pressure, the tire-to-roller contact pressure, the ambient temperature, and the type of resistance unit used by the trainer to generate the load. For example, common types of load generators include wind fans, magnetic resistance units, fluid resistance units, and electric load generators; rollers use frictional resistance generated by tire deformation, belt losses, and (a very small amount of) aerodynamic drag generated by the spinning rear and front wheels. Wind-turbine fans tend to be quite consistent as long as the tire-to-roller contact patch is consistent and air density is constant. The relatively new Lemond Revolution Trainer uses a large fan directly driven via its own cassette so does not rely on a tire-to-roller interface and independent tests have shown that its speed-power response can be both precise and accurate. Some discussion of how the tests were performed and the drag parameters were estimated are here. As an aside, wind turbine trainers tend to be quite noisy.

Because the load generation on a set of rollers is mostly determined by rolling resistance it, too, can be quite consistent. Measurements with a calibrated Power Tap show that if tires, tubes, air pressure, number of wheel spokes, and total mass are known, rollers are extremely consistent: consistent enough that high precision estimates of rolling resistance can be made using this setup. For example, the differences in the rolling resistance of tires and tubes described at biketechreview.com were measured using rollers and a calibrated power meter.

Among the trainers with electrically-based load generators, the Computrainer, the Velodyne, and the Velotron are reportedly consistent and can be calibrated to be accurate against a known accurate power meter.

To demonstrate consistency of the Tacx Flow, I collected the data below with the same tires, same tubes, same bike, and same rolldown calibration number (of zero). The black and red dots were collected four months apart in time, for four different "slope factors" and demonstrate that over that period the speed-reported power of the Flow was consistent. 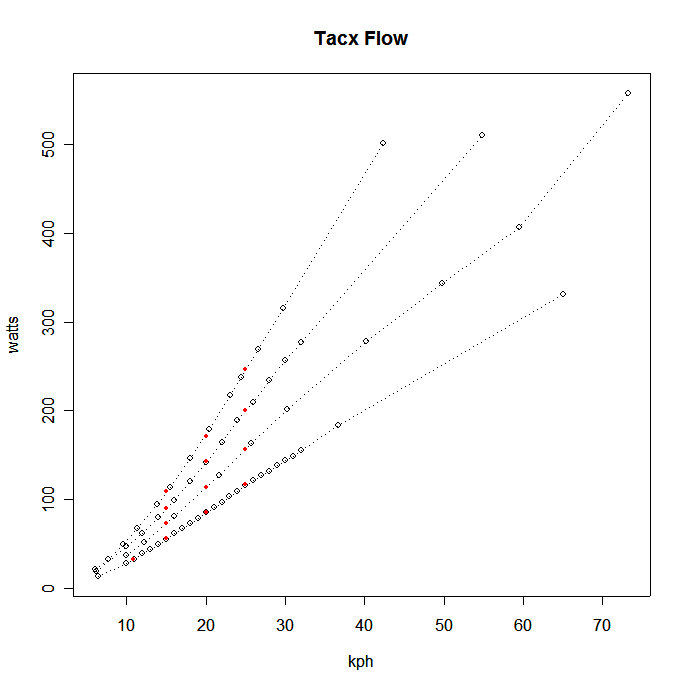 However, while consistent, the Flow was inaccurate. There was no combination of calibration number, scale factor, and slope that I could find that would produce accurate power estimates across the range of speeds tested (accurate compared to a known-accurate Power Tap). Since I had the Power Tap, I quickly gave up trying to find the "right" parameters. However, over a "moderate" range between 200 and 300 watts, a scale factor of 85 and a rolldown calibration number of 4 came close -- above and below that range, the Flow grew worse.

That was for the Flow in "trainer" or "slope" mode. In "ergo" mode, where the Flow is supposed to adjust the load in order to keep power constant even if the rider changes speed and cadence, its performance was abysmal. In the plot below, three different scale factors were tested for a set ergo power level and varying wheel speed. If the Flow had been able to adjust the load to keep power constant at varying speed, power (as measured by an accurate Power Tap) would be independent of speed and each group of dots would be horizontal. As can be seen, they are not. This demonstrates that in ergo mode, the Flow's load generator is easily overmatched at high and low wheel speed. It is thus wise not to rely on the Flow's ergo mode. 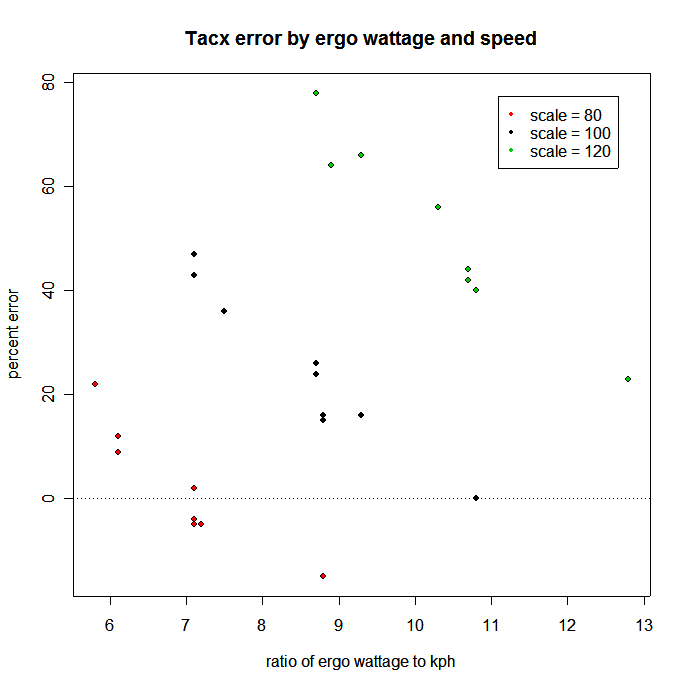 I find that my 8 minute TT outdoor tests always result in a higher wattage average.

Even comparing PowerTap to SRM will result in some differences, but if the trainer gives you repeatable wattage's (as well as always pumping the tire to same psi and set same resistance of trainer to your tire), then you can do your indoor training based on those numbers and use your outdoor numbers for outdoor training.

I see the Tacx Flow on the beta list of compatible trainers for training via virtual power on the Trainer Road website (which means it has a published power curve), so I suspect that the trainer does produce repeatable power resistance and wattage's.

24
How do bicycle power meters work?
5
How accurate are the power numbers from a Tacx Flow?
2
How can i calculate the power in watts on an indoor trainer
2
Proper Weight input for a indoor power meter
4
Can I use Edge 510 as an indoor trainer computer
4
Indoor trainer suitible for sprinting
1
Speed to power calc on a 'basic' magnetic trainer
1
Can single-sided Power meters cause unnatural Bilateral asymmetric pedaling?
6
Can pedal-based power meters be used as flat pedals?