How to inflate a tire with a Presta valve?

My new bike has these thin tires with a type of valve I haven't usedbefore. I searched online and found out it's called a Presta valve, and it's pretty common and popular. I'm finding it annoying and fiddly and don't know how to use it properly. I have a floor pump, and I know the valves and pump are fine, because the guy in the shop had no trouble using the same one. But after reading online and watching YouTube videos I still can't figure out how to do it properly!

Now, either it flops around loose and leaks air out the sides (when I push it on gently), or sometimes it goes on but then the tire doesn't seem to inflate any, the pump just gets stiff really quickly as if the valve was blocked - then I remove the attachment and it goes pffffft like all the pressure was just backed up in the hose and not actually going into the tire.

I was able to pump up the tire eventually, but it took me about an hour of stuffing around and my "project manager" got angry, because I was supposed to be in the kitchen making her a salad, not mucking around in the garage.

The time I got it on properly I had to deflate the tire completely, and even then it was difficult because with the tire completely deflated the stem of the valve just pushed into the rim. Surely this is not normal? What's the trick of attaching the darned thing?

Also, how can I just check the pressure? When I attach the thing I expect the guage to jump up and show me what pressure it's at, but it just stays at 0. The tires say on the side to inflate to 110 psi (7.5 atm), but my pump only goes up to 100. 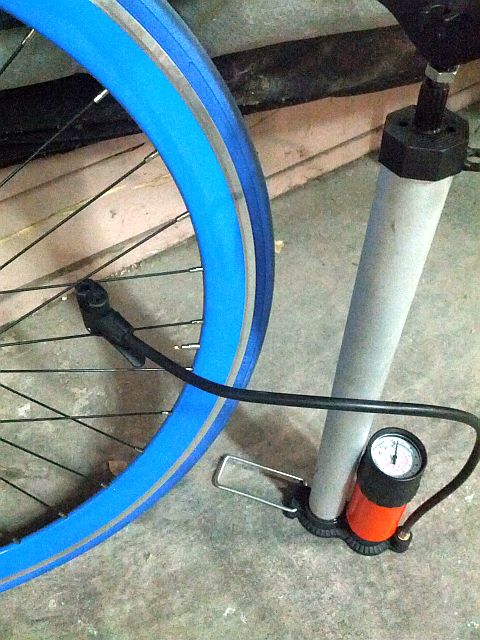 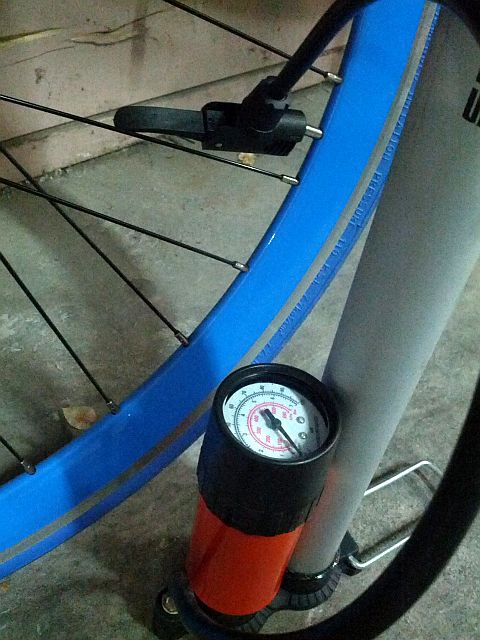 Those valve stems are too short for those deep deep rims you've got on there. You can tell just from the photos that the valve stem isn't sticking out far enough from the rim for the pump to fit all the way on it. Hence, it's not contacting the valve enough for you to inflate your tires.

For shorter stem presta valves in deep rims the trick to fill air is to first deflate the tyre about 50%, then push the pump head onto the stem with one hand while at the same time pushing the stem through the rim from the tyre side with your other hand. Then use the lever to get a good seal.

When you pump it up, the increase in pressure in the head of the pump will depress the presta valve on its own. As Daniel Hicks said in a comment in this thread:

There is no need to depress the stem in a Presta valve, since air pressure will open the valve when the pump develops more pressure than is inside the tire. All that's necessary is to briefly tap the stem before putting on the chuck, to make sure that the rubber gasket is not stuck closed.

"Remove valve cap, unscrew thingy in valve, and tap it a little - a jet of air shoots out. OK."

You've got that right. If you have the proper pump, and the chuck is working properly, then simply pushing the chuck on and flipping the lever should do it.

Normally, when you press the chuck on far enough a little button in the middle of the chuck will press the "thingy" down to let air out and let you read the pressure.

It may be that your chuck is poorly designed (or not really "stem agnostic") and you'd do better with a screw-on adapter. (And some chuck designs require changing out the innards to do Presta valves.)

(It really isn't that difficult and fussy with the right pump and the right technique.)

Inside the Presta pump head there will be a peg behind a rubber washer, which depresses the valve on the stem which is engaged when you move the lever into the elevated position. At the same time, typically a set of jaws will clamp onto the body of the stem holding it in place. It sounds very much as if your pump isn't able to activate the valve sufficiently to break the seal, and therefore when you pump, the air is backing up against the rubber washer rather than inflating the tyre.

As mentioned above, this could be an artifact of the exposed stem not being long enough and you should look to: use either a chuck which doesn't require as much stem to be exposed; to replace the inner tube with one with a longer valve; or use a valve extender (that leaves the existing core intact), or if the tube has a replaceable core to screw in a valve extender (like those available from Continental).

Sometimes, I find it useful when pumps aren't functioning as I'd expect them to, is to use an inner tube with a known working valve without it being installed in a tyre. This will remove the potential for insufficient stem being exposed to be a limiting factor and permit the pump to be exercised to ensure it is functioning correctly.

The pump appears to have a valve which is supposed to switch automatically between Presta and Schrader as needed. In my experience, these valve don't always work. I have a similar pump where the valve has become stuck, and I can only use it for inflating Schrader valves now.

If this is at the root of your problem as well, among many alternatives, you can 1) buy a new pump, or 2) get a Presta-->Schrader adapter.

My guess would be that if you operate the pump off the bicycle tire, air should come out the Schrader valve side. This will show you in which mode the valve is operating.

You need a special Presta valve suited to the tire pump or an adapter to convert your bike tire's valve temporarily to a Schrader tire valve, so you can use a standard tire pump. After filling, you remove the adapter till the next time.

One trick I have used in a pinch when my stem was too short for the rim depth (as your picture is showing) is to place my thumb against the tire at the point of the stem and carefully press in until the stem is being held out of the rim. This can give the leverage needed to attach the pump head to the short stem length. While the stem extender solution is a good one, your rims are not the super deep rims that require such a long stem that are not readily available. Go for a nice long stemmed tube and your particular issue should be solved. Also, I had trouble with unthreaded presta stems causing the pump head to slip off before the tire was fully inflated. I purchased a new pump head, and now it is difficult to remove the pump head on threaded stems, but the pump stays attached to the stem all the way to 120+ pounds on the unthreaded stems.

Had the same problem—the trick is that the threaded sleeve at the very tip of the valve needs to be unthreaded and floating free in order for the valve to work under the pressure of incoming pumped air. So the order of operation is:

I can't address the issue of the length of your valve stem, but I was lucky enough to have my bike shop include a pair of presta to schraeder adapters when I bought the bike. The bicycle shop showed me how to use the adapters and told me to leave them on the valve stems so that I would always have the adapters with me if I needed them. This has saved me several times when I didn't want to use a CO2 cylinder and was able to use the air machine at a gas station instead.

Not the answer you're looking for? Browse other questions tagged tire pump presta valves inflation or ask your own question.

2
How to fix this unusual looking valve stem to put air in the tire?

2
Cannot fit pump nozzle properly to the presta valve of my tyre
3
Presta valve top screw missing
3
Is pressure of presta valve hard to read by design?
3
Presta valve on new tube won't inflate
2
Presta valve inner tube issue: area around the valve does not fill up
0
How can I inflate a presta tyre with just one hand
1
I can't inflate tire. Should I look for another pump?
1
How to keep Presta valve insert from detaching after inflation?
2
Not able to inflate my bike tyre