What are good ways to dry shoes?

I ride through the winter in the Pacific North West and get soaked about every other ride.

What are the best way you've found to dry your shoes?

I've found that stuffing them with wadded up newspaper works well to draw the moisture out, but if I don't swap the paper out every couple of hours, I just get damp newspaper that smells of mildew.

An ideal solution would be passive - in that I would set the shoes up and then just grab the dry shoes a day later for my next ride.

From a theoretical point of view, there are some possible methods to take water out of a fabric object, such as a shoe:

The last two increase the rate of evaporation, the first by increasing the internal energy of water, the later by reducing the relative humidity of the air layer close to the fabric.

Then (always theoretically) one possible way to dry a shoe quickly would be to force-circulate warm, dry air inside a newspaper filled shoe that has been previously centrifugated/squeezed after being rinsed in warm water with a bit of alchohol.

The problem that still persists is how to actually implement this air heating and circulation without a complicated device or combination of devices...

I use to put newspaper inside as you described, but for the first three stuffings, I squeeze firmly (stepping over if necessary) so that most the moisture is mechanically removed. Then I put extra, dry newspaper and leave the shoes hanging in the open air. Unfortunately, depending on weather conditions, this not always work.

My solution is to wear cycling sandals (I use Shimano SD-66) in combination with neoprene shoe covers.

I find that I'm still toasty warm even when it's very wet and down to 0C/32F. Then when I finish the ride, I can hang up the shoe covers and let the shoes air out and everything generally gets pretty dry for the ride home.

Plus riding in sandals in summer is awesome!

There are a number of products that are referenced as "boot dryers" which would serve your purpose. They are commonly used for ski/snowboard boots but will dry any shoe out efficiently. Know that using these will stink up a whole room like a gym locker room, so use them with discretion in your home.

I have a Dry Guy Boot dryer which I put my shoes on after I get home to dry them out. The heat really isn't needed, just set the timer to air out my shoes and gloves. They also make a portable one that can be used with a 12-volt car power that works with just one pair of shoes at a time. This is also useful after a long ride where you've been sweating a lot to keep them dry and prevent them from smelling. I use this thing after every ride to keep my shoes fresh, I just set the timer appropriately depending on how moist the shoes are. 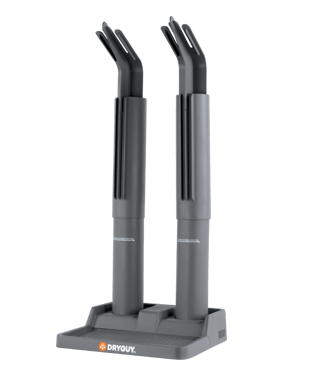 You can probably DIY something like this easily with a large computer case fan and some PVC pipe if you're so inclined, but you need to make sure it's designed so that the water doesn't drip directly on to the fan.

If you don't use a boot dryer, you can fill the shoe cavity with newspaper and that should suck out some of the moisture. You'll want to squeeze as much out as you can in to the first packing and then re-pack the shoes. You'll probably need to re-pack a few times over the course of a day to get them really dry. Placing them in front of a fan or by a heater will help speed up this process.

You should acquire a good dryer, the kind with the tray insert that you can set shoes on. Easiest way to dry your shoes every time.

You're in Corvallis though, so there's it's a safe bet for me to wonder if you're in a dorm or apartment that doesn't have a washer and dryer. In this case what I do is prop my wet shoes in front of a space heater ( obviously, making sure that they're not so close that they get too hot ).

When I ride into the office I use the hair driers in the changing room to kickstart the drying process and then, during the day, I leave them on a ventilation grid close to my desk.

I also use the wadded up newspaper method - but I find that the stream of (dry) air is more effective if available.

If I really had this problem a lot I'd consider buying a boot dryer. It blows air through the boot/shoe to dry it out, and can also be used to dry helmet and gloves.

I've found booties (shoe covers) to be pretty useless if you're cycling over 10 km. Rain will inevitably get in. I have a pair of SPD shoes with removable in-soles. SPD shoes generally have a plastic base which doesn't soak through like fabric materials. Since the insole can be taken out (when you arrive at your office in morning or wherever) the 'wet' parts of the shoe are separated so dry quicker. Wear a good thick pair of socks and pack another for your days work to put on when you arrive.

If you have a regular drier, tie the laces into knots, and close the drier on them to suspend them inside the drier. Turn the drier on high. This came from this post: http://kc-bike.blogspot.com/2008/09/tricks-of-trade-drying-your-grimy-shoes.html?m=1

Also, make sure you check the manual for your cleats. Some manufacturers will void your warranty if you expose your shoes to high heat.

Not the answer you're looking for? Browse other questions tagged maintenance winter shoes or ask your own question.

12
Shoes for oddly shaped feet
17
Can mountain biking shoes be used with road bikes? What are the pros and cons?
8
Are Merrell Barefoot shoes suitable for bike touring?
1
thin-soled cycle touring shoes
7
Are cycling shoes comfortable as everyday wear?
5
How to use a vapor barrier with cycling shoes for cold weather riding?
3
Waterproofing leather bike shoes