What would cause variable air resistance on a day with no wind?

I commute to work regularly. I find that on some days when there's no perceivable wind, I feel like there's almost no air resistance at all and it's so easy to ride at speed. It's also relatively quiet without the wind roaring in my ears.

On other days when there's no perceivable wind, it feels like I'm riding in soup. It's really hard to get any speed up and the air is quite noisy in my ears.

I've discussed with my co workers and they often say they have the same effect on the same days as I've observed. Although they're also travelling in the same direction as me, so I can't rule out a very slight headwind causing the perceived difference.

Are there any other explanations that would contribute? High humidity or a high pressure zones?

TLDR; assuming my calculations below are correct, there's roughly a 10% increase in air resistance between hot, humid days, and cool, dry days. Add in a slight but imperceptible tailwind or headwind, and it's conceivable that you could experience a 4–5mph difference in cruising speed between two days.

Air resistance is the primary force a cyclist must overcome at typical cruising speeds. According to one online calculator, assuming a typical road bike, a relaxed riding position, and a cruising speed of 18mph, 75% of a rider's power is used to overcome drag.

According to your profile, you live in Melbourne, AU, which is essentially at sea level. Using another online calculator, the air density when it's 50˚ and 0% humidity is 1.24kg/m³. When it's 90˚ and 100% humidity, the air density is 1.13kg/m³. So, on a cold and dry day, there's roughly a 10% increase in air resistance when compared to a hot and humid day.

According to the drag equation,

Assuming constant power output, and 75% of that power is dedicated to overcoming air resistance, you end up with roughly a 7% reduction (1 / 1.075) in overall speed. We started with a cruising speed of 18mph, so simplistically your speed on a cold and dry day would wind up being 93% of 18mph, or 16.75mph. I'd say that's enough to notice.

Of course, it seems unlikely that these two days would occur closely together. But if you're comparing a midday ride just before or after a storm to a late evening ride on a dry day a few days before and/or after, it's conceivable that you could wind up somewhere in the ballpark of a 1mph difference.

That said, even a small headwind and tailwind can make a significant difference in your speed. Sheldon's site has graphs showing wind tunnel tests. In particular, 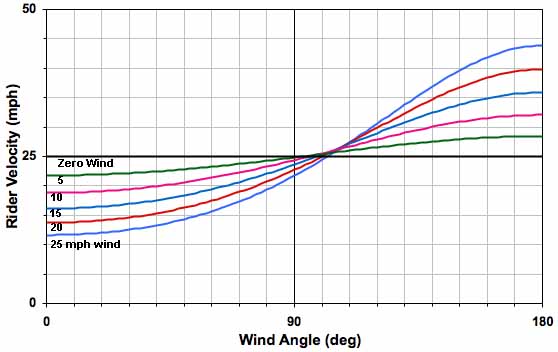 shows that as the wind angle changes from a headwind to a tailwind for a 5mph wind, a rider traveling at a "normalized" speed of 25mph (assuming no wind) would go from roughly 22mph to 28mph. The difference in rider velocity as wind velocity changes seems to be linear, so extrapolating backward, even something like a 2mph headwind vs. tailwind would cause something like a 3mph difference. That's definitely noticeable. Being in a wind tunnel, these tests weren't done with rolling resistance, so 25mph in the wind tunnel is probably equivalent to our earlier assumption of 18mph on outdoor roads.

On high humidity days, the air has less mass due to the more H2O, which is lighter than typical O2, CO2 and N2 weights. On high pressure days there is more mass for you to push aside. Air temperature also plays a part - hot air is less dense than cold air. Therefore a hot, low pressure, high humidity day requires less mass to be pushed aside.

These make a measurable difference to aircraft, however I have no idea if a cyclist travels fast enough for it to be measurable. I believe its more likely imperceptible wind and your own well being (or lack there of)

Though the physicists tell us we're full of it, many cyclists at least "perceive" that wind resistance is greater on relatively humid but cool mornings.

(And, of course, if you and your co-workers were out drinking together the night before, that could have something to do with it.)

This article on rolling resistance mentions as an aside:

(We later found that temperature greatly affects the rolling resistance of tires.)

If the change often occurs at the same time and in the same way as that described so thoroughly above, it could add up to something very noticeable.

Secondly, I would assume that a wet road would cause additional rolling resistance as the tire has to move aside or pick up a little water as it rolls. I can certainly detect additional road noise on wet, or even damp, days, so this energy must be coming from somewhere.

Not the answer you're looking for? Browse other questions tagged aerodynamics wind or ask your own question.

11
Is there a simple way to measure, record, and use wind resistance or tail winds?

28
Does drafting cause resistance to the lead rider?
11
What is the most efficient way to ride up or down hills, and into or away from wind?
11
Is there a simple way to measure, record, and use wind resistance or tail winds?
3
What speed of wind gust will cause a cyclist to swerve by 1m or more?