What is it called when you ride a bmx like a unicycle? 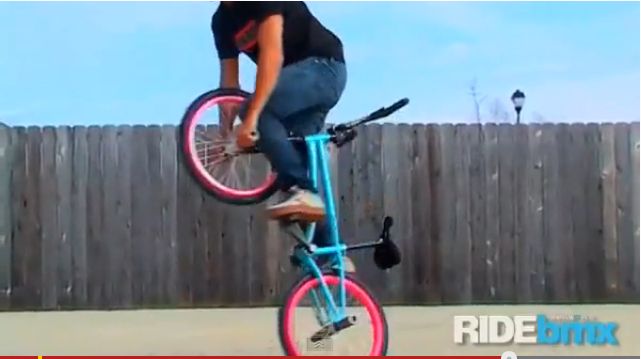 I was looking around a bit on YouTube and found a video for a footjam decade... which is pretty cool, in my opinion. However, in this video at 2:44 he rides the bike like a unicycle, straddling the head tube with feet on the pedals... which is freaking cool. What would that even be called?

According to this site on artisitic cycling they refer to a trick called a "head-tube wheelie" which is probably a good name for it. BMX enthusiasts may have a different name for it, but that's essentially what it is. I was also able to find this other site referring to headtube wheelies. Also, this Youtube video refers to it as a headtube seated wheelie, and headtube backwheel riding.

After some Googling with the help of @dotjoe's answer, I've found that this trick is referred to a "Pedalling Death Truck" or a "Blender". There's also a trick called the "forwards spinning deathtruck" which is pretty much the same thing except the rider faces the other way around (at least as I understand it).

The bmx name for the trick would probably be a pedaling death truck. A normal death truck is that same position, but with the feet on the back pegs. As you can imagine, that would leave you fairly stretched out and it'd be a nasty position to bail from.

Not the answer you're looking for? Browse other questions tagged bmx terminology tricks or ask your own question.