Is there such thing as a freewheel that doesn't click?

The clicking sound of the freewheel on my singlespeed when it's coasting is annoying for me, so I flipped over my back wheel and rode fixed for a few months in blissful silence. But having to pedal all the time even when going downhill, over bumps and around corners, was probably even more annoying - so today I am flipping it back again to the freewheel. Then I wondered, is there any such thing as a silent freewheel hub that I can buy? If so, what's the search term I'm looking for?

As already said, Shimano used to manufacture Silient Clutch rear hub. But that has been stopped a few years ago, so if you manage to source one - you are lucky man. 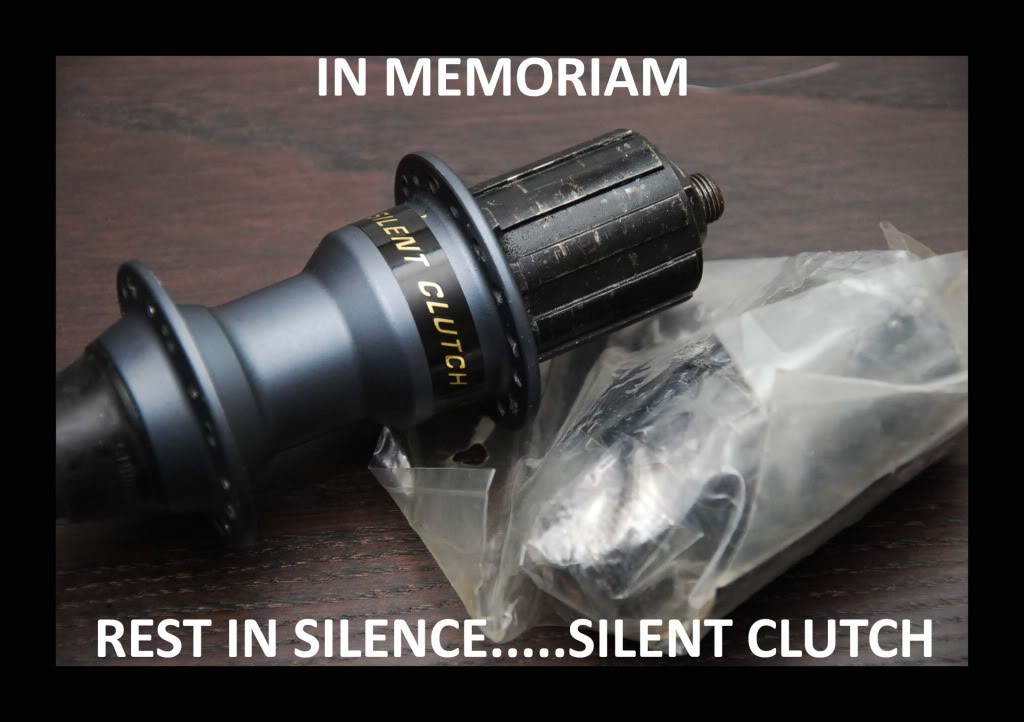 I used to have one of them and it was truly silent. It was heavier than standard shimano LX hub, but it was silent and with instant engagement.

I've heard about Stealth hubs - they are claimed to be silent, but I never had a chance to try them out.

You might as well read this thread about silent hubs for further information.

Police / Law Enforcement bikes often have a quiet freehub. This Cannondale Law Enforcement bicycle refers to it as a "Silent Clutch Rear Hub" and specifically mentions "R085" as a model number (further googling suggests it's a Shimano).

Single speed hubs with coaster brakes don't click, at least I have never seen one that clicks over here in Europe.

I don't know about other bikes, but in BMX there is a type of hub called a freecoaster - you can coast backwards and forwards without pedaling, and it is silent.

Apparently they have them for mountain bikes as well.

Bought a pair of wheels from Neuvation. I have to say, their hub is dead silent.

this is the only thing i've been able to find. been searching since new years 2013.

Check out the Stealth Hub from True Precision Components; as opposed to using pawls these hubs use a roller clutch. They are completely silent when the coast, the engagement is instantaneous and the cost is astronomical ;) I recently built myself a new rear wheel for my singlespeed mountain bike using one of these and really enjoy coasting in silence.

Although, now that I think about it, the bike is probably spaced at 120mm; it could be spread out to 130 to use a standard road hub, or axle spacers could be added to the BMX version.

As for silent clutch being dead, it would appear not as it's featured on Shimano's Disc version of the Nexus 3speed and I've found new wheels thru J+B imports that are build with silent clutch hubs.

I seem to remember a hub type that used ball-bearings in a tapered recess rather than pawls, as you pedalled the balls tightened (oh er) and on the overrun they release. This is of course silent. Or did I dream this?

Edit. I knew I was awake! It's called a slipper clutch.

Further Edit: The link above is for a specific implementation of a bearing clutch referred to as a slipper clutch. It is used with motorcycle clutches and used to prevent skipping/locking of the rear wheel when an aggressive downshift would result in too much engine braking - it basically de-clutches the engine when the plate holding the bearing clutch is over-driven, causing lateral movement and so forcing the bearings to press against the clutch mechanism.

In general ball (and roller) bearing clutches (free wheels) operate by having bearings sitting in a series of ramps on the inner driven race, and lightly sprung against the smooth outer race (which accepts the drive). As the inner race rotates forward, the bearing, which is already lightly pressed into the narrow face of the ramp and against the outer race, locks, and so engages the drive. When the wheel over-runs the pressure on the bearing is reduced as it is pushed out of the narrow channel, and so disengages the drive (as would back pedalling)

The main advantage of such a clutch is that it is silent as there is no ratcheting, and since there are no dogs, the effect is instant, with engagement at any position around the outer race. It should be noted that the greater the pressure from the drive, the greater the locking of the drive and driven races. Dirt can cause these devices to lock and so become a fixed hub!

Short answer is get used to it. The clicking of freehubs/freewheels is like a fine wine- it's an acquired taste.

That said, the drier the hub is of lubricant, the louder it will become. You can squirt some grease in there to quieten the freewheel down if it's getting dry. The heavier the grease, the quieter it will make the clicking. Some freehubs actually require a very light grease due to the low spring tension acting against the pawls; too heavy of a grease will actually stop them from catching when you pedal forward. However, I'm not aware of a freewheel with this problem.

I'm sure some brands of freewheels are quieter than others, but I can't make any suggestions for you in that department.

Finally, it's important to note that freehubs and freewheels are two different creatures, which is why I edited your original question slightly. Explaining the differences is a fairly easy but different conversation.

i have 2 sets of stealth hubs they are silent compared to chris kings.

Then I wondered, is there any such thing as a silent freewheel hub that I can buy?

"Silent" can mean something that gives absolutely no sound at all.

"Silent" can also mean something where the sound level is so low that it doesn't annoy.

If so, what's the search term I'm looking for?

For the second definition of "silent" (sound level low), the search term is "Shimano". I have found that every Shimano freehub makes a very minimal sound. It is audible but never annoys me like freehubs from manufacturers like Formula annoy me a lot because they sound like machine guns.

Unfortunately, I don't think Shimano makes single speed freewheels. With suitable spacers, perhaps a freehub could be made into single speed but then you need frame spacing for multi-speed clusters.

Not the answer you're looking for? Browse other questions tagged hub freewheel mechanical or ask your own question.

2
What road hub makes the least amount of noise

1
Can I use an "8 speed compatible" crank such as Shimano FC-2303 with a 7 speed Shimano MF-HG37 freewheel?
1
Is there a tool (or preferred method) for removing the snapring that holds the cog on a coaster brake hub?
6
How many freewheel thread sizes are there?
2
What wheels can I buy that fit this Shimano UG 5 speed freewheel?
1
What's that thing at the bottom of the fork steerer?
2
Is there such a thing as 'eBike specific' freewheel?
0
My rear wheel is wobbling much after around 3 months of use. Is there any fix that i could do it or should i replace the wheel?