Why do current, entry-level shimano rear derailers have large-diameter pulleys?

I have seen (and recently bought) entry-level rear derailers from Shimano (Tourney for MTB, 2300 for road bike), and I keep wondering why they are making these parts with such large pulleys.

I don't think this make the parts cheaper to produce, since large size means more material, and I can't see why customers would find this more attractive or adequate than the smaller-sized ones (unless customers would prefer more expensive models because they DON'T HAVE large pulleys...).

Also, I imagine there might be advantages to larger pulleys (less chain link rotation, less wear, slower pulley rotation), but the reason why entry-levels are big, while more expensive models continue to be the same old size, is very unclear to me, not to say arbitrary.

There are 2 versions of derailleurs which come with extra large pulleys.

As seen in the image below, there is a large tooth count difference between the second to largest cog and the largest cog. 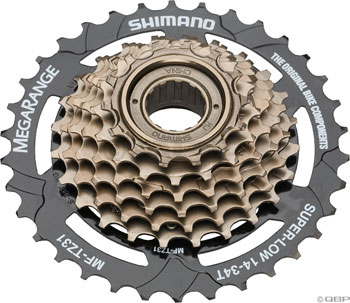 This large difference in size requires a large derailleur pulley, to make sure that the chain has cleared the teeth on the last cog, in order to shift into this gear.

If you use a smaller pulley on the derailleur, you may be able to get it to shift, but it will be clunky and loud at best. At worst, it will trap the chain against the side of the largest cog, and refuse to shift into that gear at all.

The second type of large pulley derailleur is decidedly not low end. 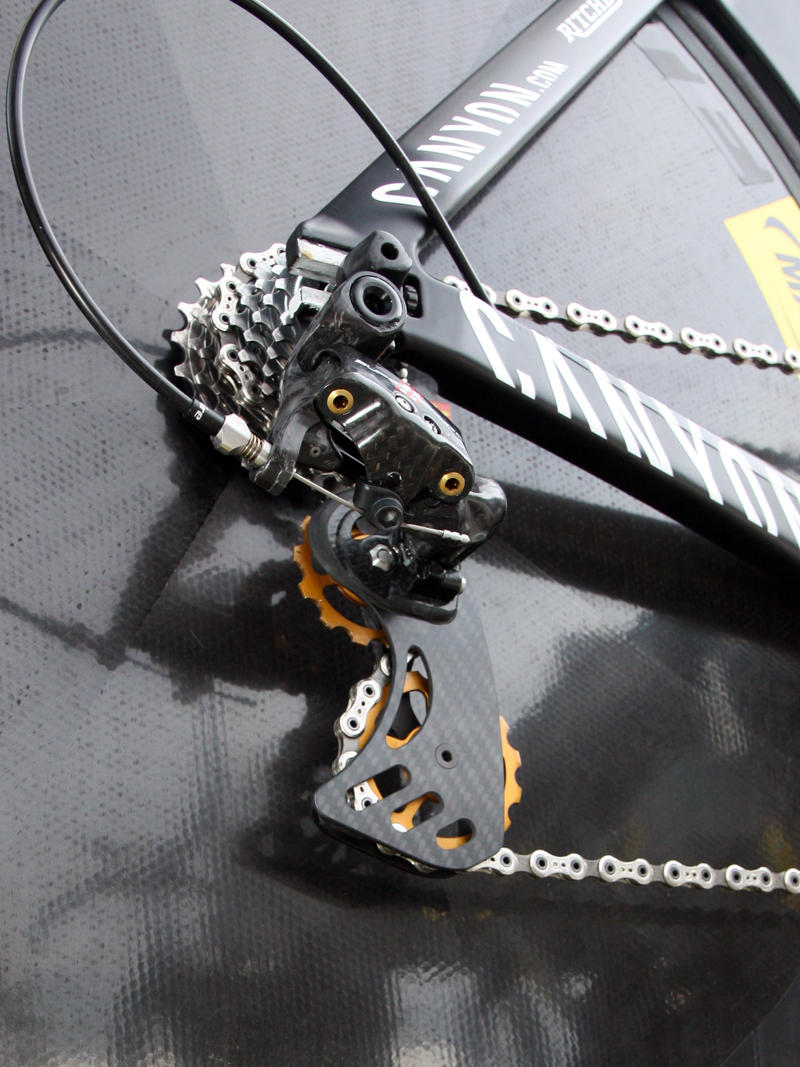 The Berner Carbon Fiber derailleur upgrades are designed to reduce resistance on the drive-train by decreasing the severe chain bends associated with smaller cogs. While expensive, my experience has been an average 10 watt reduction in energy used by the cyclist, with no apparent loss of efficiency in shifting, or in anything else other than the cyclist's wallet.

The main reason for the larger pulleys is that you don't need to make them as strong. More teeth helps to spread the load.

A small pulley is lighter and can aid shifting, but needs to be made from stronger material so you don't shear/wear teeth as much, and so you don't wear the bushings as fast (as @alex commented)

Low end drive-trains tend to have a bigger range from smallest gear to largest. Meaning the biggest cog in the cog set on the rear wheel tends to be much bigger. that means there is extra chain length needed to cover all the possible cog/chain ring combinations. (aka the gear you are in) The larger pulley wheels take up extra chain length when not needed.

Low end bikes are often sold to people that are not conditioned athletes. They need very low gears for easy pedalling especially going up hills. The large Cogs provide those low gears. High end bikes are targetted for good athletes that normally would not need those very low gears. Because the low end bikes must cover a large range of sprocket sizes the derailleur cannot be of the small, "short arm" variety.

Not the answer you're looking for? Browse other questions tagged derailleur mechanical design or ask your own question.

3
Why did Shimano eliminate the B tension spring on the latest rear derailleurs?