Are aerodynamic rims worth additional weight?

I was under the impression that reducing the weight of your wheels is important. However, I'm noticing that many of the extremely high-end aerodynamic rims are actually heavier than cheaper rims by the same manufacturer.

Obviously the prices seem to support the idea that aerodynamics matter more than a few hundred grams of weight, but at what point does the added weight offset the gain? Or is the importance of reducing rotational weight overstated?

Obviously the prices seem to support the idea that aerodynamics matter more than a few hundred grams of weight, but at what point does the added weight offset the gain?

An exact calculation will depend on the total mass of you and your bike, your speed, the wind, its angle, whether you're climbing, on the flat, or descending, and the speed you're going (or the power you're putting out). However, we can make ballpark estimates of many of those variables to get an approximate answer.

Let's say the aero wheels add 100 grams of total mass compared to the "stock" wheels, and in return reduce your drag area, CdA, by .005 m^2. That's a ballpark improvement for a reasonably aero wheel compared to a standard box rim, though for extremely well-designed wheels you can see perhaps double that difference (~ .01 m^2) or more, especially at high yaw angles.

The power equation for a bicycle is well-understood and was given in this Bicycles Stackexchange answer. Thus to determine the point at which it is preferable to trade off lower weight for aerodynamic drag, we can substitute suitable values for mass, speed, slope, and so on, and plot the power savings, as is done here. 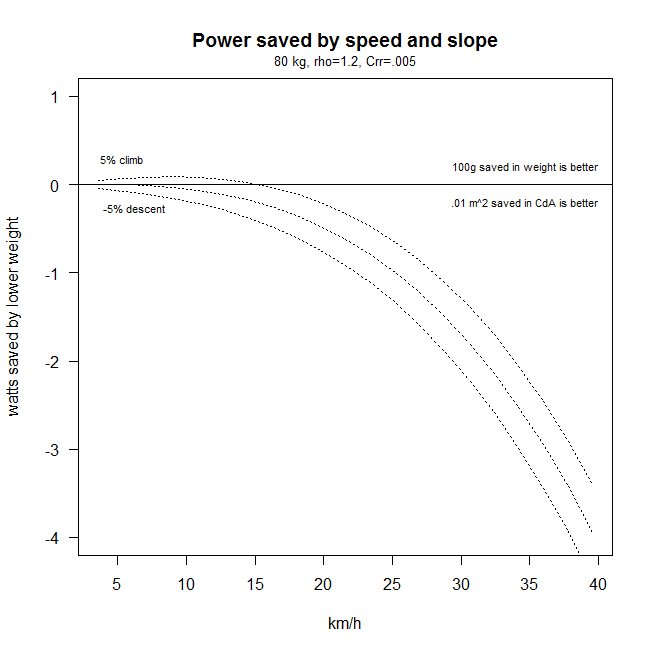 As you can see, only for steep climbs at low speed is it preferable to have lighter wheels; however, for this particular comparison of weight savings and aero drag savings, the benefit is small, less than a watt. As speed increases, the dotted line eventually dips below zero and it becomes better to opt for the aero savings.

That was for a steep hill. On the flat and for descents, you will almost always be better off with the more aero wheels.

Note that the savings in power is still relatively modest. When racing, even small benefits can accrue to determine victory or loss, but for normal recreational riding you may want to keep the magnitude of lighter wheels vs more aero wheels in mind, especially if your budget is limited. Only you can decide whether the relative benefit is cost effective.

Thought I might add some extra comments to those very good and comprehensive examples of the aero v weight scenarios that Robert provided last year.

In particular the dynamic scenario of accelerations on flat terrain, which is a little more complex than steady state cycling.

Some might think light wheels would accelerate better than heavier aero wheels, but it's not necessarily the case. Indeed it's more likely the opposite is true, since once you are travelling at speed, the energy demand is dominated by two factors; changes in kinetic energy (including rotational) and overcoming substantial and ever increasing air drag.

If you reduce the energy demand for overcoming air drag, then the energy required for that can instead be used to increase kinetic energy.

Whether or not that results in a performance gain comes down to the starting speed, how long the acceleration lasts for, as well as the magnitude of the aerodynamic and mass differences.

I go through this issue in some detail in this blog post I did last year:

In that item I compare 10-second long accelerations from zero speed and from a starting speed of 30km/h. In the examples I used a typical aerodynamic difference I have measured between such wheels, and an exaggerated difference in wheel mass of 0.5 kg.

Results are plotted on charts.

Turns out that if you are starting the sprint rolling from speed (in this case 30km/h), the heavier aero wheel rider edges ahead immediately and their lead continues to grow. The heavier aero wheel is always the better choice in that scenario (notwithstanding the myriad of other wheel choice factors - which I outline the in the linked post): 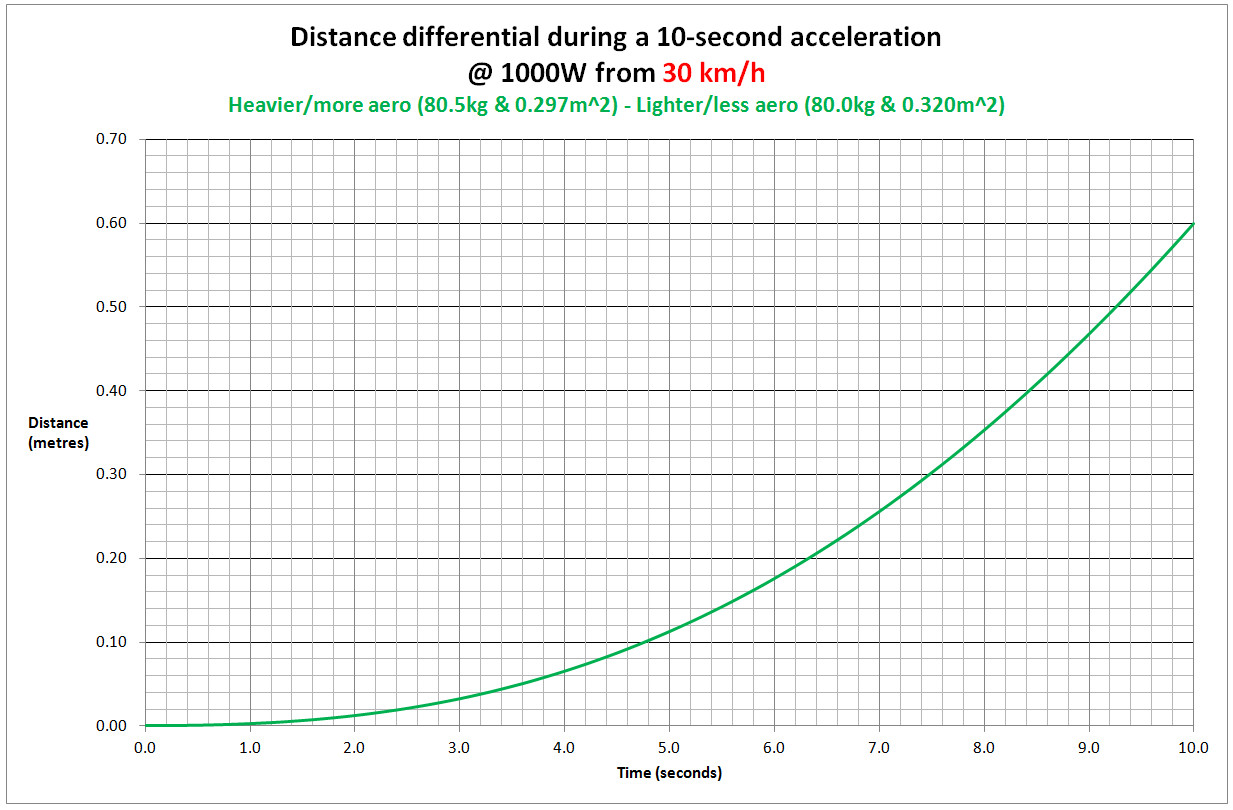 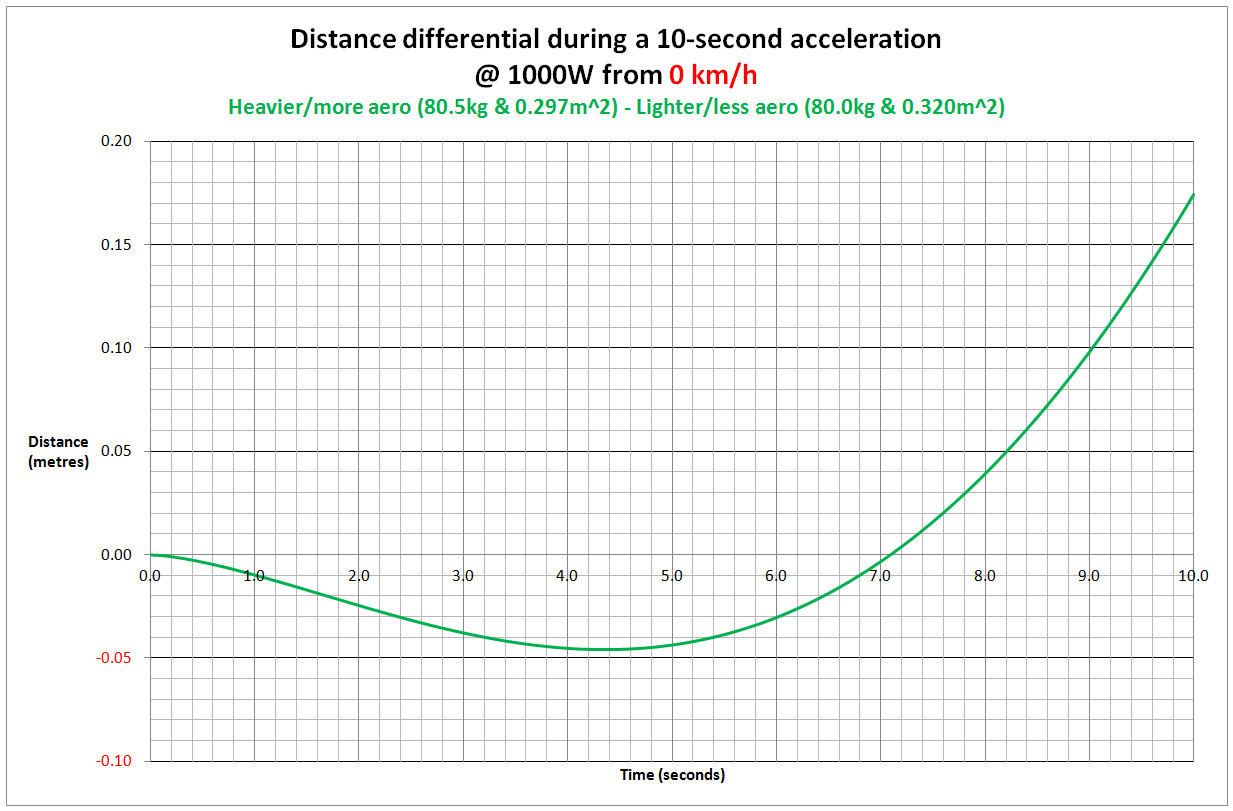 So a hot dog crit with the near dead stop turns presents an interesting dilemma, and perhaps could benefit from more individualised assessment. Else if the racing never really slows down all that much for corners, then an aero wheelset is almost always going to be faster and/or require less energy, and accelerate faster.

Of course the exact scenario for any individual depends on the shape of their sprint power vs time plot as some riders have a higher peak power, some riders experience a more rapid power fades, and so on.

The principles however don't change, as the nature and overall shape of the plots will be similar since the energy supply is fixed and it goes to overcoming the total of each energy demand factor, i.e kinetic energy changes, overcoming air drag, rolling resistance, potential energy changes (gravity), drivetrain friction. Require less energy for one, and more is available for the others.

In that item I also cover the impact of differences in rotational wheel mass / moment of inertia, which turns out to be such a small factor it's almost negligible.

I think it depends on the course you're riding. Professionals will have multiple wheelsets and use different wheels depending on the course they are riding for the day. Weight really only makes a big difference if you are climbing or accelerating. So for a course with a lot of climibing, where aerodynamic drag is at a minimum anyway, they will often choose a very light wheelset without aerodynamic rims. While on flat courses and time trials where aerodynamics give a bigger advantage they will go with the slightly heavier aerodynamic wheels.

I recently did some extra analysis on the modelling referred to in my previous answer, this time using a realistic power output curve for accelerations from a standing start and from two rolling start scenarios, instead of the assumed flat 1000W used in the earlier model.

But in short, the conclusions are the same, just a minor differences in exact timing of when aero become more advantageous in a standing start. If already rolling on flat terrain, it's always better choice, and I added a third scenario, an acceleration up a hill from a low start speed (think of a criterium U-turn at bottom of hill). In that case the aero wheel still wins, unless the finish line is close to the turn.

Note that the savings in power is still relatively modest. When racing, even small benefits can accrue to determine victory or loss, but for normal recreational riding you may want to keep the magnitude of lighter wheels vs more aero wheels in mind, especially if your budget is limited. Only you can decide whether the relative benefit is cost effective.

Not the answer you're looking for? Browse other questions tagged wheels weight aerodynamics or ask your own question.

19
How can one estimate drag for a bicycle?
16
Why are wheels so important for racing?
17
What is the effect of adding weight to a wheel vs adding it to the frame?
4
Climbing or aero bike for a light rider?
4
Will I notice the benefits of changing wheels?

5
Are double walled rims worth the money?
1
Advice on aero wheels
6
Why are roadies concerned about weight?
2
Weight of wheels vs. weight of tyres
6
What is the average CdA to Weight relationship of a professional Road cyclist?
6
Are 23mm tires on a 25mm rim (21 mm internal width) safe?
4
My rim exploded inflating on an automatic pump of a gas station. Should I reuse wheel's spokes/hub or buy everything new?
4
How much aerodynamic drag does each component contribute?
20
I have a 2nd broken spoke after 300km on a new bike, is it the wheel or me?