How hard is a category 2 climb?

I am moving to Ojen Spain for work for 3 months and will be biking to marbella and back.

I have put the ride into mapmyride.com and it says that the ride is a cat 2.

I am not a stranger to road bikes, I worked as a messenger when I was a kid and used a bike for commuting just about everywhere I have ever lived. I started riding again about a month ago on a stationary going as hard as the thing will let me for an hour at a time to at least try to acclimate my legs a bit again. (can't ride in Dubai really, you will end up as a hood ornament)

I am asking because it is sight unseen and I haven't ridden in probably 5 years.

For someone who hasn't been riding much, this climb will be brutal. But you'll be surprised at how quickly you'll make progress. Even though you might fail the first time you go up, this ride seems like a great challenge.

Last year I coaxed a friend to start riding again. After a half dozen easier rides, we attempted a mountain climb similar to the ride you're describing. On his first attempt, he only made it about a mile up. On his second attempt, he made it to the top, and on the third attempt, he made it up without weaving all over the road. When you think about it, it's amazing how quickly you can rise to the challenge.

It's probably impossible to adequately prepare on a stationary bike because the feeling of a real climb is different. It will definitely help if your aerobic fitness is already pretty good, but a stationary bike can't really prepare you for the feeling that you're about to start rolling backwards even though you're pushing as hard as you can. :)

By the way, the gearing on your bike will make a big difference. If you can find a bike with a "compact double" or triple crankset, then you'll have an easier low gear available to you, which will make for a more enjoyable ride. A low gear will let you pedal at a faster rate which will avoid wearing out your knees or leg muscles.

The difficulty of any climb will depend on its length, steepness, wind speed and wind direction, the total weight of you and your bike, and, of course, your fitness and your intended speed.

Stephen Touset has thoughtfully provided a link that shows the elevation profile for the climb. The grade appears to be relatively even rather than a series of steeper and flatter "stair steps" so with a few other assumptions we can put some bounds on how much power you would need to produce to climb from Marbella to Ojen at different speeds.

Using assumptions about rolling resistance, aerodynamic drag area, air density, and weight that are in the "normal" range, we can therefore make a ballpark estimate the total power needed. The estimate won't be exact but it should give you an idea of the power required. Further, I have divided total power by an estimated body weight to get "watts/kg" which is a standard way to describe an athlete's power production. Tour de France riders can maintain 6.0 watts/kg for a considerable length of time, a domestic pro racer may average 5.0 watts/kg, a very fit recreational racer may average 4 watts/kg, and a commuter riding home after a long day's work might be able to maintain 1.5 - 2.0 watts/kg. Finally, I have converted speed into the number of minutes needed to travel 5.9 miles while climbing a steady 4.8% slope. The plot below summarizes this information, with the x-axis showing the number of minutes and the y-axis showing the output in watts standardized by body mass in kg. If you can average 4 watts/kg, it will take around 25 minutes for the climb. If you average 1.5 watts/kg, it will take about an hour. 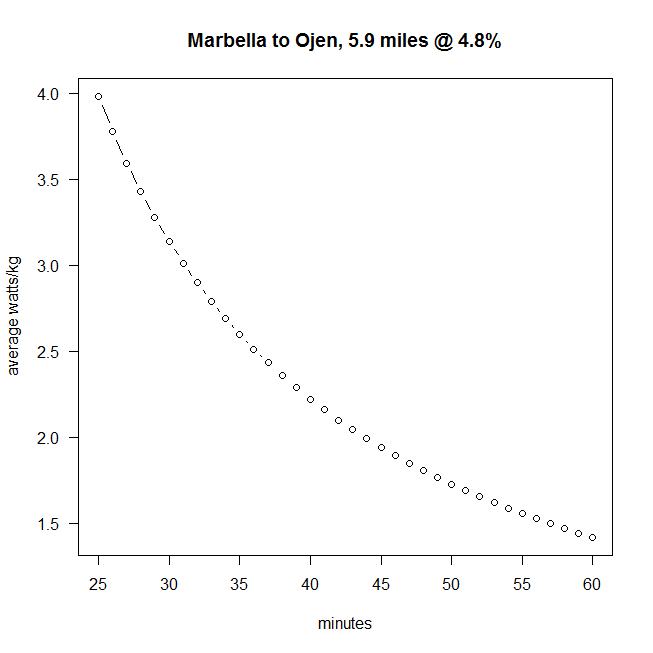 As an aside, this bicycles stackexchange post shows examples of Category 2 climbs from recent Tours de France. 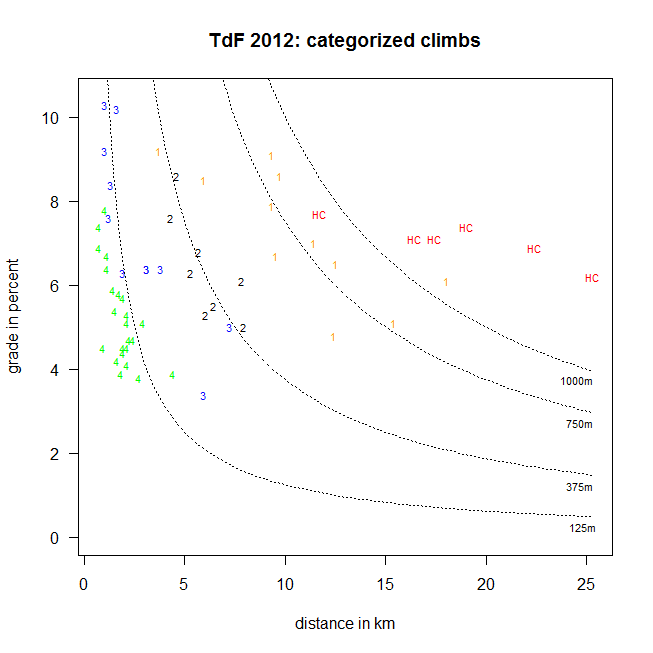 Taking into account the strava ladder, with kom in 20 minutes, and experience on similar length and average gradient climbs, my girlfriend, who is an occasional rider, (less than 1.000 km a year) does approximately double time than the kom, and stops around 3 times in the side of the road.

New roads in Spain do not usually have veeeery steep sections (10 +) but older roads do.

For someone who hasn't biked a lot, this will be Really Flaming Hard. On the other hand, its Really Good Exercise too.

My nearest local segment is 447 metres high, and 7.5 km long, so about 90% of yours. This takes me 35 minutes non-stop now, but the first time a year ago was closer to 90 minutes with five rest stops of 8-10 minutes. I'm a dripping mess by the end. You'll need a shower at the end, and time to calm down.

Plus the temperature in a more equatorial region is likely to be higher. Stay hydrated - I imagine a 2 litre hydration pack would be good, or at least two 750 ml bottles/bidons.

There's a road to the east which climbs the same distance over 15 km, but breaks it up into two steeper climbs, with a 100 metre downhill in the middle for recovery. This might work out better than a long 10 km grind. The road doesn't have a name, but it goes past the Municipal Cemetery of Ojén.

Finally - you posted this question two years ago. Are you able to tell us how it went, and how you found the ride? Future internet searchers will thank you.

52
How are the categories for climbs decided?
21
How can one estimate drag for a bicycle?

52
How are the categories for climbs decided?
23
How should I approach hills?
11
What's the lowest safe cadence on a climb?
5
Uphill riding hard for me
9
Low heart rate on climb
12
Should I climb out of the saddle?