What does "claiming the lane" mean?

If one is "claiming the lane" does that mean:

b) they are riding in the middle of the lane, with someone else side by side, or some other way that they take over most of the lane width? or

b) is most correct, except that you don't need anyone else by your side.

Taking the lane is riding pretty much right in the middle of the lane, and asserting control of the entire lane. Riding in the middle makes it obvious to motorists that they'll have to change lanes, or wait for a safe opportunity, in order to pass you.

Yep, I'll agree. To "claim your lane" you ride roughly in the middle of the lane, though precisely where depends on the situation.

Eg, if you're in a right-hand turn lane, "claiming your lane" is best accomplished by riding near the left-hand edge of the lane. And vice-versa when in a left-hand turn lane. The idea is to not give the motorist any impression that you are intending to share the lane with an automobile.

Of course, there are many more times when it's safe to "share" the lane to a degree, such that the motorist does not need to completely change lanes to pass you. This is the polite thing to do when conditions permit.

It requires some judgment.

There are two cycling positions - primary position ("taking the lane") and secondary position. These positions are relative to the moving traffic lane:

a moving traffic lane - that part of the carriageway along which through traffic is moving at the present time. It is a dynamic concept, changing continually with place and traffic conditions. A moving traffic lane meanders past parked vehicles and other obstructions, and does not necessarily coincide with any markings on the surface.

The primary position ("taking the lane") is in the centre of the moving traffic lane (the blue arrow in the picture below). 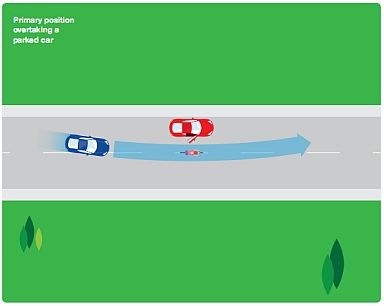 Adopting the primary position makes it easier for drivers to see you and also prevents drivers from overtaking you. It should be your normal riding position.

The secondary position is about 1 metre to the left (right in the US, etc) of the moving traffic lane but no closer than 0.5 metres to the edge of the road. The secondary position should be used when it will help others without impairing your own safety (e.g. wide roads where it is safe for drivers behind to overtake you).

Not the answer you're looking for? Browse other questions tagged traffic terminology or ask your own question.

14
Is it good practice to wave following cars through when safe?
12
How can I prevent cars from passing me too closely?
0
I generally commute along four-lane 30 mph [50 km/h] main streets. Is this wise?

23
Passing cars on the right, and later merging into their lane
22
Do cyclists warrant special consideration under traffic laws?
7
What does the term pannier really mean? Does how the bag is hung matter?
3
Using the outer lane of an inner-city one way system - where do I ride?
10
How do you ride on a road that doesn't have a bicycle lane?
6
If a lane is going to expand should the left lane be taken prior to the expansion?
9
Which traffic light do I have to follow?
4
bike lane interuptions