What is the reason for starting before the traffic light turns green?

I've noticed that a lot of commuters come to a complete stop at traffic lights but go before the light turns green. They start riding as soon as the light in the intersecting direction turns red. I usually get annoyed and assume that this could only reinforce negative opinions held by motorists, but I've suspected that there must be some valid reason for the early start.

This is a separate issue from taking an Idaho stop at a quiet intersection or blatantly running a red light. For rolling stops and blatant running, there is a significant saving in effort from not completely stopping, and there is an understandable, if not necessarily justifiable, tradeoff between efficiency and legality.

There doesn't seem to be the same tradeoff for early starts at traffic lights. In this case, the saved time is only two seconds, and there is no saved effort (since they have already come to a complete stop).

I've seen enough people do this that I'm sure there must be some logic behind the early start. Are commuters really desperate to save two seconds, or is there (as I suspect) some deeper reason for taking an early start at traffic lights? Does this behavior just hurt relations with motorists, or are there safety benefits that make this something that should be pushed for legalization (as with Idaho stops)?

The UK and many places in Europe have Advanced Stop Lines (Highway Code rule 178) at traffic lights: 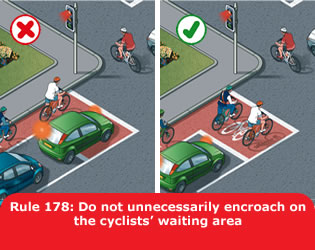 These allow cyclists to get ahead of motorists without jumping the red light.

For junctions without an Advanced Stop Line you'd have to weigh any benefits of clearing the junction against the potential legal consequences, the likelihood of increased driver hostility and the risk of colliding with a vehicle jumping the lights from another direction.

Personally, I don't jump red lights. On the roads I cycle on I think it would be more dangerous than waiting for them to change.

There is the practical reason that for the first 2-3 seconds of riding the bike is generally unstable, and the ability to hold a steady course is limited. Trying to get the bike moving while cars are whizzing past within inches is definitely unnerving and possibly risky. (And cars will tend to pass closer to a standing bike than a moving one.)

Basically for the same reasons that advanced stop lines exist - puts the bike where it can be seen by drivers setting off, rather than risk being sideswiped in a blind spot. http://en.wikipedia.org/wiki/Advanced_stop_line#Safety_aspects

I agree with k102 in response above. I commute to work everyday on a two-lane county road. I try to make myself as visible to motorists as possible. At stop lights, I coast in front of the line of cars (maybe 5 feet if there is room.

Taking off at the other directions red light gives me time to get my momentum up and hopefully a chance for the motorists to see me and possibly think to themselves 'hey this guy has no bike lane and I am speeding within a couple feet of him.'

By doing this, I've thought to myself, hey I'm running a red light, but safety is my number one priority.

Further to Tom77, many of the junctions round here don't have a (usable*) advance stop area, and have pretty poor road surfaces in the junction itself. Getting an early start (by which I mean using eyes and ears and going only when I personally feel it is safe) gives you time to clear the potholes in the junction - by going round them. Starting on green (even with an advance stop box) can mean you're forced through the guts of the hole. I say this as someone who doesn't run red lights - I don't feel I have time to make a good judgement in that case - but sneaking them is a different matter, IMO it's often safer, and lets the cars get away quicker as well.

*The stop box may be unreachable due to a bike lane that's always full of wing mirrors because it and the whole road are too narrow, or may always be full of cars so you can't even stick out of the front of it

" sure there must be some logic behind the early"

I have seen enough of the behavior of motorists and cyclists to know this is the fundamental flaw causing you confusion. Where does it say you have to be logical to ride a bike?

or is there (as I suspect) some deeper reason for....

Almost certainly no rational one. Most people who willingly break laws will claim a deep and meaningful reason why they believe they are above the law, and why "It won't happen to me" applies more to them than other people.

Does this behavior just hurt relations with motorists, or are there safety benefits that make this something that should be pushed for legalization

I definitely does hurt relations, however legalizing it will make limited difference. Legalizing it would be equivalent to the euthanasia debate, however Darwinism theory lends some support to the idea of legalizing it for those who have not yet procreated.

The "claim of right" (a legal defense in some countries where you can do illegal stuff if you truly believe it is for a greater good), is probably around it is safer for the cyclist to clear the intersection ahead of the cars and allows the traffic freer flow etc - something that is supported in some jurisdictions by special lights and road rules. It sort of fails when you consider the safety issue of what happens when a cyclist is T-boned by a couple of tons of steel racing to (illegally, but the result is the same so its irrelevant) clear an intersection.

Not the answer you're looking for? Browse other questions tagged commuter advocacy or ask your own question.

24
Passing cars on the right, and later merging into their lane
8
How can I avoid crashes on my urban commute? Tramlines and CBD sections especially
4
What electric bikes are for sale in the US, and how good are they?
30
What is the hand gesture for "I'm sorry"?
5
What's the proper technique for starting uphill?