How close do I have to be for effective drafting (while commuting)?

I commute and want to draft another bike, but still have room to stop when someone opens a car door in front of the rider in front of me. At what distance does drafting significantly reduce drag? Are there factors other than following distance that influence drafting efficacy (wind direction, etc)?

This is not a question about whether the drafting while riding through urban environments is a good or bad idea. I know that it is probably a bad idea.

I don't believe you can effectively draft and have enough time to stop. I don't know the exact aerodynamics (and I suspect it's affected by speed and wind), but if you watch any paceline or peleton, they're never more than a couple feet (about half a meter) behind the rider in front, often only a few inches (centimeters) behind. With a crosswind or larger groupings, they're even likely to have wheel overlap (where the front part of the front wheel of the following cyclist is next to the rear part of the rear wheel of the lead cyclist).

You can really only draft safely with the cooperation of the lead cyclist, who needs to signal back to you before starting to stop.

Let's put it another way:

Less than a sixth of a second to figure out that the lead bike is braking and to start braking, and that's assuming your brakes are as good or better than the lead bike's brakes. If the lead bike has slightly better brakes (or wider tires, or grippier tires, or even just pulls the brake levers a bit harder than you do), you may simply have no reaction time available and a collision will be unavoidable.

In other words: you definitely can only safely draft with the full cooperation of an experienced lead cyclist who won't brake unless they've warned you or being rear-ended by you is better than whatever they're about to run into. If you were going to go by hazards, they'd need to warn you about upcoming hazards and you'd need to pull back to 10 feet (3 meters) or more.

Additionally, you should simply stay entirely out of the door zone so that opening car doors aren't much of an issue. It's not unheard of for car doors to open very fast with no warning, so that nobody has enough time to avoid hitting the suddenly opened car door. I haven't checked the laws of every single state in the US (and definitely not outside the US), but in general the area that parked car doors can open into (the door zone) constitutes a hazard that you're not required to ride through. When a bike lane is in the door zone I'll either ride the line on the left of the lane (if that's outside the door zone), or simply ride in the right wheel track of the car lane next to the bike lane.

Depends on the size of the thing you are trying to draft.

The distances listed below are distance between objects at normal road biking speeds. Bigger distance for higher speeds. I may (or may not have) drafted a lot of things when I was younger and dumber. This is what has been observed.

The rudimentary calculations that others have done here are all conservative because the object you are drafting is also moving and cannot instantaneously stop, they also have to decelerate. In the case of an 18 wheeler or a bus their deceleration is likely to be slower than the cyclist. In order to truly calculate the time you have to react you would need to know the speed of both objects and the deceleration that each can achieve.

Nevertheless at these distances it is EXTREAMLY DANGEROUS to draft anything that doesn't know you are there. You will not be able to react to a rock, stick, crack in the road, or pothole, and any of these common occurrences will likely end you.

According to this research quoted by Cycling Weekly you get pretty good drafting effects at 5 metres, as does the person you are sitting behind. And you still get a significant drafting effect up to 20 metres. 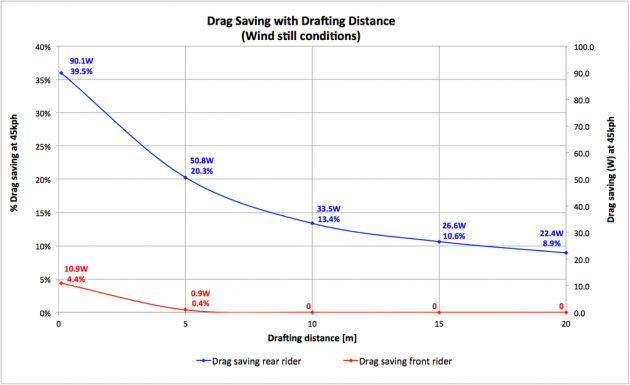 First, at around 10-12 MPH and below you are fighting rolling/frictional resistance enough that the drafting benefit is negligible in still air. If the you have a headwind of 10+ MPH or are traveling at 15+ MPH then there is some benefit to be had.

Assuming that there is no wind or a direct on head wind, the extension of the 'drafting bubble' is about 5 - 6 feet beyond the front rider. Any further back than that and neither rider experiences any benefit. Obviously the closer you get the better, but that requires the lead riders cooperation and that the two of you communicate.

Since wind is rarely straight on, many times you will be drafting slightly to one side or the other. The impact again is a little less, but you may be safer, as long as you are careful not to overlap wheels.

To answer this part of your question specifically:

At what distance does drafting significantly reduce drag?

I think a well accepted rule of thumb is that riding right on someone's wheel (within a couple feet) can save you about 40% drag. It depends on your speed, wind speed, wind direction, how aero the cyclist ahead of you is, etc.

I compete in triathlon, where there is (usually) a "no-draft" zone of 7 meters behind the cyclist in front of you. You can sit 7 meters behind (about 3 bike lengths from their back wheel) and still get a non-trivial draft. I think it can be about 10% depending on wind direction, speed, how aero the guy you're drafting is. The folks at Specialized measured this in their wind tunnel and said it could be as much as 20%. 10-20% may not be noticable to many people, but if you're in an Ironman race going 112 miles on the bike, I'll take a 10% energy savings any day, even if I don't feel it. On the other hand 10-20% may not be enough of a savings for you to risk getting in an accident on your daily commute.

Drafting is very well possible depending on the environment. In The Netherlands it is not untypical to have significant parts of your commute on stretches of cycle paths that are straight, free from car dooring risks and without side roads (or at least ones over which you have priority).

I find that at speeds of 25 km/h and above, when you stay less than 1 meter away from the draftee, there is a significant benefit. On the other hand, by riding slightly staggered behind the other person, you can watch the road ahead and anticipate any abrupt maneuvers.

One wheel-length behind is what you're taught when learning to paceline.

And it is definitely a bad idea. If I caught someone doing that to me I would intentionally slam my brakes - I can easily correct from a rear wheel losing traction, but you would go down.

I didn't think it needs to be said, but I would not intentionally harm someone on the road.

Not the answer you're looking for? Browse other questions tagged safety commuter skills drafting or ask your own question.

214
Terminology index - a list of bike part names and cycling concepts
46
Is it considered rude to draft other random cyclists?

13
How many effective gears do I have on a 21 speed bike?
11
How fast do you need to be going to get an effective slipstream on a bike?
15
Sunglasses for commuting?
14
How to nonverbaly signal a drafting proposition to fellow cyclist?
3
How to convert a commuter CX bike to an Electric bike?
58
How to prevent drafting?
12
How close to the kerb should I cycle?
6
Shoes for commuting
1
How close do riders follow their wheel/attack