What's wrong with my rear wheel? Wheel moves about 1/4" front to back when brake is fully applied, cassette seems a bit wobbly, some rubbing noise

I first started inspecting my wheel because I noticed when I applied my brake while not riding, I could push my rear end and the wheel would turn forward and back about 1/4"-1/2" each way (but the brake is still locked tight) . I took my wheel off and saw that my DT Swiss center lock was loose, so I bought a Park BB tool and tightened it up, but I still have the problem but less now. I see that the wheel is moving @ the center lock just a bit.

Then as I was messing around with the bike upside down, I noticed that my cassette is wobbling ever so slightly.. Is it possible/probable that this is related? There is also some rubbing noise that is not coming from the brake that is difficult to locate.

Is this likely my axle? Hub? Cassette? Thanks!!

I've seen this issue in the past and the culprit was the axle (not the skewer) in the hub had snapped.

Due to the age of the wheel (15-20 years), it was more economically viable to replace the wheel than to rebuild the old wheel with a new hub.

I'm not 100% certain how the DT Swiss centerlock works but it seems like its a way to attach a 6 bolt brake rotor to their hub. What may have happened is that since your center lock was lose: 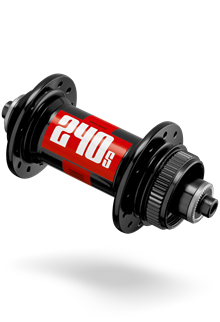 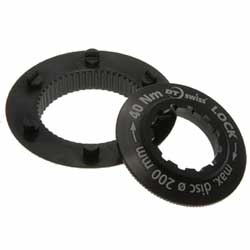 You could also be getting some play in the fork (assuming you have a suspension fork). To verify this, put your finger where the stanchion meets the lowers of the fork, lock the front brake and rock the bike back and forth. Every fork I've had has just a little play there.

It's not likely that the play in your cassette is related to your front wheel. That play could be from the cassette ring being a little loose, or the fit of the cassette on the freehub (likely) or just a bit of play in the hub itself. If the cassette ring isn't loose I wouldn't worry about the cassette play...unless you think it's affecting your shifting.

3
What can be done to fix a hub that has come apart?
4
Can a hub casing be warped/bent?
2
Wheel squeaking at slow speeds and slight play in the wheel bearings, related?
9
Chain stuck between cassette and spokes and damaged rear hub - any way to fix it?
4
How to silence a creaking cassette/freehub body
17
Accident from front wheel locking up on brand new bike
1
Bent axle causing hub to loosen, the other way round, or axle gradually bending?
4
Did I lace this rear wheel correctly?