If I attached a “pointy” pool noodle to my bike, would it make me safer even from sadistic drivers?

A few sources suggest that mounting a foam pool noodle on the back of your bike can help stop drivers from passing too closely. Such noodles are available at my dollar store, unlike spring-loaded bike safety flags. 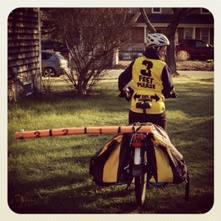 But I fear that both the flags and the noodles may be illegal.

Anyway. I am considering carving such a noodle so that its tip tapers to a "sharp"-looking point. (Pool noodles are hollow. I guess I would carve the noodle asymmetrically.) I would mount it like in the photo, except that I would have it stick out less: only a couple feet (30-50 cm) towards overtaking traffic. I'm not sure how I would mount it on the bicycle. Maybe I'd use a bungee cord.

Related: "How can I prevent cars from passing me too closely?"

Your question really seems to boil down to:

My answers to this;

I can understand that you are scared that a car has passed you so closely and that you want to do everything so this never happens again. This will not be possible. Some car drivers will always try to pass you. I have seen car drivers who drove up onto the sidewalk or onto an elevated tramway just to pass me.

Think about the question of an angry driver: "How can I pass a bicycle which is very broad/in the middle of the road/...?"

The three-foot extension noodle is absolutely obnoxious and a genuine safety hazard (for starters, how is another cyclist supposed to safely pass her?).

The original point of these noodles, as I've seen them, is to cut one as wide as the widest part of your bike so cars could better gauge how much distance they needed to pass you. Perspective distortion and the small width of handlebars can make it less obvious to a driver how wide your handlebars actually are, and the neon color is to accentuate the visibility.

If you cut the noodle to the width of the widest part of your bike, you don't have to worry about someone using it to push you. You also shouldn't bother "sharpening" it, because the point is to indicate "Here's how wide I actually am". If anything, you'd want to square off the ends so it looked more like a |----| shape to accentuate the dimensionality of it.

Cut to the proper size, it's also very unlikely to be considered illegal as it's not materially changing the effective dimensions of your bike.

Oh my! That is my picture & I never had any trouble hitting pedestrians since the noodle only points into traffic & away from the sidewalk. There was not a lot of bicycle traffic on the road, but cyclists had plenty of room to pass me in the same lane. No car ever tried to hit my noodle, but maybe where you live the driver's are more aggressive. The noodle represents the 3 feet of berth that a car is legally supposed to give in my state, so if they can't pass without hitting the noodle they are breaking the law. The noodle bends so unless someone drives around the noodle and then bears in on you, the noodle will bend out of the way & not push you. Again no car ever braved hitting the noodle where I was. This is not meant to stop cars from passing, but it does force them to wait for a safe place to pass.

I'll attempt the first question "Is a pool noodle illegal?" It depends on the country. In Germany (and probably similar in most EU) the vehicle regulation code (StVZO) does not explicitly prescribe dimensions for bicycles, but the general opinion seems to be that the rules for small motorbikes (mopeds) apply (StVZO paragraph 32). This means a maximum width of 1 metre for the bike and also for trailers. This is also what I was told a couple of years ago when I inquired about building my own bicycle trailer.

Load dimensions are in paragraph 22 of the traffic code (StVO). If a load (on any vehicle, as far as I understand) extends sideways by more than 40 cm beyond the shape of the vehicle, it has to be made visible with flags and lights. Vehicles with loads cannot be wider than 2.55 metre in total (exceptions for agricultural vehicles).

The rule specifically says that poles, sticks, flat boards or similar should never extend sideways (I think this means more than 40cm beyond the vehicle contour). Presumably the idea is that they are very hard to see as they have a small contour. They probably didn't have soft foam noodles in mind, but technically these noodles are "poles or sticks"..

What I take from that is: If you fix the noodle in some kind of permanent way, then it's part of the bike and the bike should not be more than 1 metre wide in total. So you can probably only have it stick out about 30-40cm beyond your handle bars (ca 60cm wide). If it's attached loosely, then it counts as a load, but still has to be less than 40cm as it is a "thin pole or stick"

As the noodle is soft and not really a danger, you will probably not be prosecuted but I would expect police will stop you and ask you to remove it if it sticks out more than half a metre.

No. You will slap pedestrians' butts and children's faces with it.

Not the answer you're looking for? Browse other questions tagged safety frugal physics bike-vs-car or ask your own question.

12
How can I prevent cars from passing me too closely?

6
Do cyclists make safer drivers?
4
Would an original Abloy padlock and [toughened] chain make a good bike lock?
2
Can the iBert safe-T-seat be safely mounted behind the seat post?
5
Safety of lateral (flexible) flags to prevent cars from passing too closely and signaling