Average speed is computed so that average speed = total distance / total time. This means that if you go up a hill, which takes a long time, your average speed drops. This isn't regained on the downhill, since going down takes so much less time.

If you compute the average over distance instead (i.e., your speed every tenth of a mile), the uphill and downhill are equally weighted, since they have the same number of samples. This means that your average is closer to what your speed would be on flat ground.

Your speed over flat ground seems more important to me. It doesn't depend on how hilly your route is, and that way you could compare cyclists more easily. Why don't we compute the average speed over distance instead?

Clarification edit: I know that average speeds are computed with time because we care about the average speed -- it'd take me that same amount of time to travel a certain distance if I traveled my time-average speed.

I don't care about time anywhere here (minus speed) -- the definition of average speed doesn't bother me, I'm just wondering why this isn't a more widespread metric.

This is an interesting point of view. Let's unpack this a bit.

If I had an average of 20 mph I should be able to complete the course in 1.5 hours. The trouble is that the course would actually take 1.83 hours to complete at the actual average of 16.39 mph. I know it hardly seems fair, since by all rights you did the vast majority of miles at 20+ mph. The caveat is that you spent by far the greatest amount of time at 10 mph.

Your average speed is always going to be a measure of distance over a period of time. What I think you're trying to get at is accounting for your grade losses (i.e. riding up a hill), but it would be equally pertinent to include losses for wind resistance and friction as well. This would allow you to determine the amount of work per distance (or per time) for the trip, but calculating all of the variables which would verify your actual work is impractical for the average cyclist.

Products like Power Tap hubs allow you to generate torque and cadence data from your rides. That information would give you better insight into your speed with regards to sustained torque and cadence and it will also better illustrate where total resistance is increased or decreased (e.g. going up or down a hill.)

As far as taking average speed over a set distance, you're still averaging. It doesn't matter if your sample is 0.1 miles or 10 kilometers, it is still a measure of distance per time.

Here is some more information on calculating propulsion resistance. I don't remember how to do much calculus, but it is there for anyone better equipped.

The main issue with what you're talking about is that from a mathematical perspective, 'average' already has a strict meaning, and in this context nearly always means 'arithmetic mean'.

If you want to talk about another measure of speed, you have to drop the term 'average speed' at the very least. What your method seems to be referring to would be something like the average of multiple constant interval average speeds, and as such two people both reporting their AoMCIAS could vary wildly, even if they traveled side-by-side.

For example, why pick tenths of a mile? There are infinite variants of division lengths unit choices such that two AoMCIAS numbers can't even be related (unless the distance has been mutually agreed upon before measurement collection). Good luck getting the U.S. to adopt the metric system or the rest of the world to adopt Imperial units, so at minimum you'd have U.S. bicyclists reporting it over 0.1 mile intervals and everyone else at, perhaps, 0.2 km intervals.

For that matter, why use length as the interval control? If you use a GPS, it's storing the data in semi-regular interval time units (depending on the unit and resolution setting), perhaps someone else tries to unify the U.S. with the rest of the world and proposes 10 second intervals as the new standard.

The result is that AoMCIAS speed numbers would not convey enough information in and of their own value, like averages do. You'd have to report them as "24.56 miles/hour AoMCIAS over 0.1 mile intervals", and that value would vary so wildly by interval choice that it could ONLY be compared to other AoMCIAS speeds with the exact same interval. There wouldn't be a static conversion that could be done, either, you would need to completely resample the intervals from raw data, if it was even available.

All of this is completely independent of it's relevance as a speed measure for bicycling (I have a mathematics degree, and don't time any of my bicycle rides). What I mean by this is: it's possible that you could devise a creative method such as AoMCIAS with an ideal interval distance or time such that the number reflects something more accurate about bicycling performance, and it may even be useful inside of the bicycling context (and likely ONLY the bicycling context). However, it will be of little to no value to anyone else, mathematically or even quick comparison-wise in colloquial speech. Two numbers could only really compared with equivalent intervals, and any ability to do neat things quickly in your head with such values would be relegated to special calculators, computer programs, and perhaps some genius savants.

But if you want to "mathematically" increase your average speed, then you can apply this formula and chose a sampling distance which corresponds to your wish.

A statistic is a just a mathematical tool for summarizing data so as to answer a particular question (or set of questions).

The usual definition of average speed relates time and distance, and helps to answer questions which crop up regularly in practice: "how long will it take me to get home?" "can I make it to the café before it closes?" "do I need to take lights on this ride?"

It's not clear to me that there are any practical questions that your statistic helps to answer.

This is really a statistics / maths question rather than a bicycles question.

I think the sum you are proposing would be closer to the median speed than the mean (average). There are 3 key statistical measures that can all be useful:

Mean or average in the case of speed would be distance/time.

Let's say we take the average speed over every 1 minute over a 60 min ride, the median is the speed at which 30 of the samples are below the median and 30 are above.

The Mode is the most commonly occurring average speed.

Using "average over distance" approach: What if your track is so hilly that calculating every 10th of a mile is useless again? Then we would need to use every 100th of a mile. This will get more accurate, but will not be exact.

You could use a unit like "speed per meter". You would have to track the average speed of every meter then, which will be extremely difficult (even with assistance of a bike computer/smartphone). Still, every meter is an average speed, so, mathematically seen, it is still not exact. You would need the speed of an infinite small part of a meter to get the exact speed, which is impossible.

So, from my point of view, it is not done for two reasons:

However, you can calculate anything the way you want. We will not tell anyone ;-)

Indeed your average speed is total distance over total time

Regarding sampling this is where you go wrong:
"If you compute the average over distance instead (i.e., your speed every tenth of a mile), the uphill and downhill are equally weighted."
No they are not equally weighted. The denominator is time (not distance). You need to take even samples in time. You cannot sample on distance if you want to average the sample.

If you sampled every mile then indeed you would get the wrong answer of 15 mph average.

But it is easier to just use total time over total distance.

If you had a magic hill that was 10 miles up and 30 miles down then your average speed would be the average as you would spend the same amount of time going up as down.

You can. But to make the calculus work nicely, you need to invert it:

Consider Is = 1 / s where s is speed in meter per second.

So as soon as you consider the number of seconds for a meter instead of the number of meter every second, it averages on distance.

But that does not make you go faster.

Mainly because it doesn't make mathematical sense. Consider a vertical cliff (the problem is not really related to cycling) of say 1km.

Person A: climbs up and down in 4 hours total

Person B: climbs up in 10 hours carrying a parachute and down in 36 seconds.

It doesn't make any sense that the person who takes twice as long has 100 times the 'average' speed.

(It's also a reminder of why driving fast in a city doesn't get you to your destination much quicker).

You would calculate average speed over distance like this: Sum of (instantaneous speed * roll-out distance) / total distance. On a bike with a magnet on the wheel, every time there is a pulse you just multiply your instantaneous speed by your roll-out and add the product to a running total. To get your average speed over distance at any point, just divide the running total by the distance you have covered to that point.

I think most people arguing against this don't get the concept. Trust me, once you get past the shock and disorientation of NOT averaging over time, it's really simple and useful. Too bad there aren't any devices that calculate average speed this way.

Your speed over flat ground seems more important to me.

Or you want to ignore outliers, correct? The median is remarkably suited for that. Why not collect speed values and then compute the median?

The two methods, collecting the speeds via time or distance are just different sampling methods to estimate the distribution of speeds. One may give a better approximation of the speed distribution, but hopefully the median is invariant to this.

Computing the median has solid theoretical backing: OP would like to minimize the effect of outliers on the data. This is a feature of medians.

We can think of our speeds as a random variable X that changes according to terrain/weather/etc. In continuous time, thinking about the probability distribution function (PDF) of X implies that we collect data points at every instant.

But given some samples, how can estimate the PDF? Probabilists have considered this problem, and have developed maximum likelihood estimation and the Bayes estimator (which requires a prior on the PDF of your speeds X).

EDIT I have generated graphs that show the difference between time- and distance-based sampling. 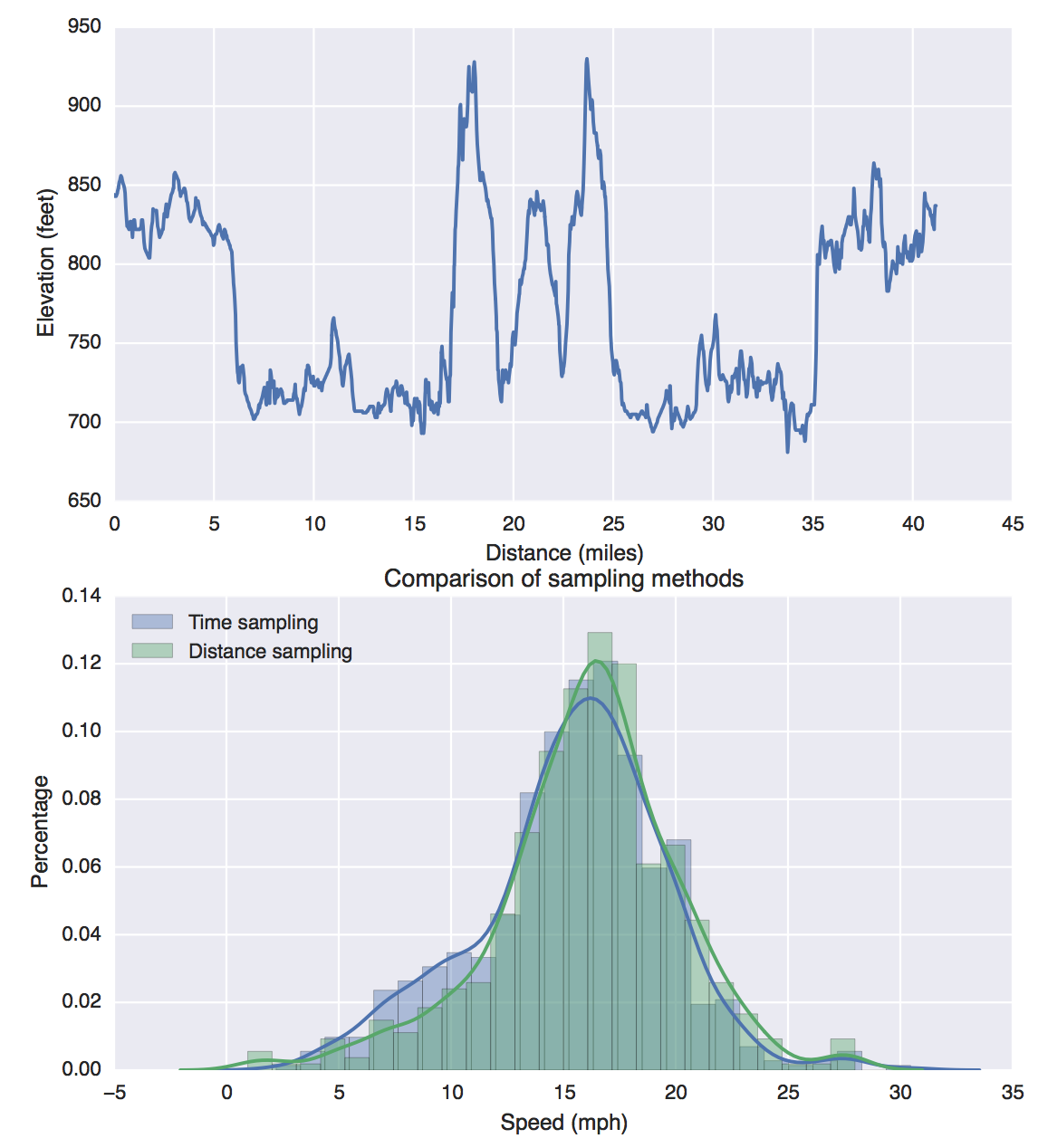 With this data, we collect median values of

6
Why would a bike computer calculate distance accurately but average speed inaccurately?
1
Uphills and downhills vs a flat
0
Does it takes longer to cycle a route with a mountain on it comparing to the same distance without a mountain? What is the cause of that?

70
Why aren't Tour de France riders going any faster?
10
Why does reducing bike weight have such an impact on speeds?
6
Why exactly did Boardman manage a further distance than Wiggins?