Is there any advantage to using pedal straps over clipless pedals?

Other than not having to buy special biking shoes, is there any clear advantage to using pedal straps over clipless (aka clip-in or step-in) pedals?

The biggest benefit I see is convenience. You can just hop onto a bike with whatever you're wearing at the time and go. Not a big deal if you're planning a 15 mile ride, but a real big deal if you're riding around the neighborhood, hopping off to run into a few stores, etc...

It's also possible to pedal on the flip side of the pedal and get moving without the cumbersome and slow start up that is required to get into clipless or straps. In an emergency you can even stomp on the straps and move the bike out of the way. It's rare, but occasionally you find yourself standing there and just want to get out of the way, in any direction.

I've now switched almost entirely to riding clipless though. Between that and riding fixed gear, it makes the bike feel so connected to me.

At this point if I'm riding any distance at all, I change shoes. If I'm just going to the store to pick up groceries, I don't even have straps, just old school pedals. The middle ground for straps just evaporated for me.

Slightly less of a panic when you come to a stop at a light, pause, look down and realise you forgot to unclip - as you slowly fall over.

When the straps are done up properly, you are less likely to pull your foot out accidentally. This is why clips & straps are recommended for track racing .

Since this isn't an answer yet, I'll be the guy to say: "No. There is not any advantage to using pedal straps over clipless pedals, other than not having to buy special biking shoes".

I started using clipless eighteen years ago, and at least in the first few years I would go back to ordinary shoes with strap-pedals for a bit, usually because I wanted to look cool or dressy and didn't want to wear my kinda-dorky clipless shoes. Also, for a while I had a bike with French cranks that only took old toe-strap pedals.

I don't do straps anymore, because every time I'm disappointed in the ride (I'm also married and have a kid and don't feel a need to wear cool shoes as much, but that's secondary). With straps, I feel like my feet slip around, there is less power on the upstroke, and I find it harder to get the right position for my foot. It feels squishy where I have come to expect solidity.

I've found some clipless shoes that look fairly normal, and are comfortable street shoes for walking. I keep them by the bikes, and it's just part of leaving the house for a ride: helmet, gloves, shoes. I tapped out the French pedals, and now it's clipless all the time on all the bikes.

And yeah, I did fall over at a street light, once, in 2000. Embarrassing, but no injuries. Kids who were born that day are now looking at colleges; during their entire lifetime I've been biking all over the place and it hasn't happened again. Clipless now feels like part of my anatomy, the connection does what I want without thought.

Not entirely on-point for the question, but since this will probably be read by people curious about clipless: make sure you try out a few systems and don't assume they are all the same. My buddy and I started out in 1999 on Shimanos because they are ubiquitous, but at some point someone gave him a pair of Time ATACs to try out, and he was like "you have to try these, they are so much better." I tried them too, and agreed, and it's all I've used since. (They are also pretty cheap, for the Aliums). I haven't tried all the other systems, but I can say at least on a Shimano-ATAC comparison for me, it made a big difference.

I put diagonal straps on my pedals before I switched to clipless. There are several advantages over clip pedals (the oldschool toe cages): They are easier to get your feet into and out of, they are cheap, and they allow you to get your feet off the pedal with an outward flick of the heel, just like clipless.

There are five advantages over clipless pedals that I can think of:

Now for the disadvantages:

If you're commuting or cycling medium distances for pleasure and want to sometimes wear regular shoes, I recommend getting clipless pedals with a platform side like the Shimano A530s, which I have on my bike. I rarely wear regular shoes, but when I do, they work fine. The SPD clipless pedals prevent my feet slipping and make me feel much more connected, and I don't need the extra features and power transfer of road cleats. I wear cycling shoes which look like regular ones.

Also, don't listen to people saying you'll be falling over left and right when you start. It's only when you get complacent that that can happen.

At one point straps were very popular with the winter riding crowd. Years back, there were few (if any) companies making cycling boots that were actually warm. It was possible to wear a pair of pack boots and still have good efficiency while strapped in. With so many companies making good winter cycling boots, this has become less of an issue.

As far as advantages, the only one I can think of is alternate foot positions (if such a thing can be considered an advantage). Clipless (cleat style) setups require the cleat go in a fixed place on the shoe. This means while some angle and float adjustments are possible, it isn't possible to change where on the bottom of the foot the pedal is attached while riding. With straps, you can twist your foot, move a bit forward or back and still stay strapped in. Meaning, with straps you have some limited adjustment of contact point while riding.

Old-school cycling cleats had a big chunk of plastic attached to the bottom (pictured below)—the cleat. The cleat had a horizontal groove that fit snugly over the backplate of a traditional rat-trap pedal; once you got your foot on the pedal and the cleat in place, you'd tighten your toe straps and be very effectively locked in.

In the early days, the soles of cycling shoes were leather or wood, and you'd ride around without cleats until the backplate left a mark on the sole; you'd then nail or screw the cleat into place to align with the mark. Later, the soles had captive bolts inside them that let you reposition the cleat, so you'd ride with the cleat loose until you figured out what worked and then tighten it (aside: some early clipless-pedal cleats also had to be screwed directly into the sole).

Compared to traditional cleats and toe clips, modern clipless pedals have a lot of advantages. Clipping in is easier. Clipping out is way easier (everyone who rode in toeclips and cleats had the experience of failing to clip out in time at a stop and falling over…good times). The absence of a toe strap is much more comfortable (in the early days of clipless pedals, shoe uppers would detach from the soles because the shoes weren't designed to contain the force of the upstroke, but that was remedied within a year). Clipless pedal systems can be designed for a certain amount of rotational float and different release tensions. Old-fashioned cleats would get a little float just from the groove wearing down. 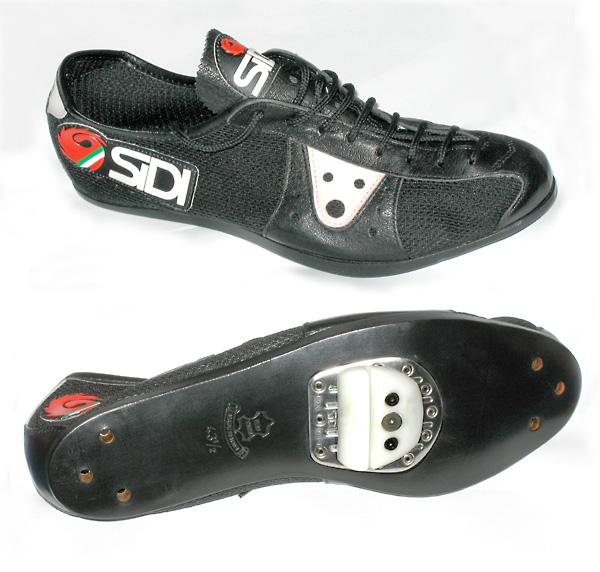 Strapped-pedals are generally frowned upon for some strange, unknown reason. However, I would do away entirely with them, and instead, make sure I'm using correct foot positioning. Correct positioning on the pedals is pretty much all the clipless shoes achieve, aside from slight raise from pedalling too, but this advantage is somewhat negligible.

I went clipless, and loved it, great for pure power riding. Then I went to straps and found it a pain trying to get the straps to the right tension where I could pull my foot out and push it back in with ease.

I then went back to standard metal-teethed pedals and a foot positioning similar to clipless pedals and then wondered why I even bothered with the others....

It's personal opinion really, but I'd say scrap both of them. :)

2
What are the advantages/Disadvantages to clip and clipless pedals?