How to choose the right Citi Bike?

It's 2013, and bike sharing has finally made it to New York City. Of course, the branded cruisers aren't the most speedy bikes on the road. They weigh a whopping 45 pounds, and their third gear - their lowest gear - isn't nearly low enough, making pedaling down even a slight slope practically useless.

Still, you can get moving if you pedal furiously... and if you pick out the right bike.

During a test conducted by New York Magazine, bike messenger Danny Koniowski hit a top speed of 27.5 mph on a Citi Bike. He did so only after picking out a choice bike.

After inspecting and rejecting the first two Citi Bikes he came across at a Citi Bike station on Canal Street near Sixth Avenue — one for having misaligned tires and the other for being, in Danny’s professional opinion, “a piece of shit” — our test-rider finally settled on a suitable specimen.

I squeeze the tires before I choose a bike, but what more should I do? How can I quickly inspect my next Citi Bike to make sure I've picked a well-tuned cruising machine? Or at the very least, a bike that's not "a piece of shit"?

Typically you would want to do an ABC Quick Check - the information below came originally from the League of American Bicyclists site.

Check = check it over

Edit: The comments seem to indicate that some people think this list if overkill. However, take a step back and remember... You are picking out a bike that doesn't belong to you, that you don't maintain and that really you know nothing about. True, you probably aren't going to measure the chain, or have a pressure gauge in your pocket, but I would spend MORE time inspecting a citibike before I ride off than I would a bike of my own. I am certainly going to look fairly close to see if anything is loose, broken, or way out of adjustment, and the mnemonic ABC Quick Check is an easy way to remember what to look for.

There are some good answers here, but none describes a pre-ride check that is both quick and covers the main problem points encountered with Citi Bikes. These cruisers are special. They are extremely heavy, they can only be ridden in short spurts, there is nearly always a dock within a 10-minute walk, and the bikes are used and abused by riders and passersby that don't give a snot about them. As I've come to discover, there's a special way to give these special bikes a once-over.

Follow these rules and you'll give yourself a pretty good chance of finding one of the Citi Bikes at the station that's not "a piece of shit." Follow the official pre-ride guidelines or a list that's a page long, and you're probably defeating the purpose of these heavy, comfy, sticky and slow public bikes: convenience.

I'd check the following:

Look for obvious signs of damage. In particular look at the wheels, tyres, handlebars and pedals. Really you're just checking that everything is pointing the right way. If anything doesn't look right, pick a different bike.

As You Get On

Stand next to the bike, grab the handlebars, and push the bike forwards as you walk alongside it. Check both wheels rotate freely and listen for any unusual sounds (rubbing, grinding). Pull each brake lever in turn and check that the brakes operate correctly (you should be able to lock the wheel). Spin the pedals backwards and check that they rotate freely, listen for any unusual sounds.

Straddle the bike. With one foot on the floor, put most of your weight on the bike and check the tyres for underinflation (look for bulges at the bottom of the tyre). Start cycling slowly, check the brakes again. Check the gears operate smoothly. Off you go...

As an update to this, there are now multiple versions of Citi Bikes. The ones you want (if maximizing speed is your interest) are these ones: 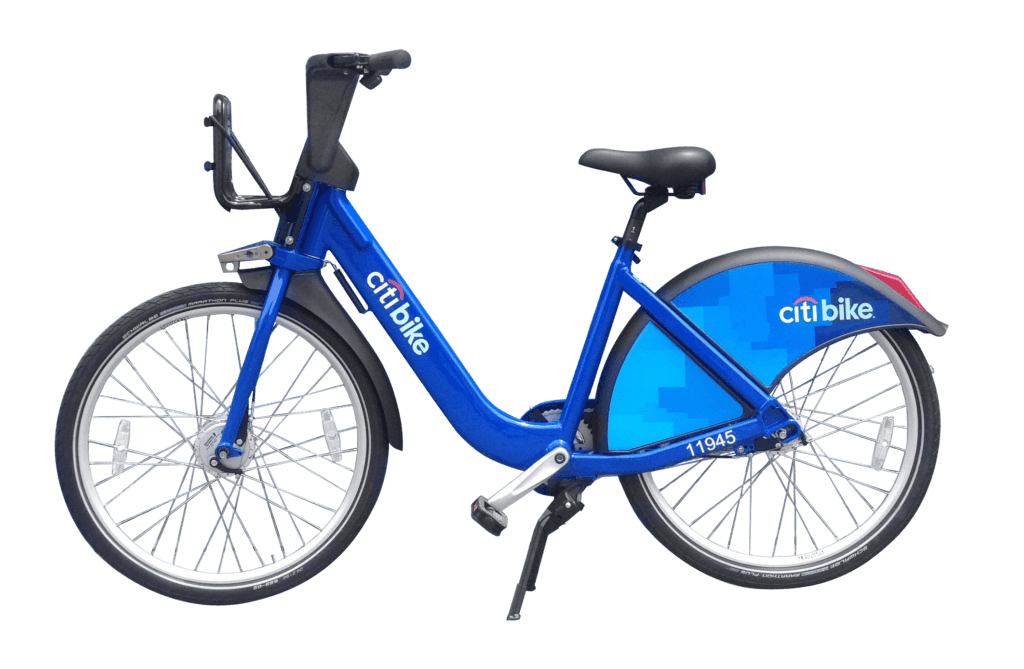 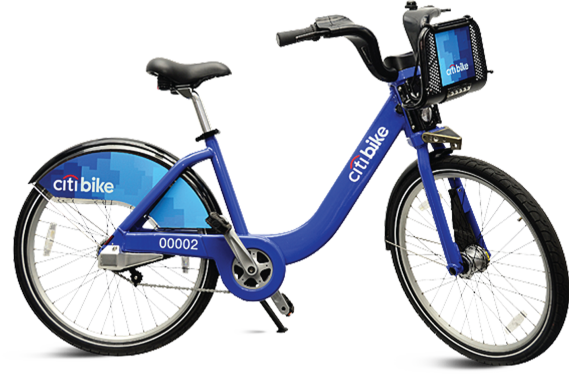 I'm not really sure what the exact difference is, but I've found the performance of the good bikes to be noticeably better.

Finally, there is now a subdivision of the "good" bikes: some of them have three discrete gears, while others have a continuous shifter. I've found the continuous shifter ones to be noticeably worse than the discrete ones. Unless, for some reason, you really need the precise shifting, try to find one with a discrete shifter—they're the ones with numbers in the shifter, not a triangle scale: 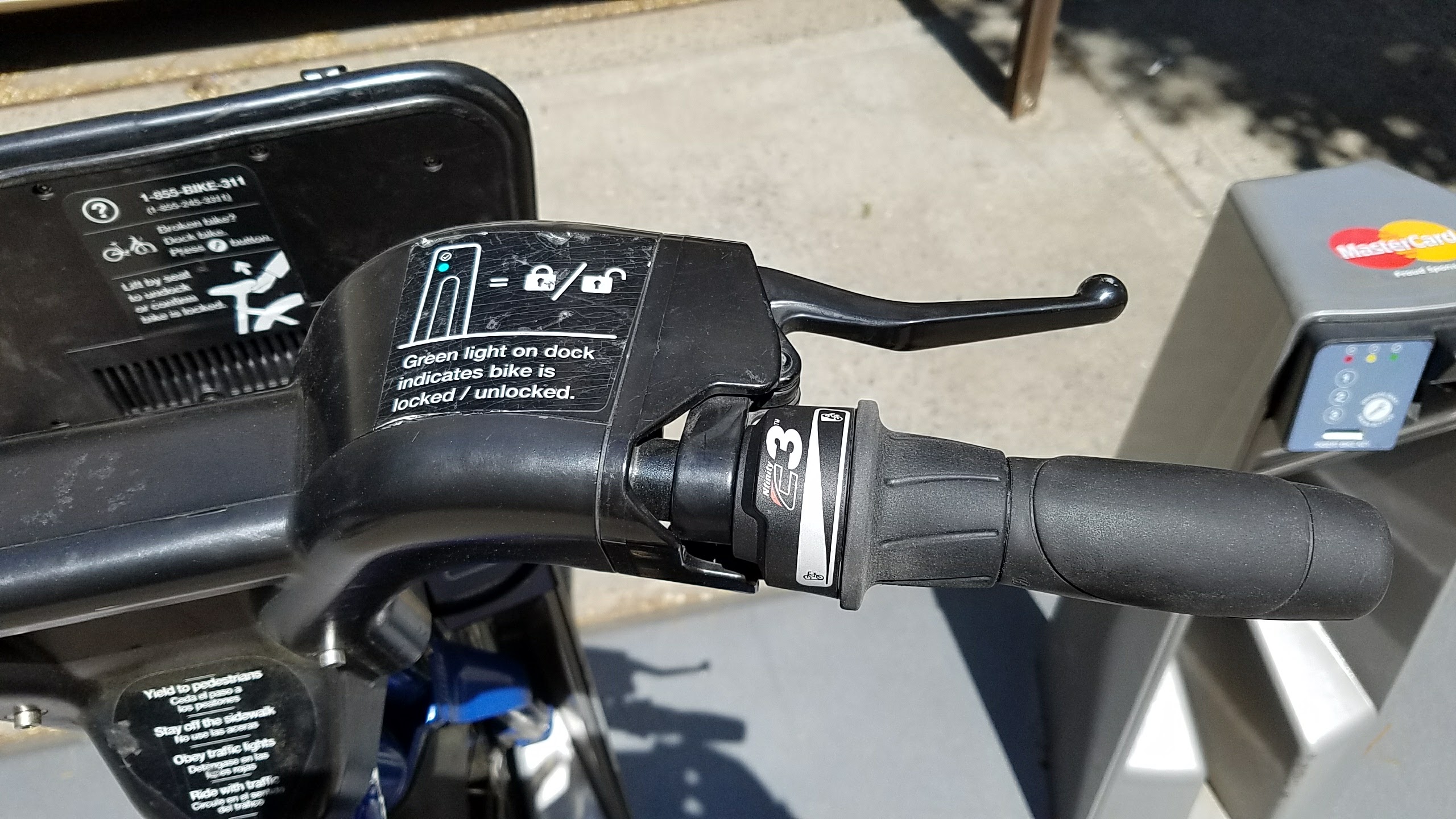 So far, I've come across one bike with a broken pedal, and one with a seatpost stuck at minimum height. So eyeball the pedals.

In other cities, it's apparently become conventional to put the seat backwards on broken bikes. I've seen it occasionally here, as well.

This article mentions 4 things to check for picking a right Citi Bike.

14
Is there an (un)official rule about twisting back a seat on broken bike for CitiBike or other shared bike programs?

3
How do I find the right derailleur (gear-mech)?
14
Is there an (un)official rule about twisting back a seat on broken bike for CitiBike or other shared bike programs?
5
How do I find the right size of bottom bracket?
0
How old is my bike
3
What are the advantages of having more than one bike?
5
Did I pick the wrong bike?
1
Please help me find the brand of bike on the pictures