I'm replacing the crankset and bottom bracket on my old steel frame road bike, which looks like this one, so I'm guessing it's from around 1985. I picked up a 68 mm square taper bottom bracket and found that I couldn't fit the non drive side bottom bracket cup in. The drive side is fine, but the other one can't fit in at all, even with all the other parts removed (to ensure nothing was getting in the way). The old one (from a cottered crank) fits in fine and rotates without problems, and there doesn't seem to be any deformation or damage. Do I simply have the wrong part? Is the possible the part is defective?

Here is a picture of the bottom bracket. I don't have calipers so I couldn't get a decent measurement, but the left cup seems bigger, and the pictures seems to confirm this. 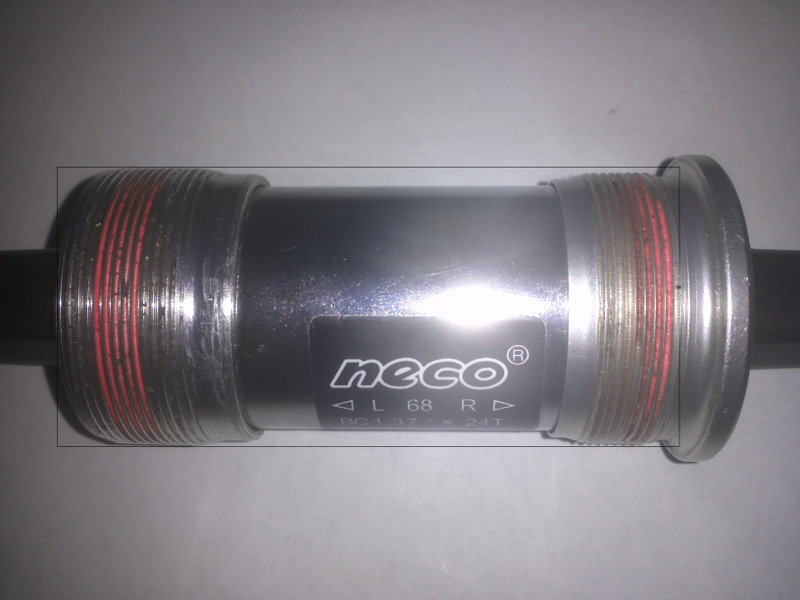 Is it possible that you bought an Italian threaded bottom bracket for an English shell or vice versa?

For the two scenarios above, compare the two cups of each bottom bracket to themselves (ie old to old, new to new) by placing them outside down on a flat surface. Now look at the threads. Do they pitch in the same direction or opposite? If the threads pitch in opposite directions then you have an English bottom bracket, which is more common. If they pitch in the same direction, you have an Italian bottom bracket, which is less common, but can be mistaken for English as the drive side cup has the same pitch and TPI as an English drive side cup- the width is just a little different. Here's the best ASCII diagram I can muster:

It would be easy to mistake an Italian BB for an English one (or the other way around) as the drive side cup would thread in fine and the width is very similar. Once you get to the non drive side is where you would run into trouble, which matches up pretty well with the problem you described.

So I took it back to the shop. Turns out that something got messed up at the factory/supplier, and the left hand cups on a bunch of their English bottom brackets was actually Italian, which means they were larger and wouldn't fit.. There were able to find the proper size cup from a bottom bracket with a difference spindle length. But they opened 2 or 3 other boxes and they all had the same problem. They were quite thankful to me to alerting them to the problem.