What are some bike sharing services out there? I know that there have been some in Europe. Here's wikipedia's entry.

This is one that I heard of recently in NYC. http://www.transalt.org/campaigns/bike/bikeshare?

I think that as cities make themselves more green, these will become part of the norm like rental cars or Zipcar.

Do you know of any new ones? Hear of anything starting in your city? Anyone out there that is a member of bike sharing services? What worked and didn't work? I'm really curious about what can make them successful.

My hope is that this post will generate honest and useful feedback so that companies offering these services or new companies can utilize the info here to improve on current offerings.

Barcelona has had a bike sharing program for about 3 years now, Bicing. Overall it's been a success with a huge amount of people signing up and using them every day.

Other than that it's a great service when there aren't problems (I got charged 20 EUR when either the bike I had used got stolen or their system had a stroke and their records showed me having a bike for 8 hours, when I'd returned it after 26 minutes).

People have criticised using vans to micromanage the bikes, arguing that it offsets any ecological gains.

It initially cost 20 EUR/year, and is now 30 EUR/year. The pricing is:

There is a bike sharing scheme operating in Dublin and it works pretty well. The scheme launched on September 13th 2009, so less than year ago, and as for today more then 1 million journeys were made

The uptake of people was way grater than initially predicted, to quote the wikipedia

Approximately 1,000 people used the bicycles in the first six hours (day of launch), with a further thousand people having subscribed to use them.2 Some 11,000 people applied in the first fortnight and Dublin City Council's supply of subscriber cards was reduced to zero, with the Council having initially targeted a 5,000-person uptake in the first year. More than 25,000 people had applied to take part in the scheme by March 2010

As for the points that I think made the scheme work:

On the pricing, the bikes are intended to be used for short journeys within the city centre and used by as many people as possible as opposed to be used by one person for a whole day, and the pricing reflects that. Once you pay one year membership (currently 10 euro) then the following prices apply:

So as you see the first 30 minutes are free, and you should easily be able to reach each destination in the area operated by the scheme within that time. So cyclist leave the bike at the station as soon as they reach the destination, they do not hold on to it (e.g. keeping for the return journey). In that way a single bike can be used by more people

The city of Montreal, Quebec, Canada has had one for a while. I think that there has also been one in Europe.

I saw a documentary on CBC's DocZone that had some info about these systems. I think that you should be able to watch it online

The scheme is currently on around 15,000 journeys a day.

Boris Bike is a bike sharing scheme in London, the "Boris" part comes from the mayor's name. 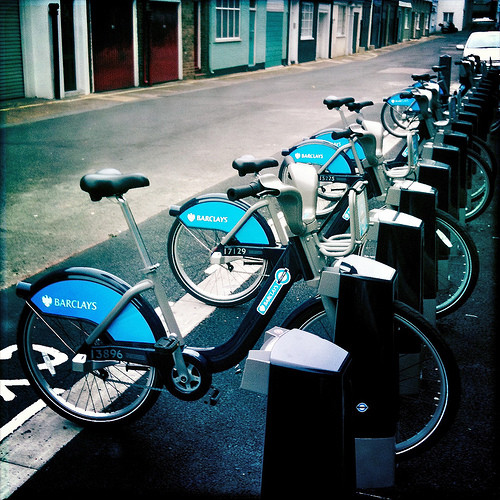 ...has a three-season bike share program called NiceRide, featuring lime green cruiser bikes available at stations around the city. The bikes are quite comfortable, and an annual membership is $60.

The first "season" for NiceRide finished in November, here are some numbers from their end-of-season report

NiceRide has plans to expand in 2011, including building stations throughout the other member of the "Twin Cities" - Saint Paul.

In France, there is the Vélib' system operated by a private company with subsidies of the city. The same company operates the same system in many other cities: Lyon, Nantes, Toulouse, Marseille, Caen, Besançon, Nice and probably others that I am not aware.

The main advantage of such systems is that the population of bikes on the streets is increased and automobilists become more careful.

Is supposed to be installing one this year, 3800 bikes and 250 stations according to their last report.

But - cycle helmets are required here ($100 fine) and the scheme doesn't propose hiring them - so it's going to be limited to existing cyclists. General opinion is that the money and space would be better spent on secured parking for peoples own bikes.

Don't have time to go through this now, but here's a link to the Vancouver bike sharing program.

CityCycle is an active and sustainable public transport option aimed at reducing traffic congestion and parking pressures in the inner city, as cars are replaced by cycle trips.

The largest bicycle sharing system in the world. 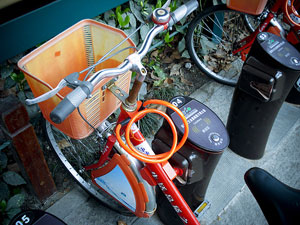 Bike sharing stations can be found in Hangzhou every 100 meters compared to the 300 meters in Paris. The first hour is free to users in Hangzhou, followed by 1 yuan ($0.15) for the first hour, 2 yuan the second hour, and 3 yuan each additional hour. During their first year operation, no bikes were stolen and very few were damaged or vandalized compared to the half that were stolen or damaged in Paris.

...just started a bike share, and of course it has to be the largest in the US. I prefer to measure size by 'number of bikes being used per day/week/month' rather than 'number of bikes available in the system'. (Maybe there should be a per capita normalization, too.)

At any rate, the Greater DC area is an excellent place to ride a bike.

Incredibly, the city in the US that's often considered the friendliest to cyclists seems to have no bike-sharing system. There was an informal program in the 90's, the Yellow Bike program, but it was officially abandoned. (Although, maybe that's not the case?)

In 2008, they seemed to have given up on it, but the city website is hopeful and says they're currently evaluating bike-sharing programs.

The system has yearly, weekly, and daily passes available. There are 50 stations available in the city, with a total of 600 bikes. Helmets are not supplied.

This June 2010 video tells you more about the bikes, but in case it goes away: The bikes are heavy, they have step-through frames, and are very, very blue.

Another interesting bike sharing system. What's unique about this system is that the bikes are free to use. 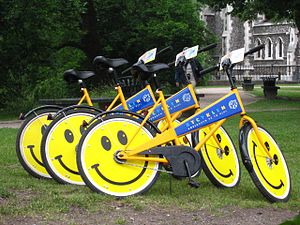 Copenhagen City Bikes or Bycykler København is the bicycle sharing system of Copenhagen, Denmark. Launched in 1995 with 1,000 cycles, the project was the world's first large-scale urban bike-sharing scheme. It features specially designed bikes with parts that cannot not be used on other bikes. Riders pay a refundable deposit at one of 110 special bike stands and have unlimited use of a bike within the specified downtown area. The scheme is funded by commercial sponsors. In return, the bikes carry advertisements, which appear on the bike frame and the solid-disk type wheels.

"Hubway" is the equivalent to London's Boris bike here in Boston. They just showed up on the city streets this summer. I was also very surprised with how much of a success they are considering how heavy and clunky they look. Boston has a respectable number of bike riders and I was shocked to see more people riding these than personal bikes the first week after their arrival. My girlfriend does not own a bike and these made it possible for us to go on a bike ride around one of the parks here.

Based solely on my own unscientific observations, the vast majority of the riders appear to be tourists but apparently many have signed up for annual subscriptions.

I was curious if/how they redistributed the bikes between stations. My girlfriend said that she saw them moving them with a van in the middle of the night.

The Hubway currently has 61 stations and has added 600 bicycles to Boston neighborhoods. - The Daily Free Press

With excellent coverage of the old city center and linkage to an extensive bike trail network (on the sidewalks!), this system is well loved and well used, but it feels a bit worn down (the bikes are in terrible shape) and the system is old and cumbersome (not the excellent system now in use on London and Boston and soon to be deployed in New York). Still, it's an essential part of any visit to the city. 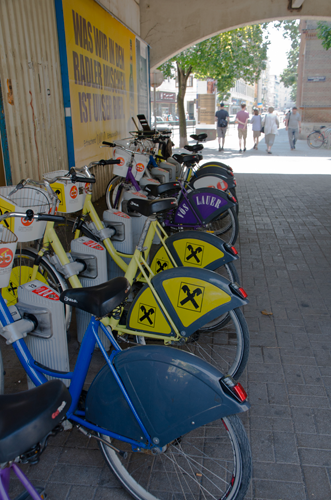 Madison B-Cycle http://madison.bcycle.com/ is a three-season (no winter; spring starts April 1) bike-sharing service, available on the Isthmus (downtown) and in a few outlying areas of west and south campus. The step-through, three-speed Trek bikes are equipped with dynamo head and taillight, front basket, and skirt guard.

Anecdotally, I've seen a fair few of these out on the Lakeshore Path around Lake Mendota.

Scratch Bikes is a bike sharing scheme in Newcastle upon Tyne that grew out of a Newcastle University venture.

I was on campus at Texas A&M University when they first piloted a bike-sharing program called "Borrow-a-Bike". Of course, students thought it was a joke, because everyone knew what would happen: the bikes would all be stolen or destroyed. Like clockwork, all the bikes that were placed on campus were no longer available after about a week or so. A few even wound up in trees. Just because.

Apparently the idea stuck (or was revived), though. There is currently a Borrow a Bike program using these: 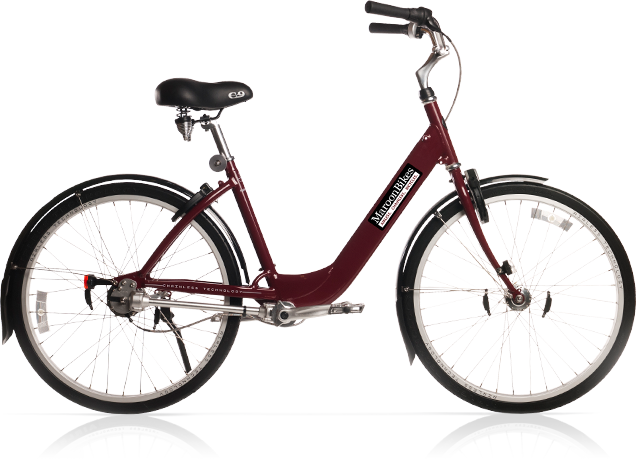 In my bicycling history book, Bike Cult by David Perry, the author indicates that historically such schemes tend to fizzle out in a few years as the badly-maintained bikes remain unridden and the better ones get stolen or abandoned outside the area of the program.

We tried one briefly here at the university where I work, the "green bike" program. It lasted a couple of months.

If it can be made to work I applaud; difficulties remain maintainance and repair, adjustment to individual riders, workable pickup and drop-off points...

Not the answer you're looking for? Browse other questions tagged reference sharing-scheme or ask your own question.

19
Urban Cycling Safety Innovations
8
Do any bike sharing schemes provide a way to rent or share helmets along with the bikes?
5
What is a “Boris bike”?
5
How can I rent a bike in Paris (France) for a short time?
3
Headtube Badges

205
Terminology index - a list of bike part names and cycling concepts
5
What is a “Boris bike”?
9
Charities that accept bike donations
8
Do any bike sharing schemes provide a way to rent or share helmets along with the bikes?
0
How to attach maps, etc to handlebars of a Boris Bike? (London bike hire scheme)
13
Is there an (un)official rule about twisting back a seat on broken bike for CitiBike or other shared bike programs?
3
How can I reduce back pain on a shared bike with poor shock absorbers
1
What do I need to do to get bike sharing costs included as part of my commuter benefits (USA)
2
Where can I return a Gobee bike in Paris?