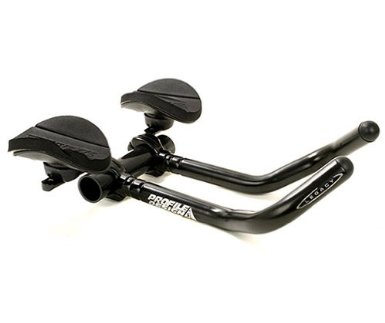 The first one is a bit straight and the second one with a rise towards the forward end.
Can anyone please list the pros and cons of the 2 designs?
I am new to cycling and I hope that this question is not closed as a product recommendation because I am asking about the design.

First, one small point. The two pictures show different types of extensions, not bars. Bars are still what the extensions attach to (Commonly called either aerobars or bullhorns).

Extensions come in various types, including (but not necessarily limited to) S bend, F bend, straight, skip tip. Each have their advantages and disadvantages. Most wind tunnel tests have shown that the hands angled slightly down so the line is straight along the tops of the wrist arms is faster. However, this may not be comfortable for some people depending on distance and position.

Of just as much if not more important is the shape of the base bar, and the extensions/pad system being used. The entire aerobar/extension setup (Commonly referred to as the cockpit) is also highly dependent on rider position, and often the canard used in the TT/triathlon world is that you almost determine your cockpit first, and then your frame.

Caveat- One of the last Tours that Levi did, his bike was set up according to UCI rules, but he had it at the limits and was still able to approximate his praying mantis position. I remember Liggett commenting on it at the time.

However, unless you are competing in a specific National level time trial or higher where UCI rules apply, you can safely ignore the UCI guidelines.

As it is a huge impact both in comfort and performance, I highly suggest you get with an experienced fitter. Time trial/triathlon frames and setups are vastly different, as are the measurements and frame designations. (A 54cm is not necessarily a 54 cm, etc.)

Here's a photograph of a professional rider (Matt Goss) that I took during a time trial at the Tour de France a couple of weeks ago. 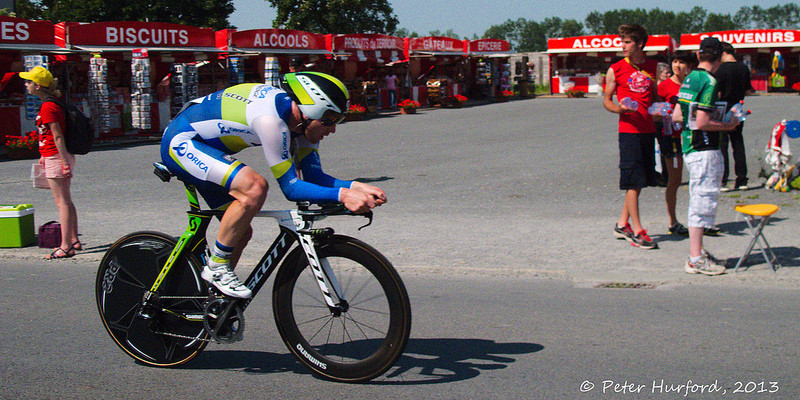 Clearly he's going to be using top-end kit, a dedicated bar rather than some bolt-on aero bars. But if you ignore that and look at his position, he is riding with dead flat bars - your first option, or close to it. I took a lot of photographs on that day and this was pretty much universal among the riders I watched.

Unfortunately I have no idea why this is, so I'm only really offering an insight rather than a proper answer. When you look how low his hands are compared to his head, it is difficult to imagine that having his hands a few inches higher (i.e. using the second shape) would make any difference as regards aerodynamics.

But there again, these guys will have spent hours in wind tunnels working on their TT position, so it is probably not a bad assumption to say that the position we see the rider in is pretty much his optimum position.

So in terms of aerodynamics I would suspect your first bars are better, but I have no real idea why this is, other than that's how I've seen the professionals ride.

Each of the two is comfortable for some, not so much for others. I occasionally turn a wrench in a shop that caters to Triathletes and by FAR the preference is the straighter bars (S-bars). Most of those that go with the J-bars are doing so with a conscious decision to exchange comfort for a bit more power (and while the Triathlon bike portion is similar to a TT, comfort biking plays a much bigger role as you still have to run once you finish the bike). The J-bars force your wrists into a position where they are under tension, you have to grip the bar even if just lightly. With the S-bar you can cut the length to where the palm of your hand is just resting on the end and can ride with very little tension in the arm; the (small) con with the S-bar is that you can't use as much upper-body when powering up a hill or going for a hard acceleration.

Both of the pictures are of clip-ons and both share a couple weaknesses. These are designed to be added to a road bike and doing a Triathlon or TT fit on a road bike with clip-ons is going to be less than ideal. For other purposes, they do offer an additional position that you can ride, but they also take away a position; you can now ride with your forearms on the clip-ons, but you lose the position of having your hands on the straight portion of your drop-bar.

Clip-ons also, generally, leave the shifting where it was, so if you are using the clip-ons for TT/Tri, you put yourself at a disadvantage of having to move your arm to shift.

If you are looking at this for purposes of a Tri, I'd recommend holding off until you are ready to buy a Tri bike. Just ride your road bike in the mean time. You can actually get in a better aero position on a road bike by using your drops than you can by adding clip-ons.

If you do go with clip-ons, as others have mentioned, get a good bike fit from someone with experience with TT/Tri fits.

Not the answer you're looking for? Browse other questions tagged road-bike handlebars speed design or ask your own question.

4
Effects of design on speed?
2
Pedaling in Rear Wheel design
8
Knee position while on the aero bar
1
Commuting on flat terrain/handle bar
3
Are there geometrical differences between framesets optimised for flats vs drops, other than top tube length?
12
How to bend handlebar to customize it?
2
Getting my first Road Bike
12
Feasibility of bike frame design by a layperson
0
New bike for commuting and touring