Can I carry my tandem on a bumper carrier?

I would sometimes like to transport my tandem by car, and it would be convenient to use one of those "strap-on" bumper carriers. Is it feasible to use this type of carrier?

If it sticks out from the width of the car DO NOT carry the bike in the bumper carrier. If necessary, take both wheels out but take no chances, anything wider than the car is a danger to yourself and others, think about motorbikes.

If the tandem is loaded onto the carrier at an angle, it won't extend much beyond the width of the car or minivan (maybe not at all for a larger vehicle). It's not totally clear in the following picture, but the horizontal bars are tilted up a bit to make it more secure. 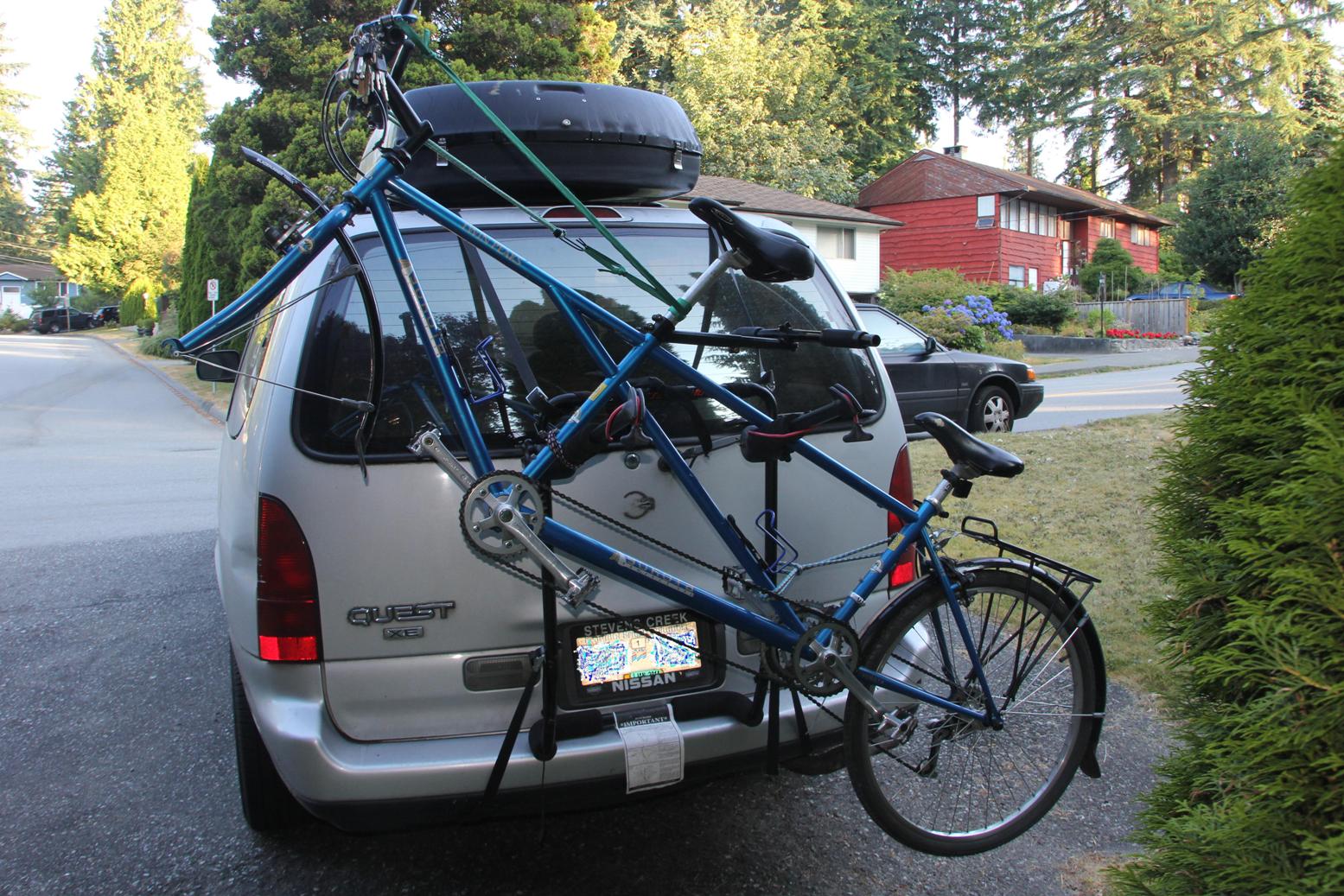 It's necessary to bungee-cord the bike or otherwise secure it otherwise it'll tend to slide "down" (in my case, the front will tip down, which will make it stick out on the driver's side). I use 2 cords to secure it: 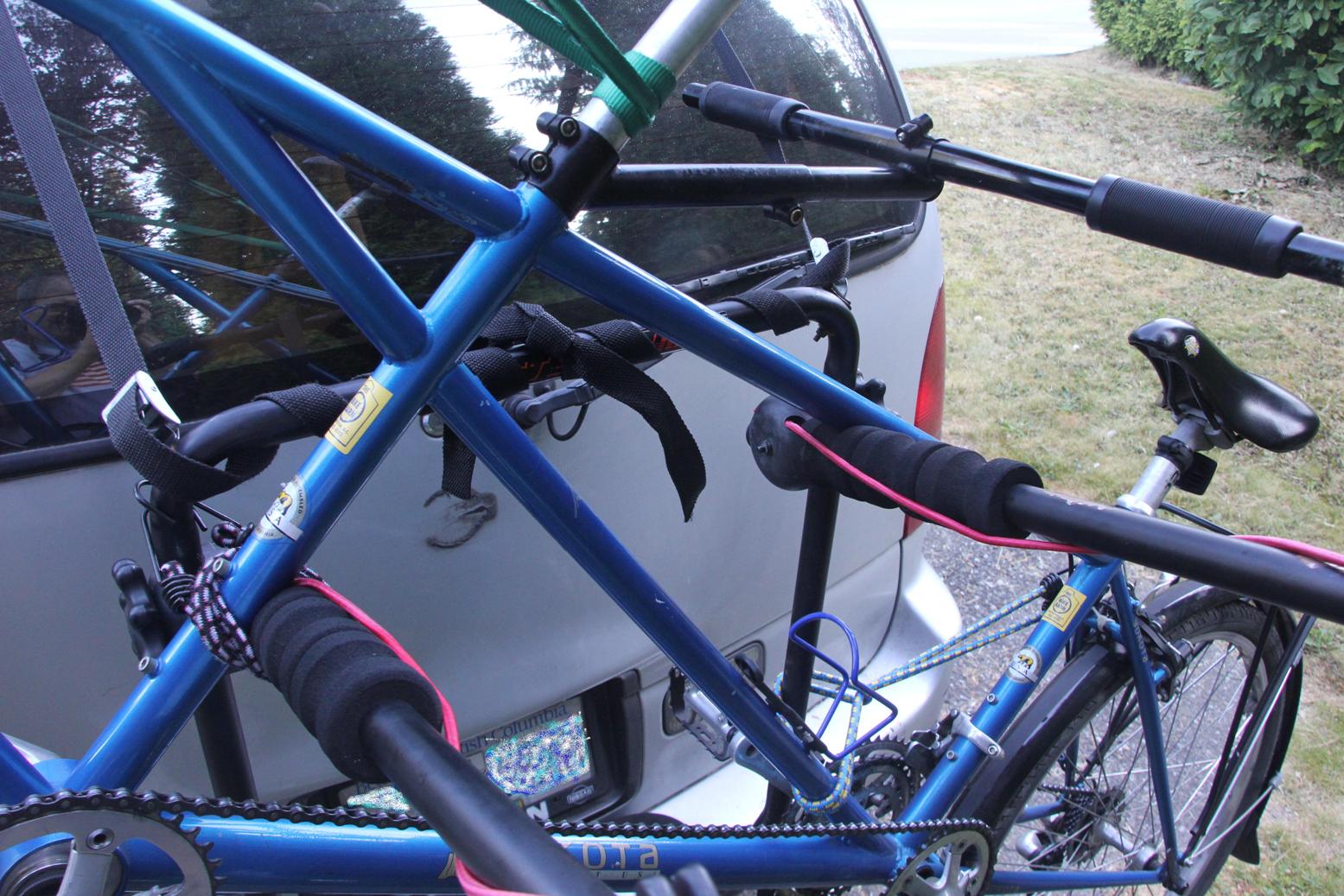 Although it looks ridiculous, the same technique can be used on a small car: 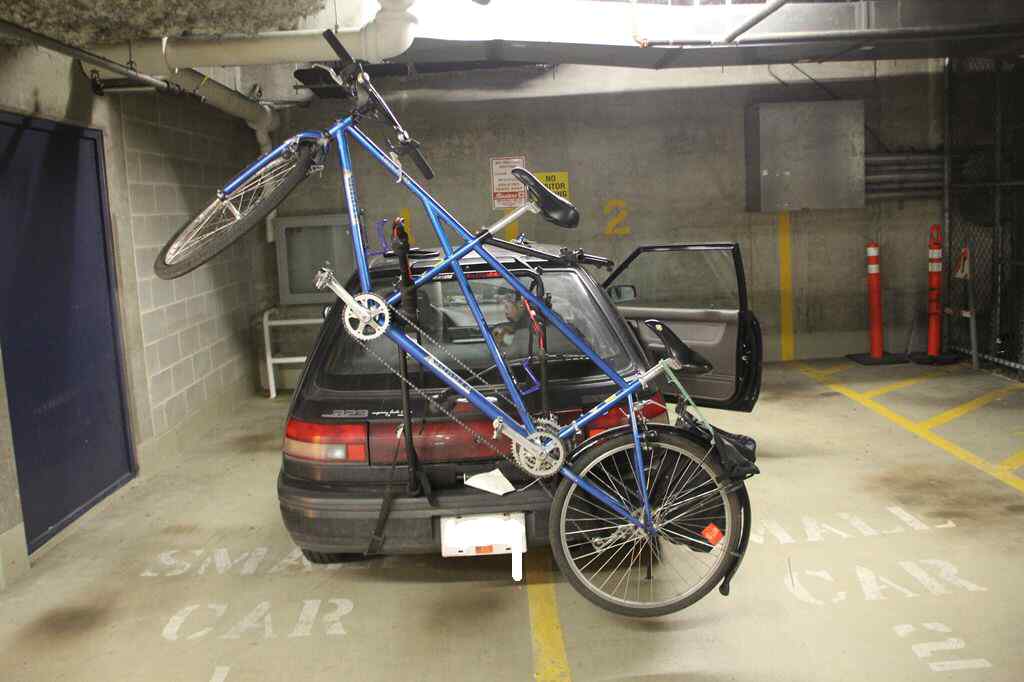 The bike doesn't actually stick out beyond the width of the car as much as it appears to in the picture, it's less than a foot on each side. It does stick way way up above the car, however, so when I've done this (only a couple times) I'm very careful about going into underground parking.

Can you tow a trailer with your car? That would be the safest and most responsible way to move your tandem.

Second option would be to ride it there, over the course of a day with rest stops you and your co-rider could do 100 km.

Another option would be a roof rack, like others have mentioned. Your vehicle's roof looks long enough to accept the full length of the bike. Brands to search for may incluide Thule. Possibly you're looking for three cross bars, and two normal "bike rails" in line-astern or as close to that as possible. May have issues with the front bottom bracket being super low, which means an adapter to raise the front fork a bit more than normal.

Please let us know what you end up doing.

Not the answer you're looking for? Browse other questions tagged car-rack tandems transportation transport-by-car or ask your own question.

12
Is there a do-it-yourself way to tow a kid's bike?
0
How can I transport a Madsen bike?

13
Are there any recumbent tricycles that can be transported with a normal car?
2
Where Can I Find a Single Right Front Crank Arm for a Tandem?
2
Will These Bike Racks Fit a 2002 Citroen Berlingo?
2
How should I transport Cannondale Bad Boy 5 INSIDE a BMW 4 Series Coupe?
11
Is it ok for the trunk bike rack to rest against the glass of a hatchback?
2
How to carry Xtracycle by car?
3
Cranksets for tandem with internal gear hub
8
Independent drivetrains on tandem bicycle
1
How should I tie a bike to a hitch mounted bike rack to keep it from swaying into the bumper of my vehicle?