I came upon this marvelous explanation of headset types.

However, this got me wondering. Isn't the role of the headset cups similar to that of the derauler hanged - to not waste the frame as soon as some wear-outable components ends it's life? How do frames with integrated headsets survive more than several years? 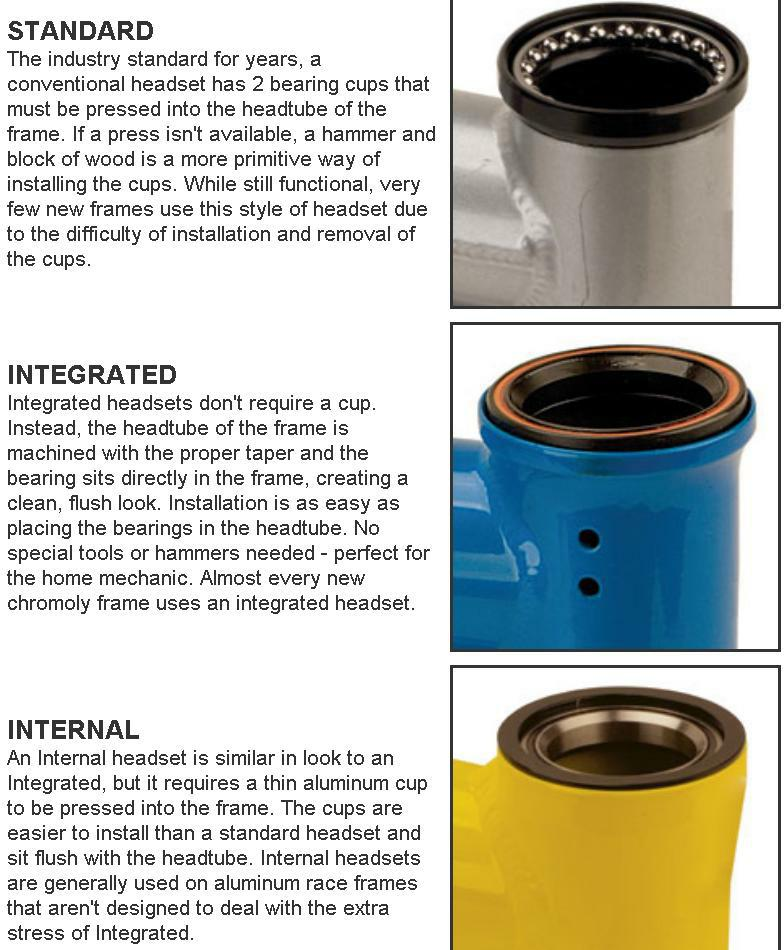 Here's an excerpt from Chris King about headset types:

What is an “Integrated” headset?

It is a bicycle frame, fork and bearing system designed to eliminate the humble headset cup. To integrate means to combine and hopefully to simplify. What has been “integrated” by the integrated headset? The bearings now rest inside the frame instead of inside pressed-in cups. All of this trouble and confusion is to remove two 12 gram headset cups from the front of your bicycle. True, an integrated headset can give the bike a nice, smooth looking front end, but the consequences of this change to your bicycle are significant.

Simply put, the performance and lifetime that you expect from your new bicycle will be reduced, most severely in aluminum mountain bikes. All bicycle frames that use integrated headsets will ultimately have substantial performance and reliability problems due to the inherent flaws in this design. The largest flaw is a bearing system that does not positively attach the bearing to the frame, leaving the bearing to “float” resulting in wear and impact damage to the frame.

As an additional complication, each manufacturer seems to be doing their own thing, with no real standardization to date. As a result, there are multiple bearing types and sizes (some of which have been discontinued with no replacement options) and the frame builders and bearing makers are not all working from the same drawings. Lack of standardization is a bad thing for everyone. It means that you may not be able to get replacement headset bearings for your bike, and you will need them.

So, to answer your question, yes, an integrated headset will eventually wear out, but that service time is dependent on riding type, style, number of hours, and quality/material of the frame.

You can read more about all three types: Integrated Headsets Explained

if you run your headset out of adjustment continuously you may wear some slop into an integrated headset, but running a headset too loose can cause damage to any headtube regardless of the headset it accepts.

one final point for clarification, installation for an integrated headset into the headtube does not require any special tools. Installation of a standard or internal headset into the headtube will require a headset press as they both use cups that must be pressed into place. Once the cups are in place replacing the bearings requires nothing more than a hex wrench to remove your stem and top cap with. Installation of a crown race will require a special tool (if you want to do it right) if it is not a split type race- split races go on with no special tools. For removal of any of the above,if it took a special tool to go on, it will take a special tool to come off. Yes, you can use a screwdriver if you don't mind gnarling up your components.

I'm pretty sure that the stress of changing worn-out press-fit cups does more damage to a head tube than the drop-in integrated variety.

Changing a set of cups on a frame is a high-stress, creaking, cracking job requiring dedicated tools with lots of mechanical advantage. If you don't use the right tools you need to use a hammering action, which is even worse for the frame!

Integrated headsets have never ruined a frame in all the years I've been working on them.

TL;DR: Headset cups are more play-safe, but the IS headset is simpler to 'fit', and though the mass manufacturing industry is as 'unsophisticated' as ever, most consumers don't care much anyways. It'll wear out eventually, but nothing much to worry about unless you do a hundred barspins every day.

From a layman's and manufacturer's perspective, it is the perfect standard as the consumers simply slip the bearings in and out they go, while the manufacturers don't get much flak in their machining tolerances as the demographic goes closer to being "always updating and upgrading" than "bike designs lasting a lifetime".

From a stingy engineering perspective, it has a few issues:

Engineering principles mainly walk along "tolerances as tight as possible relative to purpose" so in that aspect, IS headsets can be a bit sketchy to look at.

That said, it's not that it doesn't work, it's just that it's a system that reflects more consequences when executed improperly. Just like pressfit bottom brackets, it's actually nigh-perfect when manufactured and fitted in the same nigh-perfect level of standard.

Headset cups are either the actual races (old style) or made so bearings are press-fitted to them. The softer cups gall to supplement the imperfections, turning it into a practically solid interface.

On a final note though, headsets rarely go full 360 degrees (except probably on trick, DJ, or BMX bikes), so there's more leeway and less to worry about.

does no one in this thread understand that the mounting surfaces are beveled? once under proper torque from the steer tube top cap, they won't wiggle. This taper fit has been the norm for serviceable bearings in machinery for many, many years. When properly installed, this system adds life to a frameset, not shorten it.

Integrated headsets use sealed cartridge bearings, so extra cups are superfluous as all of the moving parts are hidden away inside.

The image is wrong when it says you don't need special tools. There are special tools for both the installation and removal of integrated and internal headsets.

My point is that they are removable and replaceable. Having one wear out doesn't ruin the usefulness of a frame.

I can see why Chris King would talk down on integrated headsets about being a flawed design since they first came out into the BMX scene,what,12 or 13 years ago?His business was based on the old cup design!Integrated headsets not only eliminated 1 or 2 grams of weight,which is really nothing,but also simplified assembly by a long shot.Who would still want to hammer their cups into their headtube when they can just slip the bearings into their heat treated headtube,cut installation into a fraction of the time and just ride away?A sport like BMX is all about evolution in all its forms and disciplines and he knows this.If he also made bottom brackets,would he say the same about when they went in BMX from American to Euro to Spanish and Mid?Probably,I'm pretty sure.But for example,each change in BMX technology as far as bearing development and application has improved tenfold since its introduction into the sport,and in every step along the way.Every company in the industry just joined and snowballed the evolution of the sport and the technology used to improve on things that were once flawed designs.Hell,my first integrated headset was a FSA Impact and I got it in 2005.Believe it or not,I'm still riding the crap out of it.Yes,to this day.It's been on 7 frames,ridden hard on each and every one of em and still laughing at me as it asks for more after each session.So definitely I'll be the first to say that it's not that much of a flawed design.Sorry Mr King,but you were wrong with your speculations about integrated headsets being brought into the sport.I'll agree to disagree...

DanDan
1
1
Add a comment  |
Highly active question. Earn 10 reputation (not counting the association bonus) in order to answer this question. The reputation requirement helps protect this question from spam and non-answer activity.

Not the answer you're looking for? Browse other questions tagged frames headset or ask your own question.

3
Please describe what an integrated bottom bracket is
3
Do I need to face my new frame?

5
Do road bikes use the same width headsets?
9
Why don't frame manufacturers ream/face their frames?
2
damage to carbon road frame at the seat stay and drop out junction
1
Have some new parts on hand but need new frame - frame swap reasonable? or sell and purchase new bike?
1
How to repair a broken steel frame, at the rear drop out /chainstay location
4
Should I use anti seize for headsets and press fit bottom brackets in a titanium frame?
2
Do the cups of headsets with cartridge bearings wear out?
1
What headsets can be used to replace the FSA No.57/No.61BP headset?
1
How to get water out of the frame?
3
Trying to figure out what brand this frame actually is