I've been starting to commute by bike more (about 6 miles each way) and decided to upgrade from my cheap, old mountain bike to something more suitable. I just bought a used 2009 Kona Jake off Craigslist. Pretty excited about the bike -- it came with fenders, rear rack and two panniers.

Previously I've just carried everything in a messenger bag or backpack when riding. Panniers are new to me. What are some tips you have for packing and riding with panniers? I'll be carrying a laptop part of the time and beyond that a book or two, a lunch, maybe some clothes and other miscellaneous bits.

Unfortunately, the bike's in to get a tune-up so I can't recall the make of the panniers. Beyond the rack hooks, there's also a strap that runs from the middle, has a hook on the end and some velcro that attaches to the top of the bag. I can't figure out what they're for.

Here's a photo of my new (used) panniers. They're by D2R. 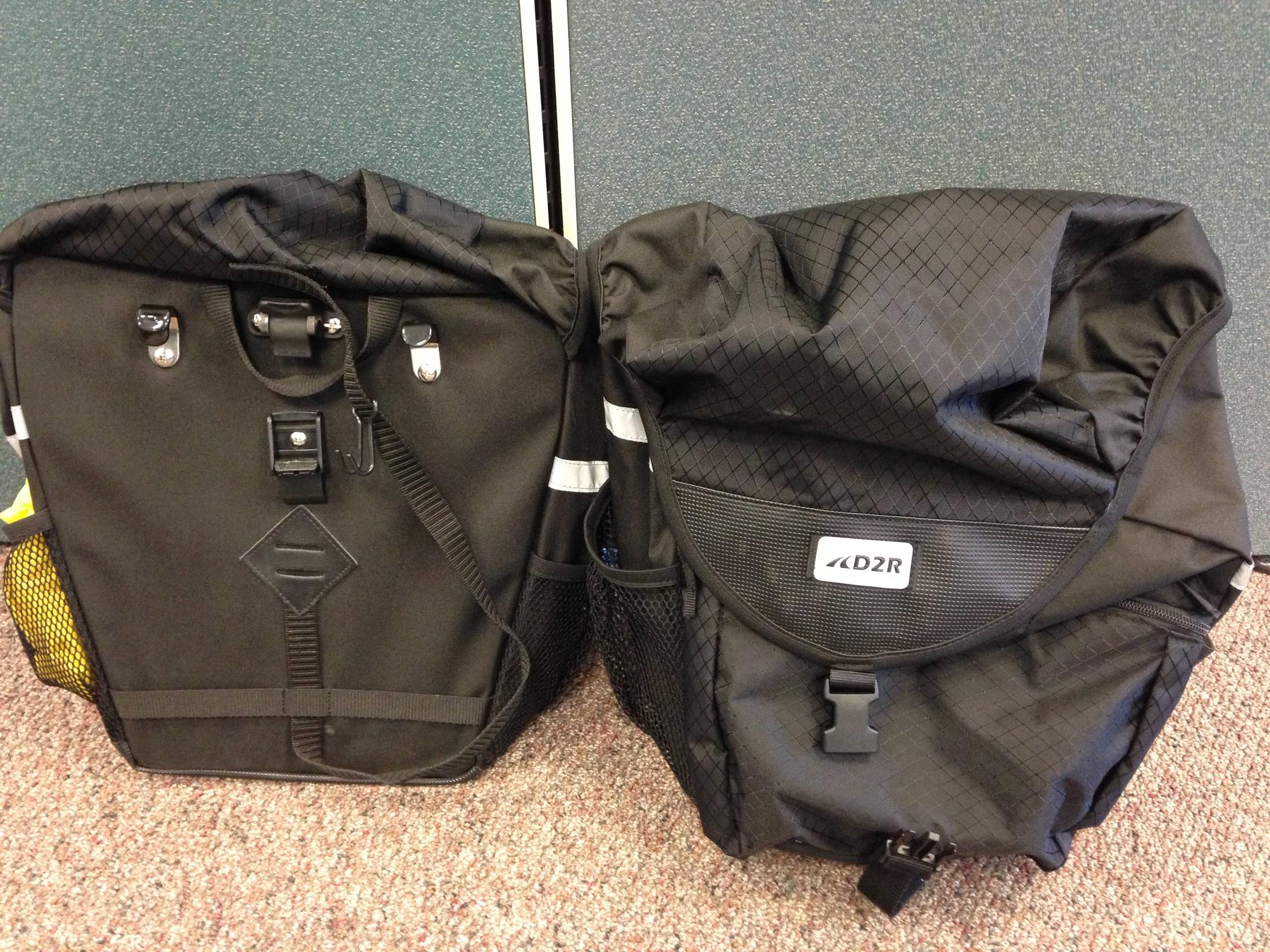 In general panniers are more comfortable and efficient than carrying weight on your body. There are some things to be aware of, however.

Safety. Every time you set off, make absolutely sure that all the pannier straps are done up. Apart from things falling out, the last thing you want is a loose strap getting caught in the spokes. This can wreck a wheel, and a rider!

Regarding stopping distance, I don't think it makes much difference as the weight increases the friction between wheel and road. However, the extra weight does contribute something to heating the brake pads and rims/discs, but it's probably only an issue on long steep descents which are unusual on a commute.

Panniers getting in your way. Yes, aim to keep your heel clear of the bags. This can be different when the bags are fully-laden as they tend to bulge further than expected. Worst-case you can pedal with your toes pointed down to avoid heel-strike, but this isn't comfortable for long. If you swing your leg over to get on and off then definitely take a bit of extra care to avoid pratfalls. Also be aware the rear of the bike is slightly wider.

Left-right loading. Ideally it's nice to have them balanced, but unless there's more than 5kg difference between the sides, I'd say it's not really noticeable. So if all you're carrying is clothing and spare shoes, then it should be fine to take just one bag. However, if it's a stack of books consider two half-filled bags.

Vibration and bumps. In my wife's experience, laptops seem to suffer from vibration in panniers more than rucksacks/messenger bags. Hers acquired a serious soundcard issue after being bounced in a pannier back down a slightly bumpy road. I'm not talking about crashing or dropping the bag, just riding the normal bumps in British roads. Your road surface may vary. Putting sensitive kit on your body is less comfortable for you, but more protective for the kit.

Consider waterproofing. If the contents are sensitive to moisture (like the laptop), then you may want to double-bag unless you're really confident in the pannier's waterproofing.

Tire pressure. Adding weight to your bike means you'll need a slightly increased tire pressure to prevent pinch-flats, particularly for the wheel over which the weight is situated. There's another question with some more information on calculating the best tire pressure, but ideally it should be done per-wheel and adding panniers to the rear will make this more important.

The strap that runs from the middle with the hook on the end may be to wrap around the lower part of the rack (and possibly back up to the pannier). The aim may be to stop the pannier from swinging out away from the bike or from jumping off when you go over a bump, but in my experience if the strap is made of elastic it doesn't prevent this. The best design to stop the panniers hopping off is a clip which fully-encloses the top horizontal bar of the rack, as is found on Ortlieb and many modern panniers. If you want more detailed advice, post some pictures when you get the panniers back.

EDIT: Looks like those panniers have non-elastic straps which is good news. I haven't tried ones exactly like that. You'll have to use your judgement as to whether they're secure and the straps won't fall into the spokes. Do not let them flap and fall into the spokes!

I commuted for years carrying just one pannier. In fact, I have a pair of mismatched panniers because I wore out one of each original pair. If you just have clothes and incidentals in the bag, one pannier is certainly sufficient -- you will barely notice the slight off-balance.

Definitely worry about heel spacing. Figure out how to get the bags as far back as you can, and note that most bags have a preferred side, so that the forward face is sloped back to give more heel clearance.

For commuting and light touring the change in stopping distance is hardly noticeable (and obviously no different from the same load in a backpack). A fully loaded setup (with 50-80 pounds of gear) will increase your stopping distance proportional to the change in weight (ie, a 20-30 percent increase), but this is generally not a problem unless you ride aggressively or have some long downhills to deal with.

The strap you describe sounds like it's intended to hook near the axle and keep the pannier from swinging out from the bike. This hook also keeps the pannier from "jumping" off the bike on bumps, and must be securely fastened at all times while riding. When the pannier is properly secured you should be able to almost lift the bike by lifting up the pannier.

I've been commuting by bicycle even since I learnt to ride as a kid, and I've never commuted in any other way. I'd like to add one aspect that nobody has mentioned yet: be wary of theft.

If you stand at a traffic light in a busy city, and have a visible laptop-bag in a pannier at the rear, it can be all-to-easy for someone to grab it and ride away with it. Therefore, you should make sure that your panniers can be properly closed and are not too easy to take off. Stealing from an open pannier is much easier than ordinary pick-pocketing!

Something to take care of is the increase in influence from side winds, and a small increase in aerodynamic drag.

I used to bike in Amsterdam, in the Netherlands, which is often a bit windy, and you can immediately feel the difference riding with and without panniers.

It can be sometimes fun to have to manage your bike stability in strong wind. See this video to see an example :)

One thing that surprised me about using panniers to commute was that the inside of the panniers had an influence on the stuff that I put in them. In particular, my panniers (JandD) partially expose the back sides of some of the mounting clips inside the bags themselves. I found that this exposed hardware scratched up my laptop one day; it could similarly mark up clothing or other possible undesirable things if painted surfaces are involved. I'd recommend "double-packing" the work equipment you add to your panniers to make sure it comes out fine when you arrive.

If I don't have much on a given day, should I just use one pannier or try to distribute between two? In general, how important is it to keep them balanced?

If it's not heavy then it's not important, assuming it's close the wheel (so not much torque). I expect it's easier than a top-heavy back-pack.

When I have more weight, how much will it change the stopping distance and the bike's balance?

Unfortunately I expect that depends on how good your brakes are, and the weather (i.e. on whether your rims are wet, which reduces the effectiveness of brakes). In contrast my bike has hydraulic disk brakes, which are always more than strong enough to stop the bike (so that I never apply full squeeze to the front brake).

Panniers vs. Rucksacks in weather:

In hot weather I always use my pannier(s)...a rucksack on your back will decrease your ability to cool down, regardless what the manufacturer says!

In very cold weather I sometimes switch back to a rucksack because it keeps me warmer.

Panniers can catch the wind and take the bike away from you and some people find it easier to handle the wind on the rucksack. Personally I find the lower centre of gravity of the panniers easier to manage.

A quick note - rucksacks are generally easier to carry off the bike if you need to walk any distance.

40
What pressure should I run my Road Bike tyres at?
11
Would a backpack or cargo rack be better for commuting?
1
What will I need to consider when modernizing a pre-1990s steel frame?

26
Touring load weight distribution
7
Making panniers out of canvas map bags -- how to seal after the build?
12
Recommendation for panniers to carry a laptop for daily commute That's available in the UK
9
How to prevent my bike from tipping over when using just one pannier?
1
Guidance for buying large double saddle panniers
2
Which rack top bag fits an 11" MacBook Air with space for a little padding?
11
Why are most commuting panniers designed as shoulder bags and not backpacks?
7
Pannier Bags for Burley Kazoo
4
What can I get for panniers to commute with my 17" laptop?