Why did my tire explode?

Been running a set of quite nice slicks at 120-140 PSI for a couple of months. Might have done 400-600 km on the bike in that time. Tonight the rear tire exploded while the bike was sitting in my entryway. It's split right along the seam, with a roughly 2 inch long gap. Very loud bang etc.

Before I go out and buy another $70 tire, I want to get an idea of what caused this. Some possibilities that I've thought of include:

Edit: added a picture. Looks like the tube has a ~1cm hole in it. 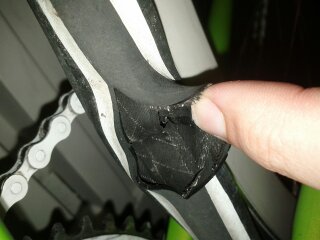 From the picture it appears that the tire simply failed. It may have gotten "bruised" at some point, or the cord may have simply fatigued to the point of failure.

Without examining it in person it's hard to tell where the split started, but it appears to have split mostly along the joint between tread and the white sidewall. In general, white sidewalls make the tire weaker, both because the white material is not as durable and because there's a necessary seam between sidewall and tread.

Also, the tire likely has some sort of belt under the tread area, and, in such a narrow tire, that can result in fatigue along the edge of the belt.

The heating/cooling vent could have been a factor if hot air were blowing directly on one spot on the tire, but seems unlikely if it was cooling air.

And, of course, it's always possible that you had cut/bruised the tire at some point and it finally let go.

Age would be another suspect, but you indicate you've only had the tires a few months, and it would take several years for that to be a factor.

My guess is cords were damaged on the ride creating a weak spot. Threads held together long enough to get you home and a bit longer, then ripped apart. This kind of delayed and catastrophic failure is not uncommon. Heating vent might have softened them enough to make a difference, but the tire was damaged anyway (assuming warm, not very hot air).

More puncture resistant tires may help prevent it in the future, but you cannot prevent it completely.

The size of the hole in the tire, and the hole in the tube are irrelevant, its a symptom of the tire failure, not the cause. Once the tire fails, there is nothing stopping the air pressure inside the tube expanding - the tube cannot stop it, it gets pushed though the tire, making that hole bigger and blows up and pops just like a balloon, hence the bang. If you were listening closely, the bang was preceded by a short ripping sound.

Either you damaged the casing or it was defective to begin with. Once it starts to go it basically zippers open in an instant. The white tread and the vent had nothing to do with the failure, but the 140PSI certainly could have encouraged it. That's not to say it wouldn't have happened eventually at a lower pressure anyway, but to digress slightly, just because your tire says you can run 140PSI in it doesn't mean you should. At some point you are actually slowing yourself down by running higher pressure (unless you're rolling on a glass flat surface, which you're not), and you are most certainly making your ride less comfortable. This gives me the opportunity to post one of my favorite graphs: 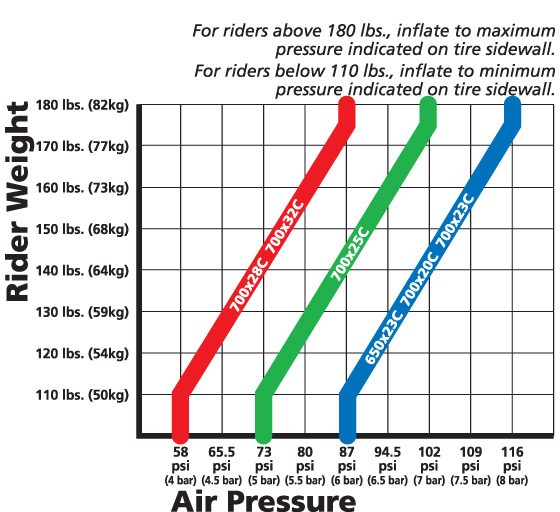 No reason to be dogmatic about the pressures listed here, but they do give you a good starting point. Don't always pump your tires up to their max pressure. Even if they say they can handle 140psi it doesn't mean you should pump them up that tight. It makes the ride more uncomfortable and it does put more stress on the casing and bead of the tire. If something is going to go wrong with the tire, it's more likely to happen the more air you put in it.

Not the answer you're looking for? Browse other questions tagged maintenance tire or ask your own question.

10
How did bubbles form on my tire?
1
Why did my tire just blow up?
4
Why did my tire fail?
6
Tire Repair / Maintenance
1
How can I stop air leaks unscrewing a tire from compressor?
21
Why would a tire be for trainer use *only*?
0
Tires explode way under rated pressure limit
5
How easy is it to explode a tubeless tire whilst seating, and how do I avoid this?