Currently I am cycling a lot with a backpack (specifically a chrome citizen), whilst the bag is brilliant it's just not big enough for everything I'm carrying, and with a lot of weight in it it hurts.

I've just bought this rack, and I'm looking to invest in a new set of panniers or some form of rack bag for my bike.

On a day to day basis I'm carrying at least one camera body (at the moment a big heavy Canon 1D body), a large telephoto lens, a wider lens and a flash. On top of this I have other items, such as my bike lock, a pad of paper and a small ThinkPad laptop (~12 inch), it would be nice to also have a change of shoes if possible.

I'm looking for some panniers which will:

What would best suit the above? I should probably add I'm in the UK. 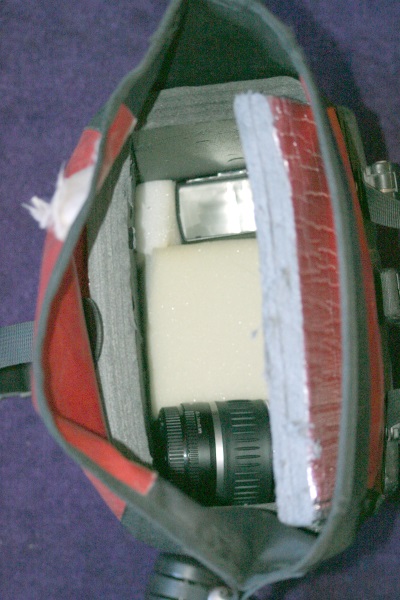 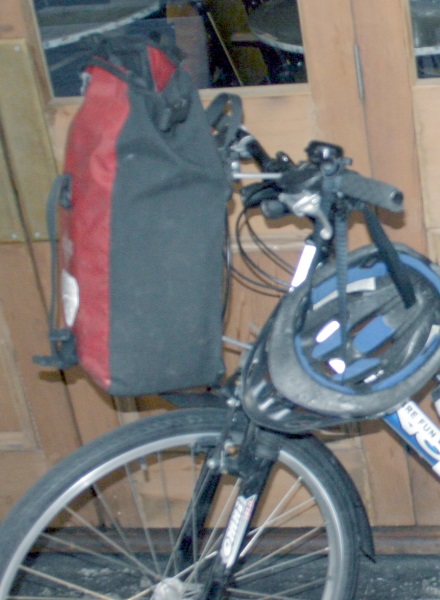 I found a picture of how I did this! You can see the firmer, black foam with foil that I used on the outside, and the bits of softer foam that I used to pack everything in. The flap poking up covers the top when the pannier is closed. This photo is from when I was putting it together, so the contents is not well arranged. I make a simple frame so I could use the pannier as a handlebar bag so it got the benefit of the suspension fork.

I started out with an Ortlieb front roller, which is a smallish squareish pannier. I had a 300D + 70-300/5.6mm at that stage, so it was also fairly small. I got a sheet of foam about 30mm thick and carefully cut and folded it to make a box that just fit into the pannier. I added an extra layer at the bottom, since that's where most of the shocks come from. Then I cut more bits of foam to nest the camera and lenses. Basically set it up the way you'd set up any other camera bag, and arranged so that opening the pannier let me lift the camera out eaasily. Obviously this filled the whole pannier, so on tour I ended up with two full size rear panniers plus that front one. But the camera survived 10,000km or so of riding over several years.

With a larger camera you will need a larger pannier to start with, or sacrifice some of the padding. I suggest getting a large pannier, and making a padded camera bag out of foam to occupy the top half of the pannier, then making a cloth bag to hold that so you can lift the whole camera out easily to access the rest of your stuff. I'd probably keep my d lock on top of the camera round town so it's easy to get to.

The foam I used was house insulation foam with foil on one side. That worked well to stiffen it and make it more wear resilient - otherwise getting the foam box out of the pannier would have inevitably worn away the foam (I used the pannier for other things too). So a cloth cover would do the same thing, and should be easy enough to make as it doesn't need to exactly match the shape of the foam.

If you're looking for a commercial solution I doubt you'll have much luck - I've never seen anything. The best would be a small-ish camera backpack to hold most of the camera gear, then a pannier with everything else in it. That gets most of the weight off your back, but the expensive bits still benefit from the suspension effect of your body.

What I use now is a Crumpler camera side-bag that looks a lot like their bike courier bags but has a fuzzy interior that catches velcro, so I can use padded camera bag dividers to slot camera gear into it. It was easier to add the courier strap to a camera bag than convert a couier bag to camera gear (but it's not a great courier bag if you're on and off the bike all day).

For touring I have a custom recumbent bike with a special bin behind the seat to hold my camera backpack. I have a Desley bag that holds a laptop or a 1D body, but it's not quite high enough to hold both easily. It does, however, max out the cabin luggage size on most airlines. For getting onto the plane I usually put the camera around my neck, often with a big lens on it to bring the bag under the weight limit).

After reading something over the weekend, how about a trailer. This has the advantage that when you stop you can have all the gear in whatever bags you would like, as well as keeping the weight low and stable, and having room for tripods etc.

I haven't been able to find anything suitable, though with the added requirement of comfortable carry off the bike (ride then hike). However I don't tend to ride far or fast with the camera gear, so ride with it in a rucksack (a Lowepro that doesn't seem to be made any more, but is max cabin bag size and slightly teardrop shaped so I can look over my shoulder, it also keep the main weight low and steady). I only have a 40D but tend to have my Sigma 120-400 lens if I'm riding, which is a bit of a beast.

If I'm not carrying the big lens I can put the camera (+flash etc.) in a small case in my pannier as well as a netbook (the pannier takes big laptops). The camera with long lens would fit in the pannier, but without much room for anything else.

I have carried a DSLR in a front basket, but really wouldn't recommend it - it's a lot of weight to carry upfront even with a light rig, and a lot of torque on the bars, plus, it's a long way for it to fall (as is a rucksack, of course, but that's more stable).

If I had the time and the need I would consider modding something - basically pop-rivetting pannier hardware onto a suitable camera bag (as all panniers appear to be top-opening), reinforced with stiff plastic sheet inside. But I would give it a hard test ride with bricks or something in before putting anything valuable in there.

You may want to check your insurance would cover breakage - I would if I had a 1D.

I carry a 5D to and from work in a pannier reasonably regularly. I always take the lens off, an put it in a hard case with good foam inserts, and then it's usually packed in with my clothes etc. I wouldn't go mountain biking like this, but for road commuting I haven't had any problems with it.

When I take larger camera gear with me - video cameras and lights and mics I put them in the trailer that I got when I was carting my young kids around. I have a piece of foam that I put on the floor to take some of the bumps, but as long as you're not thrashing it I'd say it's no worse than putting it in a car. My kids seemed to have survived being lugged to kindy a few times a week in it.

Tenba, Ape, Timbuktu and a number of other camera bag manufacturers' sell the inserts used in their bags separately. Do a search on Amazon for 'camera bag insert'. These fit well inside Ortlieb Office Panniers. However, most of these inserts are limited to carrying a standard DSLR without a vertical battery grip. Like other water-resistant panniers, it takes a bit of time to gain access to your equipment using this approach. I have used this approach for several years. I typically carry a Canon 7D, 100-400mm zoom, 24-105mm zoom, 100m macro, 1.4x teleconverter, flash, better beamer, and filters spread across two rear panniers mounted to a Tubus Disco rack. I carry spare camera batteries, some filters, cleaning materials, and CF cards in an Ortlieb Handlebar bag.

The Carradice Super C Rear Panniers can carry up to 54 liters and are the largest panniers I could find. The dimensions posted on various web sites tend to vary considerably and I was unable to find one to learn more about what could be inserted inside the pannier because of its shape. Still looking for one of these before the spring cycling season starts.

Standard Ortlieb rear panniers have a tapered height but their office panniers are rectangular and were the source of my original solution. In looking at their latest bags, the Ortlieb Vario Commuter Backpack Pannier is a cross between an Ortlieb Pannier and Ortlieb Backpack and has a 20 liter capacity. However the 7.9" depth might make them ideal for carrying Pro bodies inside a larger insert or something like a Vanguard Divider Bag 40 Camera Bag. The Vanguard bag is a small suitcase like bag with padded dividers. The 11" width of the Vanguard bag and the 11" width of the backpack pannier may prevent this from becoming a solution. Again, I am searching around for a store with these in stock to determine if the Vanguard bags will fit.

I recommend two bags. First, use a handlebar bag for your photographic gear. You can either use the foam inserts as suggested above or I believe there are some dedicated camera bags for the front of your bike. This gives you easy access to your camera but it also ensures that your camera equipment is securely held.

For your laptop, etc. I recommend a pannier with a dedicated laptop sleeve that hangs internally i.e. not sitting on the bottom of the bag. One thing I would caution you about are panniers that are essentially one big bag, and you throw everything in. It's useful for groceries, but having various pockets is very helpful. Many manufacturers now are making bags that are convertible into messenger bags or backpacks and that have multiple compartments so you can stash things securely.

I've tried numerous setups over the years and am usually out on the road several times a week, weather permitting. I currently use Caradice Super C panniers in combination with Vanguard soft cases. I remove the Vanguard cases individually from the panniers to access my equipment. I carry multiple Canon bodies (7D II and 5D III), a 100-400mm zoom, a 100mm f/2.8L IS macro, 16-24mm f/4, 24-70mm f/4, 1.4x and 2x Sigma teleconverters, LED ringlight, filters, and cleaning supplies. I'm carrying a Feisol CT-3472 tripod (large study carbon fiber tripod) on the handlebars using a Relevate Designs Sweet Roll (large). I sometimes carry a Sigma 150-600mm inside a Lowepro pack straddled over the top of my panniers and attached to the rear rack with bungie cords. I carry water, camping supplies, clothing, other stuff and several tripod heads in a Burley Nomad trailer. I shoot both still and video with my DSLRs. I sometimes carry audio equipment (field recorder, headphones, cables and microphones) in the trailer. I carry lightweight tarps in the Caradice side pockets to cover both the bike and trailer if it suddenly rains (trailer is pretty water tight but the Caradice panniers are not). Definitely interested in what others use.

Not the answer you're looking for? Browse other questions tagged rack panniers bags or ask your own question.