Lock nuts on new hubs seem strangely tight, but can't seem to loosen them. Any advice?

As part of a new build I'm working on, I just had some wheels built up. The hubs are large flanged Miche Primatos with a double-sided fixed wheel.

The rear wheel, straight out the box, seemed weirdly stiff — to the extent that I could barely move it at all, let alone for it to spin freely — so I gave the workshop a call for advice. They suggested the lock nuts were probably just overtightened, and that backing them off a bit would sort it out.

The Miche hubs have sealed bearings, and each side is held in place by both an outer and an inner lock nut. I tried to loosen the outer nuts a bit, but they wouldn't budge. I had to put in all my effort, wrenching in reverse directions on either side of the hub, to get them to loosen even a little, and it would only be in a quick, jerky motion, not smoothly unscrewing. Rather than gradually getting easier as I backed the nut down the axle's thread, it was still just as stiff as when I started. I'd managed to loosen the outer nut by a few millimetres, as shown below, but it was still really stiff (not the hub, but rather the nut on the axle). The force required was such that I quit until seeking further advice; I don't want to do something silly like strip the threads on my axle. 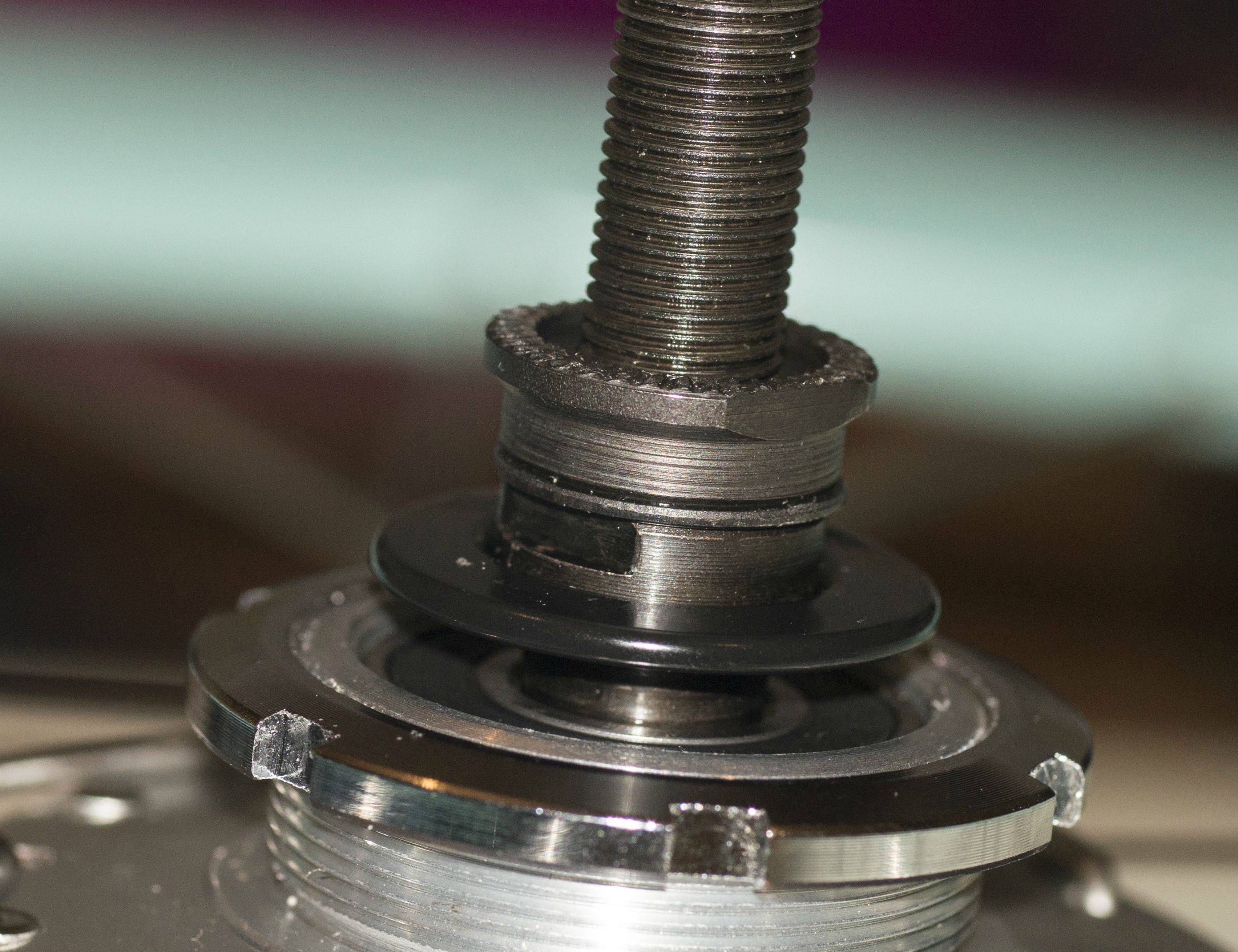 Also, you'll notice in the image that the outer nut is still tight against the inner nut and dust cap. These are three separate pieces, that should have to be removed individually. But here it is as though they've been forged out of the same piece of metal. I cannot loosen the outer nut without the inner one coming with it.

If anyone could help diagnose what's going on here, I'd really appreciate the help. Is it at all possible that the hub is in some way fault? Could the axle have damaged threads?

Those counterlocked axle nuts are binding together more tightly than the threads are on each individual nut, and thus staying counterlocked against one another. Usually this isn't the case and when you put a wrench on the outside nut on either side of the hub, one of the outer nuts will break free. As you're seeing now, not always the case.

You need a box wrench and a cone wrench (or two cone wrenches) to break the inside and outside axle nuts on one side free from each other. Then get the bearings properly preloaded and counterlock them again. This process can be tricky as the preload on the bearings will change as you counterlock the two nuts back together. It usually takes a few tries to get the preload set right and the nuts counterlocked firmly. Too tight? back them both off 1/8 to 1/4 of a turn and try again. Too loose? Do just the opposite.

Not the answer you're looking for? Browse other questions tagged wheels hub axle or ask your own question.

4
Which direction should axle lock nuts face?
3
Stuck lock-nut on one side of the axle, can't push the axle out from the other side

6
Why are axle cone nuts on the left side of a bike not reverse threaded?
12
Do I require a washer/spacer/shim between a hub's cone nut and lock nut?
9
Servicing a Vuelta XRP Disc Hub
4
Proper lateral rear hub position (with spacers)
3
Stuck lock-nut on one side of the axle, can't push the axle out from the other side
5
Uneven friction in front hub after rebuild
1
Play between axle and bearing inner ring
1
What is the difference between hub-cone type rear hubs?
2
Axle is too short
3
Hub bearing preload approaches