How to reassemble a Shimano Alivio Shifter

I need a diagram on how to reassemble a Shimano Alivio Shifter. I just can't seem to get it right. I even disassembled the other shifter to see how it all fits together and now I can't get it assembled again either! A diagram or instruction manual will help!

It just so happens I had one of these land in my garage for a fixup today. So I've taken some photos of how it went.

tl;dr Answer Root cause lubrication. The pawl for up-shifting wasn't engaging the teeth.

This is for a Right hand shifter, for the REAR mech. I assume a Left shifter for the FRONT mech is similar inside, with fewer teeth.

By Murphy's Law I had to do the left hand shifter too the next day. Process was identical but mirrored left for right. There are only three positions on the left shifter, so far fewer teeth on the internal cogs.

No pics of the left shifter because someone else had used adhesive glues to stick several broken pieces back together.

The underlying problem was identical - a pawl was stuck in a position where it could not contact a tooth. Turps and lube was the fix.

One thing that messes me up is trying to count the effective positions, in that you don't count Clicks or Presses of lever. Instead, the first position is #1 and one click takes you to position 2 etc. So a three position left shifter has TWO clicks. I spent an embarassingly long time trying to find the third click. 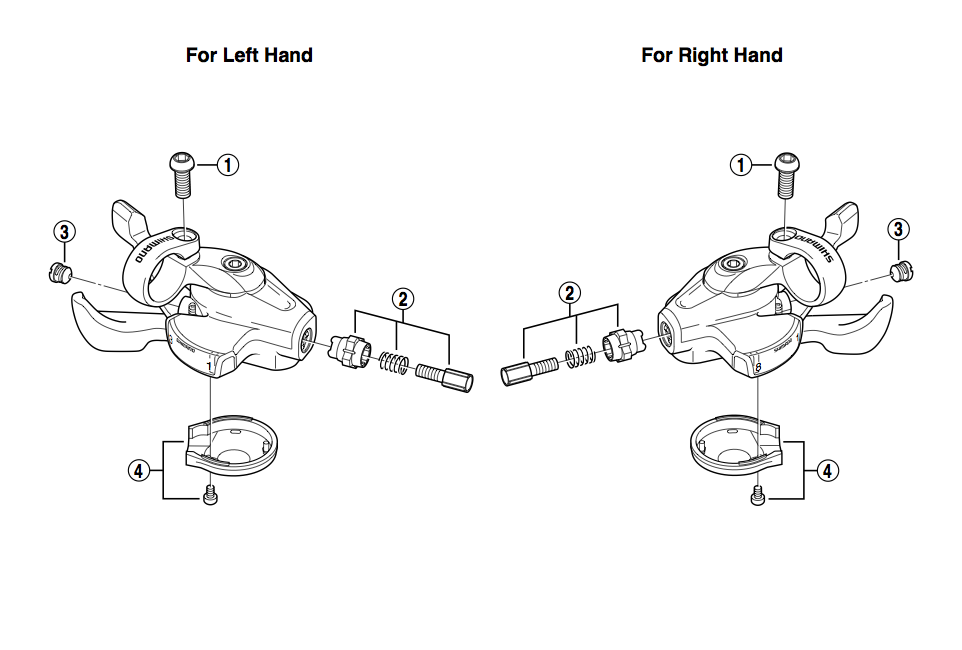 Late answer, but I opened a Shimano IGH shifter to change the inner cable.

So I had to use a piece of sewing cotton looped through some part of the indicator gauge so that it would mesh correctly while I lowered the top housing on the base.

The details escape me now, but the gears and levers inside the unit were all super lightweight plastic , and using the cotton as a lanyard let me position a pin exactly in the receiver, then drop one end of the cotton and pull it out the other side.

Aside - you change the inner cable by unscrewing a large plastic grub screw on the side opposite where the cable enters the shifter. Marked as #3 in Yivi's excellent diagram.