I'm in a position where bringing my bike into the apartment is my best option at the moment. However, it is possible for metal edges of the bike pedals to catch the wooden edges of doorways.

To prevent damage, I'm looking for some sort of rubber bumper to put on the bike pedals, or else find bike pedals with rubberised outer surfaces to avoid damaging things they bump into.

Has anyone found such pedals or bumpers?

A lot of platform pedals are made of plastics which won't scratch things, like this one. They're pretty much available everywhere for about 10 dollars, though a clear one will pretty much just transfer dirt if it hits. You can also put some duct tape or electrical tape or something over the edges of the pedal (this should essentially be free). Note that certain tapes may leave some residue if they do rub. There are also slightly odd platform pedals which seem to be promising like the Ergon PC2, though I haven't used one .

Another option is folding pedals, such as this one, by Sunlite (these are the cheapest ones available AFAIK, at around 20 dollars). Typically, you push/pull some tabs, pull the pedal out a bit and can fold the pedal up. These are often used for folding bicycles, and should essentially eliminate the problem (provided you buy a quality folding pedal, as if somethings going to go on the pedal, it will be the folding mechanism).

Yet another option is to use a small clipless pedal, such as the Crank Brothers Eggbeaters (the cheapest clipless pedals are around 50 dollars). They're small but you'll need to get special shoes - some SPD shoes (probably another 75 dollars or so) are okay for walking in. Other pedals have a bit of platform, which you may or may not like, such as the Crank Brothers Candy. Of course, if the platform is too big, it doesn't really cure the problem.

A short length of foam pipe insulation should do the job. It's cheap, will fit into your pocket, and you can get it at any hardware store or plumbing supply shop. You could also slide it onto your top, down, or seat tube for storage. 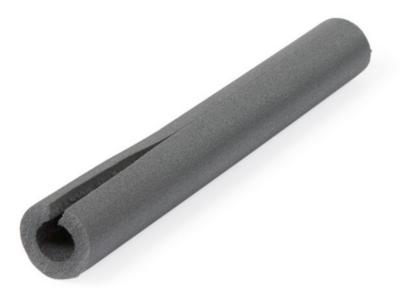 Choose the size based on the type of pedals you use. Platform pedals will require a larger diameter and clipless pedals a smaller diameter. You want it big enough so you can easily slide it over the pedal but small enough that it stays put.

In short. Yes they do. Finding them may be hard.

See the end of this answer

You could try a few coats of plasti-dip on metal pedals. If you degrease the metal properly before you apply it it sticks really well and provides a grippy rubbery plastic surface, much thicker than paint. I've used it to stop metal clamps scratching campervan bodywork and improve grip.

It might even work on hard plastic pedals (which are harder than typical household paint or plaster).

I'm adding an answer of my own (but not accepting it), which is the method I'm using as a stop-gap measure in addition to Batman's duct tape.

I have cut out cardboard and glued and taped it into a rectangular shape just wide and high enough to slide over the pedal, with a 1 centimetre overhang.

A cardboard rectangular tube folds flat for stashing, similar to how Carey Gregory's foam tube can be stashed on the frame. However, cardboard will not survive heavy rain.

Still, cardboard is readily available to me and does the job.

There is a product called “Pedal Sock.” It will help to prevent / reduce the damages that your bicycle pedals can cause, when transporting or storing you bike. I have even seen people use then when riding their bikes. The material that it is made of is flexible with some shock absorbing properties. They seem simply to use and can withstand a good deal of punishment; which make them durable. For the purpose they serve and there durability, they are not expensive. I first found them surfing the internet (pedalsock.com), since then I have seen them in use.

16
Is there any advantage to using pedal straps over clipless pedals?
9
Clicking sound coming from pedals/pedal spindle/crank
27
How much of a difference do Toe Pedal Clips make in comparison to Platform Pedals?
3
Do clipless pedals that can have toeclips exist?
5
How do you spot the left side pedal on egg beater pedals?
4
Does an SPD-SL AND SPD compatible pedal/shoe exist?
3
Bike Pedal Falling Off
4
Bike creaking (possibly pedals?)
6
Can pedal-based power meters be used as flat pedals?