This is a bit weird question. I bought a Specialized Hardrock XC used bike cheaply on e-bay. It had no front brake and the rear v-brake had different arms and was very dodgy. I thought I would able to fix what needs to be fixed - essentially to replace brakes shifters and cables. It would be fine, but for the unexpected. 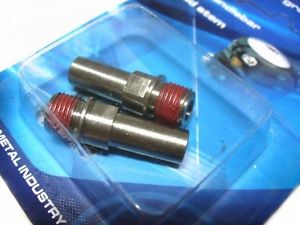 Studs that can be e-bay ordered from Taiwan)

The frame is good apart from the left rear V-brake stud (the cylinder piece on which brake is put on) - also called brake pivot and cantilever stud. It is protruding from frame by about 2 mm more than the right, also has a thicker ring at its base - so looks like as if it had not been screwed in all the way. If you look at the photo it looks like the disc shaped wider part has remained above the frame. Moreover - the part which the brake fits on that should be round (it is like a cylinder in the middle with flat sides used to screw studs into the corresponding frame threads) apparently has become oval - the left side brake does not go down all the way to the frame as the right side brake does and the fixator pin inserts into its hole by about 1 mm max. This is the problem I was trying to solve - if the brake would fit, I would not bother with the thing that one sud protrudes by 2 mm more.

The trouble I have is this - how do I replace the stud or what should I do. I have heard that one way would be to try to screw it more in - unlikely as the previous owner would have done it. The other way - to try to screw it out. After I could not fir the brake I tried to use mole grip wrench and understood it would be very difficult - tried just twice and stopped not to break the thing further. Another option maybe would be to file down the existing stud so that the brake fits on safely.

And how do I even know that the thread in studs from Taiwan would even fit the thread, should I be able to remove the stud? So I am worried to mess up the frame.

The brake I am trying to put on is Shimano Deore M590.

What do more experienced people think - how to sort this out? I am only a technically inclined noob in bicycling and would be very grateful for advice.

Thanks for the help. Finally what I needed to do was to screw the stud further in. The previous owner apparently had screwed it 2 mm out because in their wisdom they put a different V brake lever on the left hand side - which fitted better if the stud was protruding. Actually a guy from the local bike workshop did the screwing part for me, since I was afraid that I might damage the frame if I do it incorrectly.

Front brake studs were totally absent from the fork, so I got 10 mm diameter studs - similar to ones in the picture above from e-bay for 8 £. Happily bicycling now. :) - there is something very satisfying about getting a used bike with a good frame and fixing it up, learning as you go.

3
Specialized Hardrock rear hanger
1
Safe to shorten a dual-pivot caliper mounting nut?
2
My bike brakes are lethal, help!
2
19 inch frame MTB Issues for a guy standing 6 feet 3 inches tall
4
Can I upgrade brakes despite interface difference
5
Shimano BR-T4000 not compatible with frame pivot stud
7
Hydraulic brake lever doesn't return after being released, dependent on weather
5
Mechanical Shimano Deore Disk Brake - How to fix lack of bite/grip
1
Purpose of this screw on my mountain bike's (BCA 29SC) rear dropout/derailleur and how to fix?
3
Cantilever brake is missing its mounting screws and washers, how do I replace them?