Folding bike for commuting and touring

When looking for a compact bike for storage and carrying reasons, a folding bike seems a great deal. But how do folding bikes perform for trips longer than 20km ?

I'm looking for a bike I would use for commuting with important traffic and frequent stops (Paris), together with touring (Europe). The bike has to be compact enough to be stored in a small flat and to be taken in trains and carried inside train stations.
Brompton bikes are known to be stable and robust. But due to the position of the rider and the size of the wheels, these folding bikes are never used for long trips (more often 30km, but also few 150km trips travelling between cities). Does it exists any kind of hybrid bikes which would combine both compactness and comfort with long distance ?

I've tried the Grasshopper FX a foldable recumbent bike, which doesn't seem to be great for city commuting. How do 700c foldable bikes perform ?

I don't know about France, but in the UK, not all trains allow large wheeled folders. If they do, something like a Dahon Espresso is a quick fold, but not very compact (folding handlebars help, and newer models have them as standard). The Dahon Cadenza is slightly less bulky, but slower to fold.

The Jetstream is 20" wheels, doesn't fold as small as some other small wheel Dahons, but would cope with some sorts of touring better because of the suspension compensating for small wheels to some extent.

If you ever want to take the bike on a bus, you will almost certainly need a small wheel folder.

Another possibility is a Riese und Müller Birdy. They do get seriously expensive, but fold nearly as small as a Brompton (compared with a large wheeled folder; if your main use is commuting with public transport, the Brompton fold is enough smaller and neater to matter). (There is now longer a Birdy model specifically named "Tour", but they are still used for touring.) 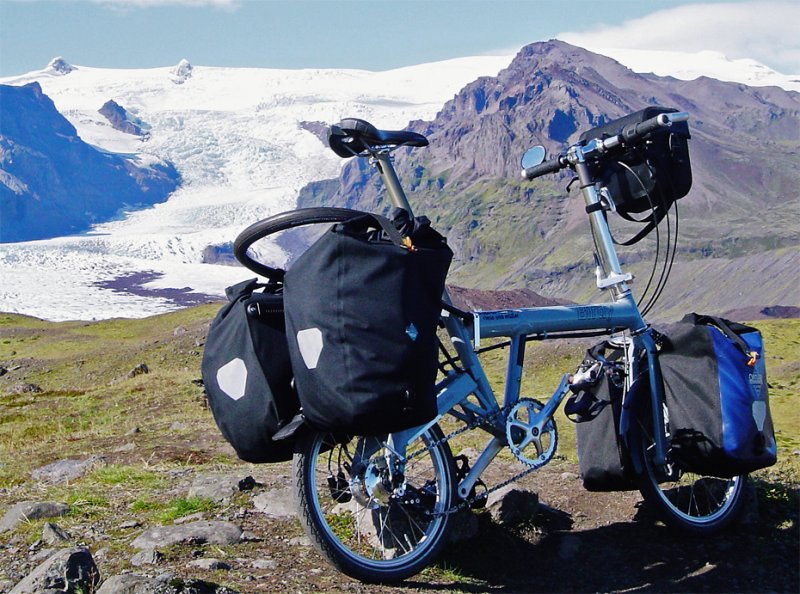 I found an old Dahon Boardwalk. I seriously converted it for touring (love the upright position) by making my own front rack. I added a rear rack and have changed gearing front and back to run nearly same size cog.

Bike has the ability to carry me and all gear(I weigh 90 kg) and has serious climbing capabilities.

I am in no hurry, and I'm a bit of a shutter bug so I pull a single wheel trailer too. The trailer has a solar panel to charge camera, video camera, lights, phone, bike computer, tablet etc.

I dont subscribe to the usual hype and marketing on bikes because I have done many kilometres on this rig and will do many more. It has proved itself. Love the fact that its steel so easy to repair if needed.

Not the answer you're looking for? Browse other questions tagged commuting-bike folding-bicycle touring-bikes or ask your own question.

1
Help to choose the right bike multipurpose bike
2
What bicycle to buy for commuting to work and for leisure (Aberdeen)
2
Chainring replacement for folding bike
10
Internally-geared hub and chain case: running away from maintenance chores and grit damage
2
I think I bought the wrong bike
11
Good type of bike to get for commuting (thinking of road v touring)
1
Bike transport while touring - would a folding bike be better?
14
Why aren't 16" wheel city bikes more common?