In some areas of the world, cars are allowed to use snow chains (or cables) in order to increase traction on ice and snow. This is slightly complicated on bicycles, but has been done. The main problems seem to be the chain being fixed to the tire while avoiding the rims (for brakes; presumably this can be relaxed for bikes with disc brakes to grab around the rims).

As an alternative to installing tire chains, various manufacturers have been selling snow socks (wraps) for car tires, which are temporary stretchable covers for your tires designed to increase traction in winter driving conditions without having to install chains or specific winter tires. While I haven't used them, they seem to be helpful for occasional cases where all season tires are not comfortably enough. It seems like some of them work on changing texture due to water absorption due to tire heating (which I don't think will happen on a bicycle, but depending on absorption rate, could be pre-treated with warm water before riding), while others start textured.

I realize there are two issues here - snow and ice, which are related but somewhat distinct due to the types of snow and ice, so characterizations in both cases would be useful. Snow socks are useful for on-road use, so lets restrict the answers to the case for on-road use.

This question is primarily of theoretical interest, given the installation times for snow chains being longer than a tire swap, but snow socks should be quicker if they can be fastened to the tire around the rim as in the disc brake case.

It's kind of goofy and requires a bit of time to do, but you can zip tie your wheels to make snow wheels. While they aren't reusable if you remove them, it's a fairly cheap method.

And then I went and found these too. They are supposed to work with all brake systems.

As far as the socks go, I couldn't find anything smaller than automotive tires. However, I've got an idea that might work: place a larger volume tire over the current tire. You could get one with a lot more tread/studded etc. Another alternative would be sewing some tubes together, but I don't think tube material is going to do anything.

Last resort would be to buy an automotive wheel snow sock and cut it down to bicycle sized dimensions. Probably a lot of work, but until they make a specialized one that's about all you can do.

You can avoid this problem altogether with studded tires 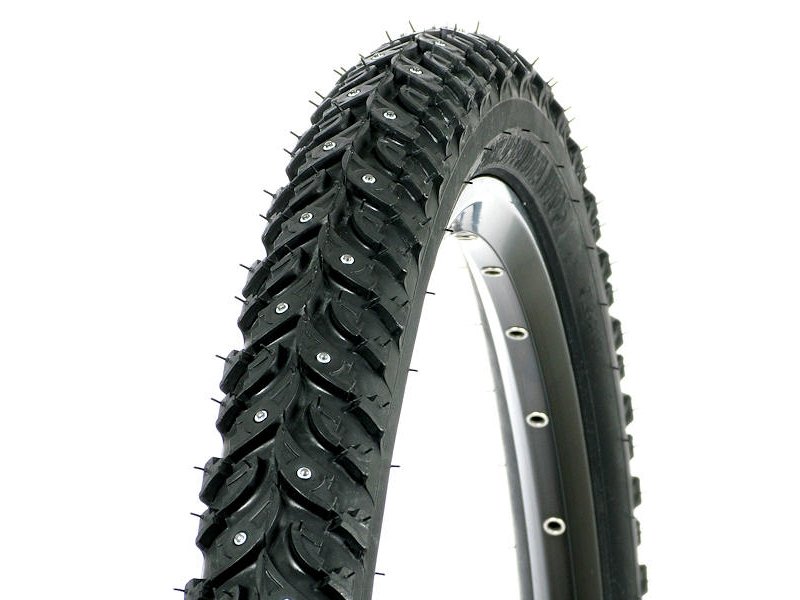 The pattern is deep enough so that it grabs quite well on the snow, and the studs give you a very good grip on ice and hard snow. On uniformly flat ice, the grip is almost as good as asphalt.

If the tires are good, you can wear them for all winter season, even if there is no ice. The studs are not very prominent, so the whole tire is still in contact with the road. This solves the problem of having to adapt to weather conditions. At my local bike store they assured me they would last for at least 5 years.

Source: I have tires like the one in the image in the Swedish winter.

PS: here, I have never seen cars them using chains or socks, they have winter tires instead, pretty much a car version of the image. Not all have studs, though.

When I lived in Ithaca New York, I used tire chains for my RockHopper mountain bike. It made going down the steep slope of Buffalo Street in the dead of winter a bit less terrifying. 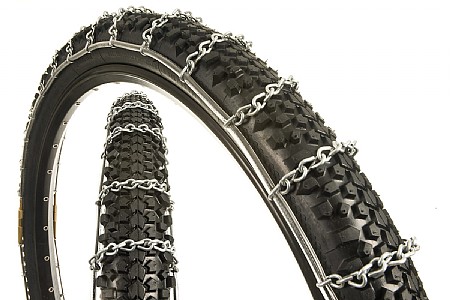 This brand is called SlipNot but there are others on the market as well. The advantage of chains is that they can be taken off in the Spring. The disadvantage is that you have to make sure that your brake/fork clearance is ok.

Not the answer you're looking for? Browse other questions tagged winter snow ice or ask your own question.

8
How does the length of the studs on winter tires affect traction on ice?
2
Good tires for road riding in winter weather?
5
When to change winter tires for bicycles
4
Safe to ride with Kenda 27 x 1/38 inch studded tires in snow/ice?
5
How is fat bike traction on icy roads compared to a mountain bike?
16
Bike choice for snow commuting
4
Aluminium rigid fork for winter
4
Tire selection for winter trike riding?
0
Why aren't winter bicycles camping events common as the motorcycles one?
6
Can a fatbike cross frozen car tire ruts without slipping?