Framebag vs Panniers - Pros and Cons

What are the benefits of a frame-bag over panniers? I need one for a bike-packing trip (any good value recomendations welcome). I've used panniers in the past but I've seen a lot of framebags about. 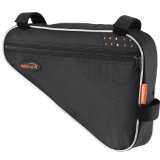 If the image above is correct, the frame-bag is great if all you're carrying is a credit card and a puncture repair kit. It's light, cheap, unobtrusive and doesn't add much air resistance. But if you're carrying even a rain jacket, it'll be hard to find a frame bag big enough. The frame-bag is not waterproof either, so it would be best not to carry a phone or cash in it (unless your currency is plastic).

Even if you found a big frame bag, the capacity is limited by your frame size and the width you can fit between your knees as you ride. So a triangle perhaps 500mm on a side and 100mm thick (it will overhang the bottom bracket a little, but most cranks allow that). Call it 12 litres. Bigger than a handlebar bag, but not by much. That's enough for a change of clothes and lunch if you choose wisely.

The advantage of panniers is they come in a range of sizes, from much bigger than a frame-bag to really quite large. You can find waterproof panniers as well as back-pack converting ones, front and rear panniers, and multi-compartment panniers. The disadvantages are that they're big, obvious, expensive, heavy and require racks on the bike as well.

People carry ridiculous amounts of gear in, on, and around panniers. I've toured with people who had 80kg/150 litres of stuff on their bikes, and I've toured with four 60 litre panniers on my bike. There are limits to what you can get into panniers, but compared to the 12 litres in a frame bag the real limit is how much weight you can deal with.

Not the answer you're looking for? Browse other questions tagged luggage or ask your own question.

16
Really big panniers and other baggage
4
Carrying a Carradice Camper Longflap when off the bike
2
How to keep my manbag in place
8
Minimum mountain bike trekking/touring equipment
4
What are the advantages of bikepacking bags?
9
How can I make better use of the dead space under my bottle cages?
1
touring weight distribution
2
Front rack symmetry - spacers and handling
7
Options for carrying a smart briefcase on a bike (pannier or otherwise)
1
How can I improve my cable routing