How tight should my front quick release lever be?

I'm referring to my first new bike, with a front wheel quick release lever as shown.

The picture is picked from Internet 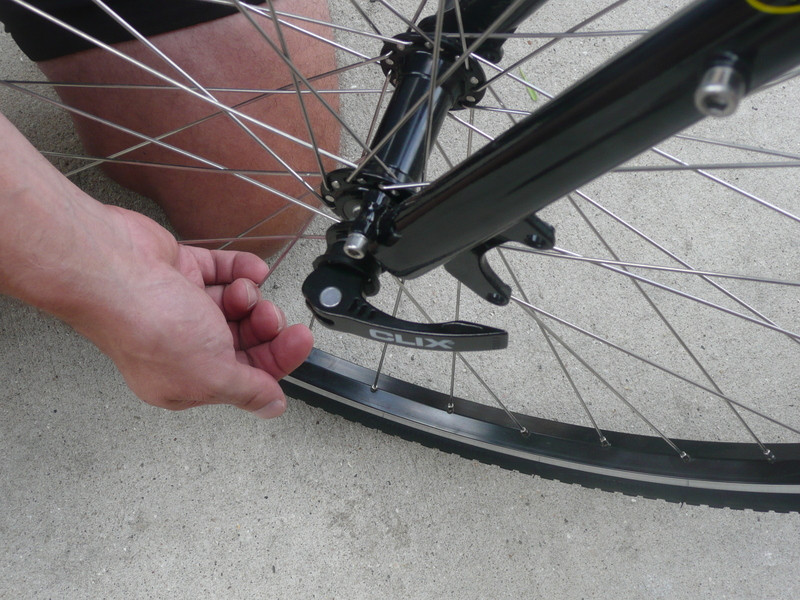 How can I know whether I have locked my front QR lever correctly? Neither too tight nor too loose? When I tried to open it recently it seemed too tight for me as I was not able to open it.

You are correct that those levers are designed to be opened with your bare hands. Unfortunately it's usually easier to push the lever closed than to pull it open, so it's easy to over-tighten it.

Unless you're unusually weak, not being able to open it means it is on too tight. Even if you are somewhat weak, unless you have disk brakes "as tight as you can" should be ok.

Note that if you have disk brakes it is much more important that the quick release be tight. When you use disk brakes the reaction force is pushing the wheel down, out of the fork. It is better to have the QR slightly too tight than slightly too loose with disk brakes.

Also, the QR lever should always point backwards as shown. That makes it less likely to catch on anything and be pulled open (or throw you off the bike).

The link broke, so here's key bits of the article via archive.org and another article that summarises the problem

Disk brakes and quick releases - what you need to know

Yes, that's right - a UK cyclist has recently settled out of court with a fork manufacturer, in what is I believe the first successful case of its kind. There are a few more details in this thread here - the rider himself is hoping to avoid the limelight but thought that others might like to know.

The purpose of these web pages is to explain the danger of using a disk brake with a standard quick-release fastening for a front wheel on a bicycle.

[NB for 'quick release' please read 'conventional axle in slotted dropouts'. A simple nutted axle may be slightly better than a QR in theory, as it can provide a higher clamping force. However I'm not convinced that in practice it is safer, as it will be less obvious if it loosens or slips, and in fact the greater bolt diameter will generate a stronger unscrewing force. The safe alternative is a properly clamped axle combined with fork ends with a blocked exit slot, as shown in the pictures below.]

There are two main aspects to the failure. The disk brake generates a massive force largely downwards in the direction of the open fork ends. The friction of a quick release skewer is often not sufficient to stop the axle slipping down in the dropout slot. This is explained in more detail here, The QR is initially restrained by the retention lip on the fork (assuming it is present), however over time the slipping of the quick release leads it to unscrew, which is described here. Once it has unscrewed enough, it can be forced over the retention lip and the rider will crash. Below the analysis, we have a section of anecdotal and experimental support, and I've put the small number of manufacturers' comments on a separate page.

Depends on your forks to a degree - if you don't have lawyer lips on your forks you'll probably want to go a smidge tighter than you otherwise might - I've had loosely closed QR levers work completely loose over the course of a ride. If you have difficulty closing it then it's almost certainly too tight - opening it will be ever harder.

For rear QRs if you have horizontal dropouts you'll want to tighten the QR quite tightly - it can be pretty hard to get them tight enough to prevent wheel slippage if you have QRs with an external cam or chrome plated dropouts.

Don't over do it. If you over tighted your front or back QR, you can squeeze the bearings too much and cause damage -- unless you left your bearing adjustment slightly loose to compensate. You can experiment by using your QR in the wheel with washers on each end, instead of inside the fork of the bike. On the other hand, you don't want front or rear too loose; I was attacked by dogs one time and when I stood up to pedal, I locked the rear tire against the chain stay. My normal position of the clamp is 90 degrees from the bike when it gets snug - then squeeze all the way in. It should be enough to leave an impression in your hand but not enough to damage your bearings.

The quick release should start to get tough to push when it is half way between open and closed. Best way is to make sure the lever is closing towards the back of the bike so if it catches on a stick it will not open when you are riding.

Not the answer you're looking for? Browse other questions tagged wheels quick-release or ask your own question.

14
Is it safe to remove "lawyer tabs" on a carbon fork?
0
I removed the drop-out adjusters... Do I need to adjust my derailleur or add chain or both?

0
Giant Atx MTB rear wheel quick release not opening
1
Shifting problems after removing and replacing rear wheel
2
How do you know if your wheel is correctly centered?
0
Can I fix or replace the quick release lever on my thru axle?
1
Quick release and tires moving in the frame?
2
Converting quick release to solid axle
3
Can I replace a quick release skewer by something that needs a wrench to open?
1
Front wheel twist and move in dropouts when braking or on aggressive turns
4
Can QR cause Brinelling in hub bearing?