Bicycle Storage: Does Kvartal method need studs (or other suggestions)?

Does anyone know how http://www.apartmenttherapy.com/ikea-kvartal-easy-unobtrusive-137753 was done? Do I need to get them into studs?

Here's some photos of my laundry room, I thought it would fit length wise but because of the water heater it doesn't. I'm trying to figure out another solution. 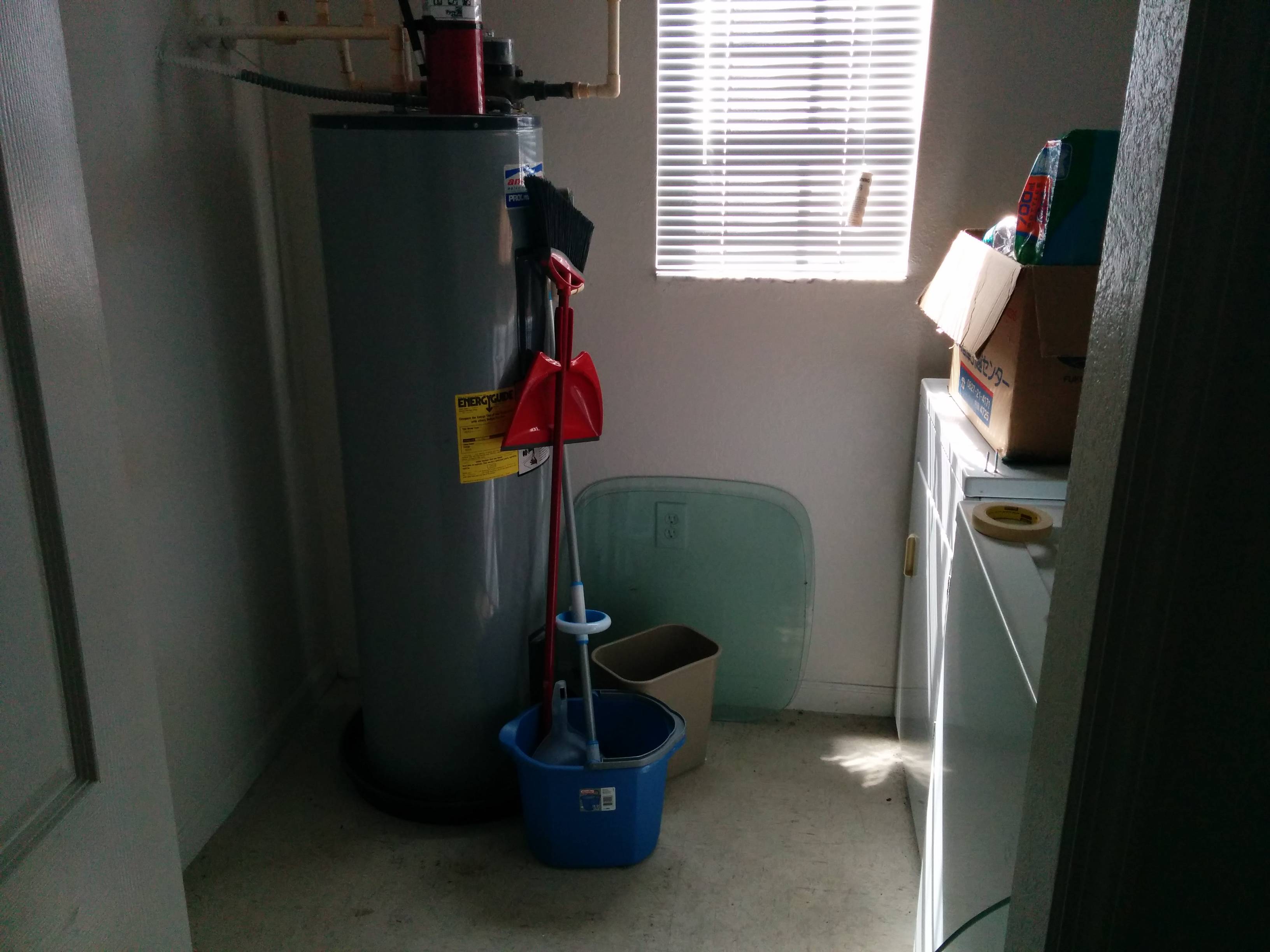 This is the wall I was hoping it would fit across: 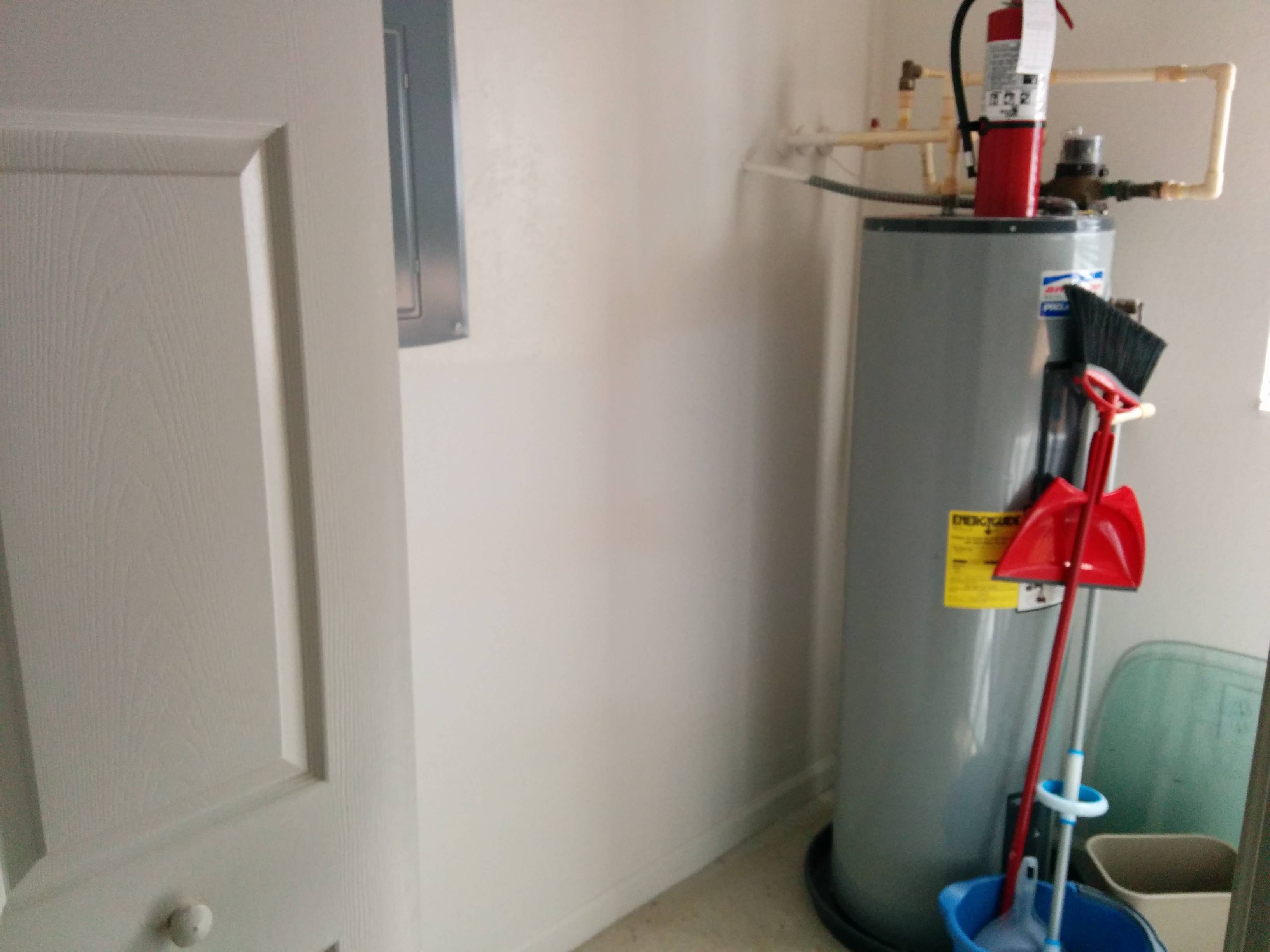 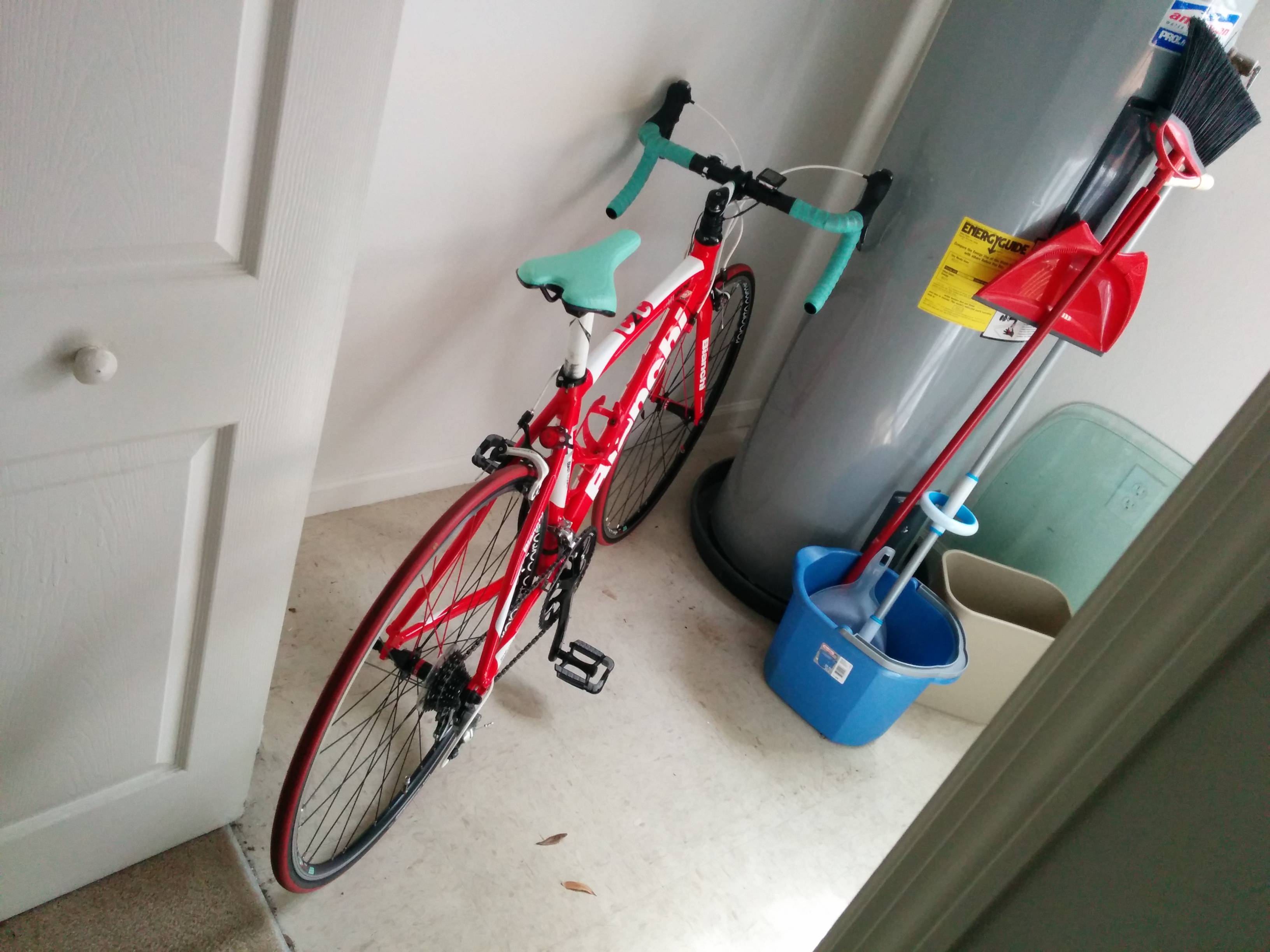 Here's the wall I think I think the Kvartal method or something similar could work on. Without someone to take the photo for me I couldn't get one, but if I bring the bike up so the handlebars and seat are against this little corner piece then it does fit before the water heater (similar to the kvartal link). I'm just concerned because the stud on the inner side is too close to the corner for the handlebars so I wouldn't be able to drill into a stud. 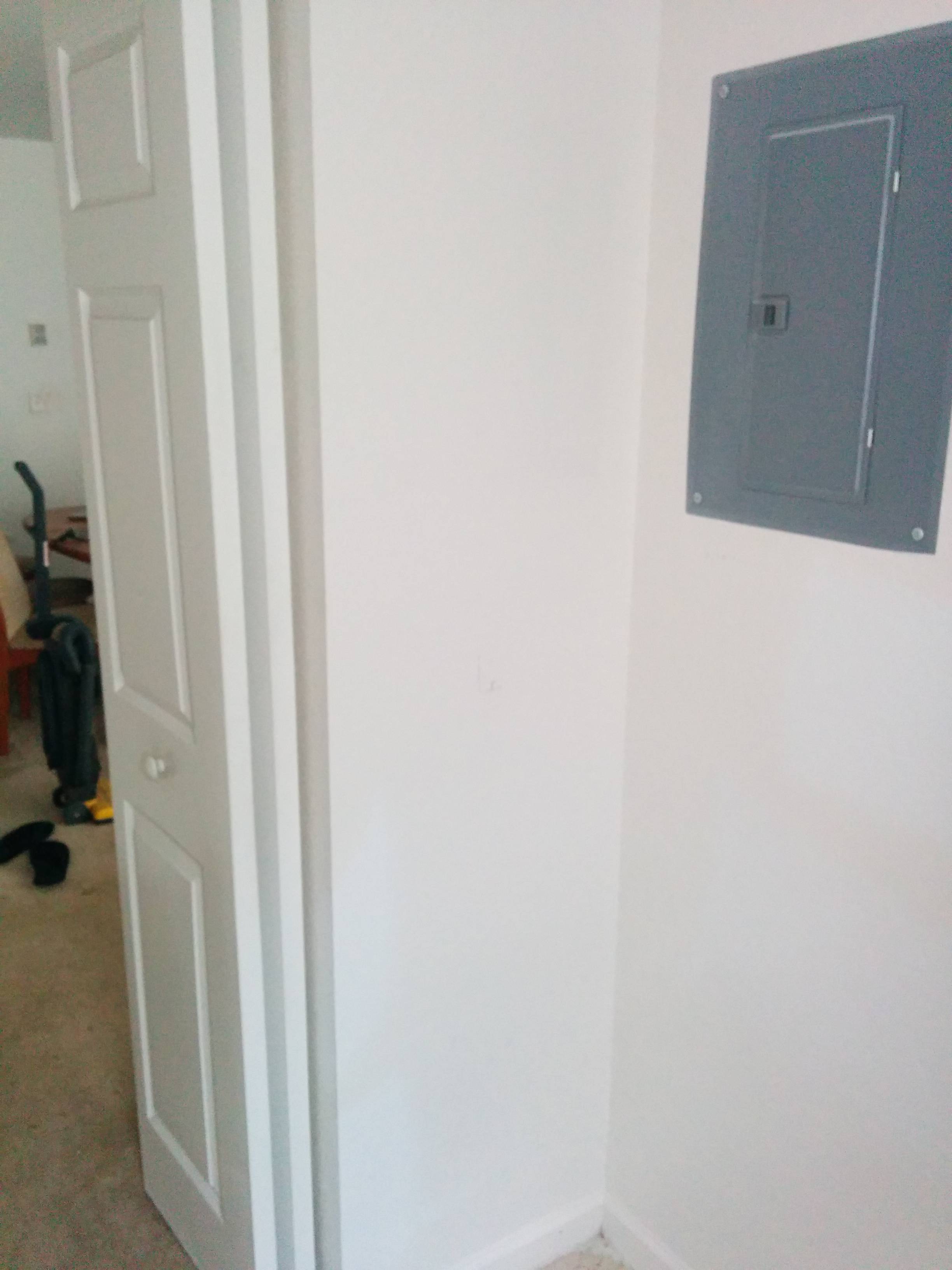 Think doing it without being in studs will work? Or anyone have another idea that might work?

This is what I was going to try using instead of those actual Ikea pieces - Blue Hawk Large Storage Hanger from Lowes: 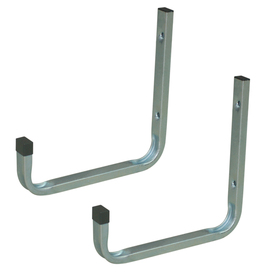 To answer the Kvartal question: no, but in practice if you don't have studs it will be fragile and over time you're likely to pull the screws loose or right out of the wall. If the rack doesn't match up with your studs use a backing board attached to studs and you'll be fine - even a length of 1x4" timber would probably be enough. Don't use any of the processed woods (particle board, chipboard, MDF) as they're not strong enough.

The easy option is a stand that leans on the wall, since that doesn't require any holes in the wall at all. The disadvantage is that they tend to move around and mark the wall unless you anchor them in place. But that anchor can be quite weak, a drywall anchor will be fine. I haven't seen one designed to hold the bike vertically, but I suspect you could buy one that would be easy enough to modify one to hold the handlebars rather than the top tube (the one shown it looks as though you could bend the bars in so the hooks are closer together). 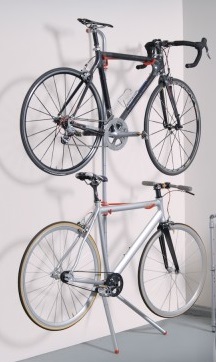 As WTHarper says, if you can find studs but they're not in the right place, the better approach is to attach a solid bit of lumber across the wall, screwed to the studs, then attach the bike rack to that. If the wall is painted I'm am not a fan of the screw-in hooks, inevitably the bike ends up pressing on the wall and marking it. Better to buy a proper suspended rack and hang the bike on that. Or make your own, add a second cross piece lower down to brace on and a couple of timber triangles will work fine.

There are a heap of very pretty DIY solutions here, you could do this one with a couple of bits of 2x4" at each end if you don't want to spend the time on shelves: 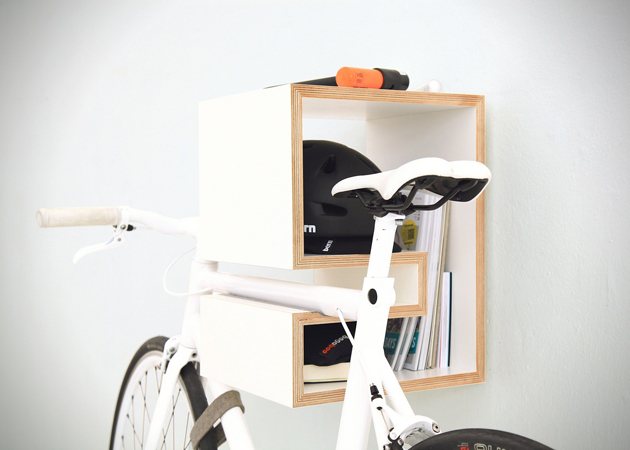 Since you want a vertical stand something like this might work, and could even be arranged so the saddle doesn't (quite) touch the wall. That would make it less likely that you'd mark the wall. (As Daniel says, this is the same idea as the Kvartal holder you're asking about) 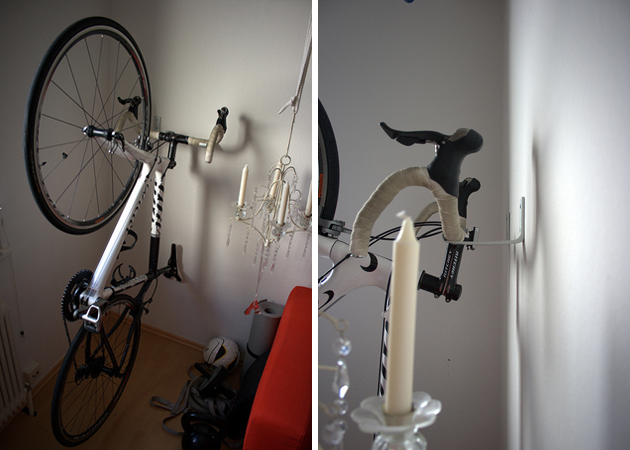 IME drywall screws will not work, drywall just isn't structural. The electrical panel right there also gives me pause, even hooking a cable with a drywall screw could be bad (either by pulling the sharp edge of the screw through the insulation, or just pinching the cable and starting a fire). But mostly, to work well enough to hold even a light bicycle you'd need to carefully arrange them to get the forces right, otherwise you're going to tear the hole or rip one out of the wall. Screwing a board to the studs, then the rack to the board is a better solution.

One last question: does it fit in this way round? I assume you've tried, but if that works it's the least effort option. You might want to tape a bit of card to the wall where the front tyre hits and by the rear axle (and rear tyre) if it does work.

Edit: Another Option: Would this fit on the wall beside the door? If so, then if there is no stud where it needs to be mounted, place a length of wood between the door and corner, screw that into the wall studs and mount the hook anywhere you like. 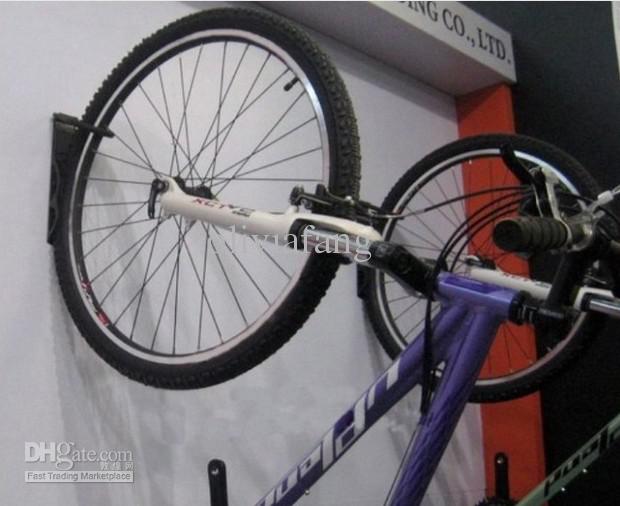 Put your bike in with the rear wheel behind the water heater; it will fit further into the room that way.

Another zero cost option is to take the front wheel off, but that could become a pain if your bike has (as most bikes seem to these days) lawyer lips. (Thanks for the link @Ӎσᶎ).

Another low cost option is to use (sorry, no pictures) the 3M (or similar) adhesive velcro patches that are designed for hanging pictures. I recently installed some in a friend's house that were rated at 10kg (that's more than that carbon bike weighs). They have the advantage of being removable.

But whatever you do, you have to post an answer showing you solution :-)

If it is a typical drywall and wood stud wall, you could do one of two things: 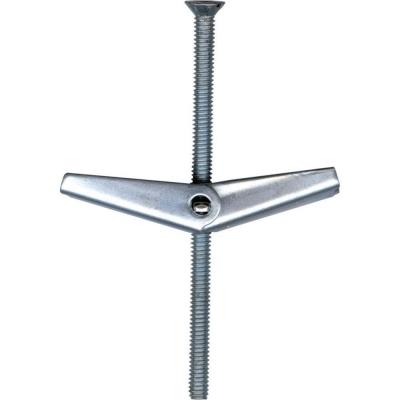 Use two on each bracket, make sure to drill the holes cleanly, and don't over tighten or you will crush the drywall between the bracket and toggle. This would be the cleanest and quickest way to do this, but for heavier bikes you risk pulling a huge chunk of drywall out so I'd recommend method two... (I'd especially avoid using any sort of hollow wall anchors to suspend anything from a ceiling.) ((Also, given the proximity to your breaker panel, I'd avoid drilling large holes willy-nilly unless you're sure the wiring is out of the way. Method two shouldn't cause a problem.))

2) Procure a three foot length of 2"x3" (or other dimensional lumber) and using 4" deck screws secure it across a pair of studs. If you're lucky the studs will be 16" apart right where you need them. In any case, I'd recommend a quality stud finder (again, because of the electrical panel being right there I'd avoid drilling random holes and poking around for studs - in any other room this wouldn't be as big of an issue). This will allow you to fasten either your linked Ikea brackets, or use large plastic coated lag hooks which will cost much less. Be sure to drill pilot holes for the lag hooks so you don't split the wood. 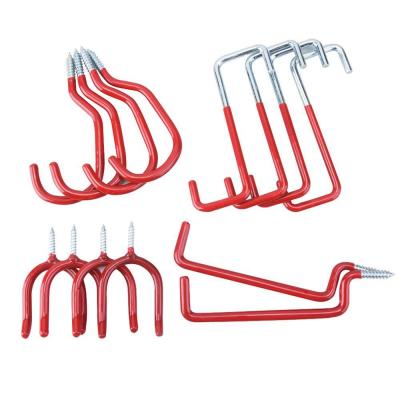 15
Suggestions for outdoor commercial (security/parking) stands
11
Bicycle Storage Indoors
16
I've had a bike in storage for over 10 years. What maintenance does it need?
5
How can I keep spiders and other bugs off my bicycle?
5
Bicycle Storage