If a lane is going to expand should the left lane be taken prior to the expansion?

Pretty sure while making the screenshots I figured it out but I'll ask anyways since I went through the trouble. I don't plan on taking this Left for a long time, if ever (I'll either go Pedestrian to get across here until I'm more confident or take a different route). But this is the most direct route from my place to work.

• 2 lanes getting ready to expand with the turn lanes into shopping centers: 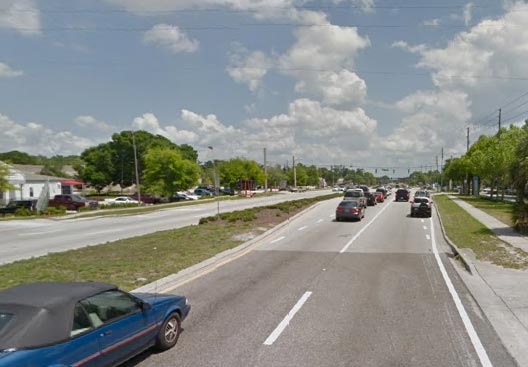 • This is the shopping center intersection. The light further in the distance (500 ft in actuality) is where the intersection is. Cars would typically get in the second lane (not the left into the intersection but the one after that) and then as they cross the intersection get over into the turn lane. You can see this is what the SUV is doing in the picture. I would think this would then be the safest way for cyclists to do it as well but would have to take that lane so cars getting into the left don't cross into me:

• This is the main intersection where I need to make the left. So I need to be in the right left turn lane (2nd lane from left):

• Here is a Satellite view by request. I labelled the left side is the area I'd be approaching from and the top is where I need to get to. 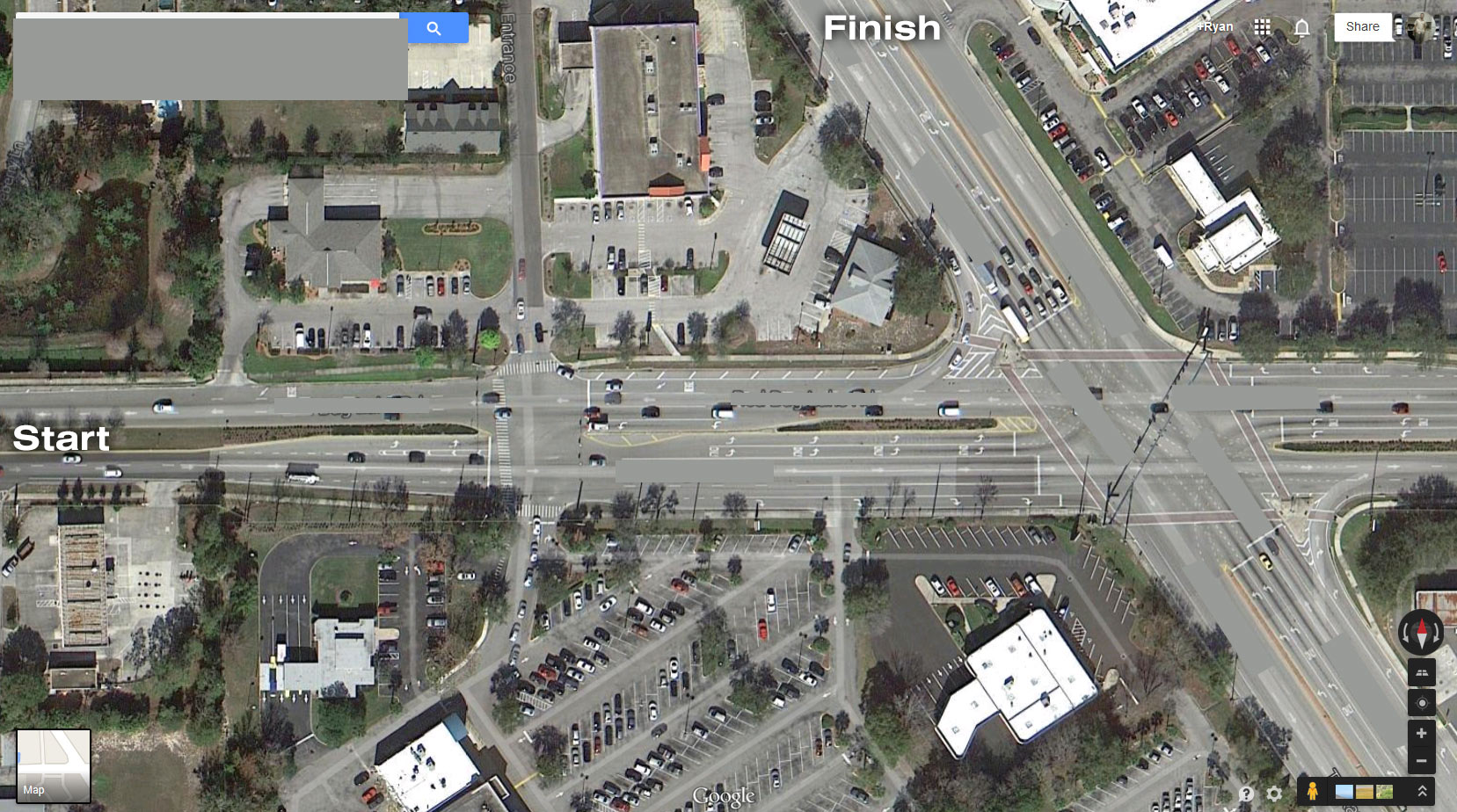 • Finally, its a bit hard to see but this is what it looks like from the light at the shopping center in the morning. You can see there's very little traffic at this hour and I'd actually have to leave 15-20 minutes earlier by bicycle so there would be even less. 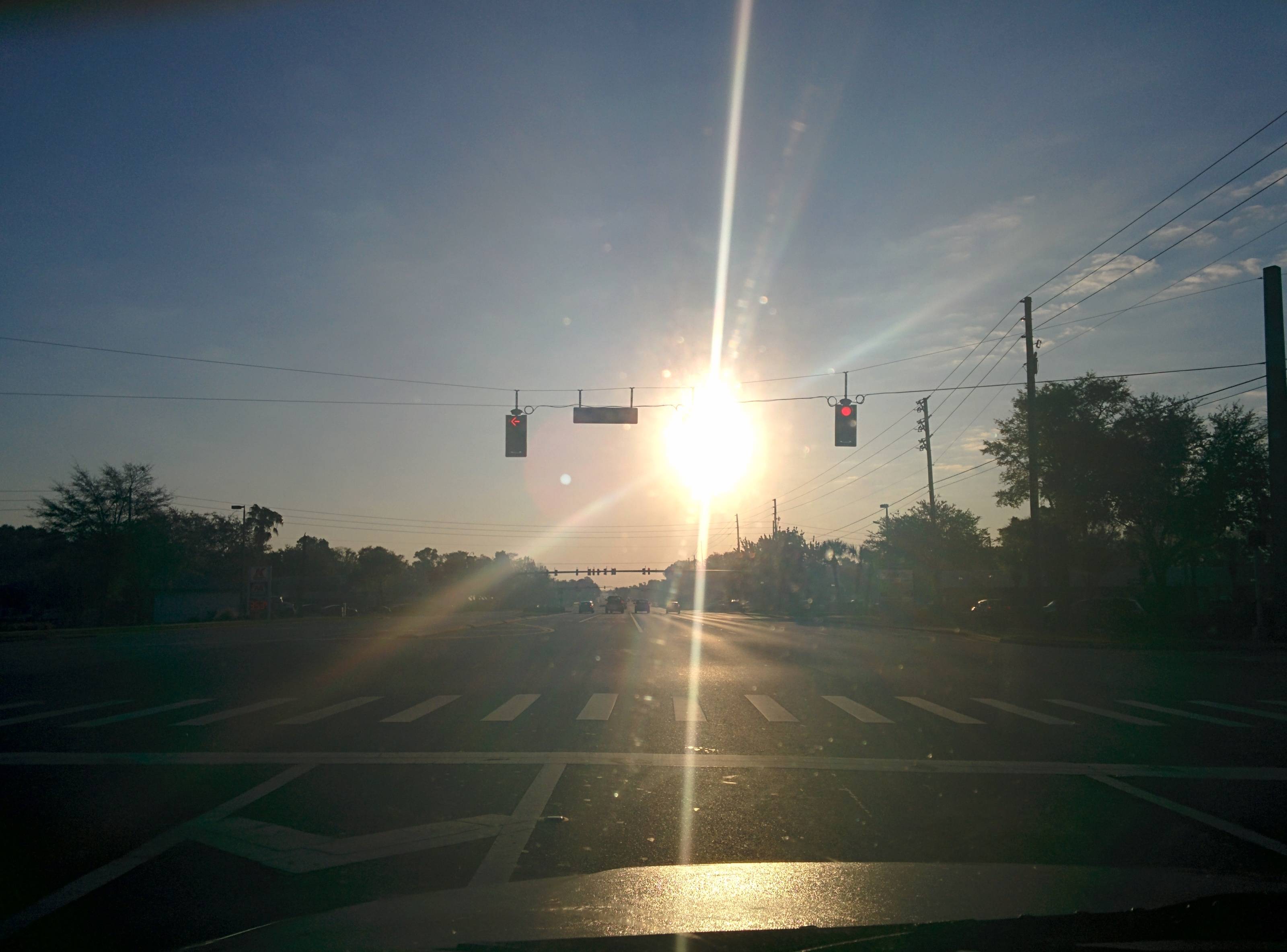 What would be the best way to get in to the left lane? I've seen cyclists there so I know it can be done, just never seen the whole process. I'm thinking after writing this:

Is this how you all would do it?

Generally speaking, at least in Germany a solid line must not be crossed therefore the left turn lane begins where the dashed line between the two initial lanes changes into a solid line. That does also mean that you should be on your target lane before the solid line starts, but it is wise to try to be there not too early – if I should give some reference point I would say you should change somewhere around the last dash, if traffic allows for it.

Finding out if traffic allows for it is a matter of experience and personal readiness to take a risk. But if traffic is so heavy that cars are driving more or less bumper to bumper so that you can't expect to find a reasonable gap between them when you have to change, you better take the detour over the pedestrian crossing.

If you have decided to take the left turn lane, prepare wisely before the turn. About 50 to 100m before the spot where you have to change, start to watch more often the traffic coming from behind to find a suitable gap between the cars. Once you have chosen your gap, occupy it, i.e. do not stick to the edge of the lane you're actually in, but get more to the middle to prevent cars from overtaking you. At this point also start to signal that you want to turn left so that the drivers behind you see your intention and don't get angry at that dumb guy that takes the whole lane because he cannot drive at the side. Then, about at the beginning of the solid line (as mentioned above) switch over to your desired lane, of course after another look over your shoulder to go sure that there is nobody coming fast from behind on your target line.

The most important thing in all that stuff is that whenever you are about to leave your current direction, you do it in a way that makes your intention clear to the drivers around you. So don't just jump into a narrow gap between cars or drive in the middle of the lane without signalling. If you change into the middle of the lane, be brisk and occupy the lane so that it is clear that drivers behind you will not be able to overtake you by just slipping past you without making a wide bow.

Simply: no. Move over only once there is a left turn lane. My preference is to arrive there towards the start of the left turn lane because that’s what other road users are expecting.

There are two parts to the answer. First, the law allows you to use the left turn lane, and in most places requires you to do so if you make that turn. But it also requires that you keep to the right as far as practicable, which means not moving into the left lane in anticipation of the left turn lane.

Second, safety. Your idea of crossing as a pedestrian is the best way if you’re not confident. Better is to ride across the road you’re on, then stop and wait for the lights to change. When they do, start riding when it’s safe, even if you haven’t walked all the way across that road.

When the road is that busy, I’d be looking for gaps in the traffic and trying to move when those occur. A lot depends on your speed relative to the motorists. (edit) So if you can, cross those lanes when the lights are red. Stationary cars rarely hit anyone :)

When there’s a big difference, even experienced cyclists will often fake hook (see below) or pedestrian across. But if you can sprint up to a near-enough speed, or the motorists are kind to cyclists, it’s usually quite feasible to switch lanes over to the turn lane. I find signalling works a lot of the time, and it’s worth trying. Put your arm out, see if someone slows down.

There are a few useful guides on how to do this. The one from the Canadians seems reasonable, and this guidance seems sensible

Note that in some places hook turns are legal. They’re common in Melbourne, Australia and are used in a few cycle-friendly cities around the world. Some people like them as a cycle safety measure, but in my view they’re insanely dangerous unless motorists are expecting them. If someone “runs the orange” they will hit anyone making a hook turn. Motorists do that a lot in some places.

Cars regularly get them wrong in Melbourne, but relatively rarely with fatal consequences, as you often get when a motorist hits a cyclist. You’re better to do a “fake hook” — ride most of the way across with the pedestrians, turn and stop in front of the cars that are about to get a green light. Technically, that’s illegal, but it’s safe and easy.

If I were in your shoes at this intersection, my plan off attack would vary greatly depending on the time of day, the weather conditions, and the specific traffic conditions.

If it were particularly dark and/or rainy, I might cross as a pedestrian even when I'm familiar with the intersection and I have good lighting, just to reduce the risk of losing some skin.

During the day, depending on the speed limit, I would probably use a convenient gap in traffic to take the middle of that lane I need to turn left. Or, I'll often time it so that I can blend in with a line of stopped/slow moving cars and smoothly take the middle of the lane, most of the time the other drivers will get the idea ( you're going to occasionally run into a few jerks no matter what you do, don't take it personally ).

Just take your time and feel it out, you'll get the hang of it.

Judging by the road and the suggested speed limit of 45 mph, I'm betting people are flying down this road at 50+ mph. Unless you are there at a time with virtually no car traffic I would side with safety. Cars doing 45+ mph don't mix well (or at all) with bikes doing 12 mph. This also looks like the south- maybe Florida, and recent bike safety studies showed that the most likely places to get into a car - bike accident were in the south.

I, personally, would stay in the right lane (not the right turn lane) through the intersection. I would stop at the cross walk on the other side of the intersection, move my bike onto the sidewalk, and wait for a light (and pedestrian signal) to cross. At that point you can walk or ride your bike and merge back onto the new street.

Note that judging by the street views you provided the first road is a two lane road with fast moving traffic and no shoulder. I would not normally ever ride on that type of road. You are a slow moving blip forcing the faster moving cars to merge and flow around you. That's a recipe for disaster.

Not the answer you're looking for? Browse other questions tagged safety traffic or ask your own question.

14
How do you decide your route to commute to work?

23
Passing cars on the right, and later merging into their lane
6
Are 2-way bike lanes safe?
31
Intersection detection doesn't notice me, what should I do?
28
What's the safest way to turn left from a right-side bike lane?
10
How do you ride on a road that doesn't have a bicycle lane?
8
Which traffic light do I have to follow?
7
How to cross major road 3 way intersection
12
How close to the kerb should I cycle?
36
Threatening swerving by driver - should I report it? (Canada)
4
How to read the traffic light at this German intersection?