I never thought I'd be on the receiving end of a catastrophic failure, but I am and I am left with some questions. While reading on Wikipedia I noticed it says a con of magnetic trainers is that they are prone to breaking.

During my training this morning, my trainer failed. And it failed hard. The flywheel shattered/exploded with a sound like a gunshot. A piece of it went through the wall behind my bike, while another shot through the front of my computer (playing a great training video of course). No injuries, but I can't believe this happened! I was in highest gear during a short sprint, so the wheel was moving at a pretty good clip, but I would have thought a trainer could handle that!

The trainer is a Minoura Mag Trainer, not sure on the exact model, but it's a little older.

That said, here are my questions:

Here's some pics of the carnage: 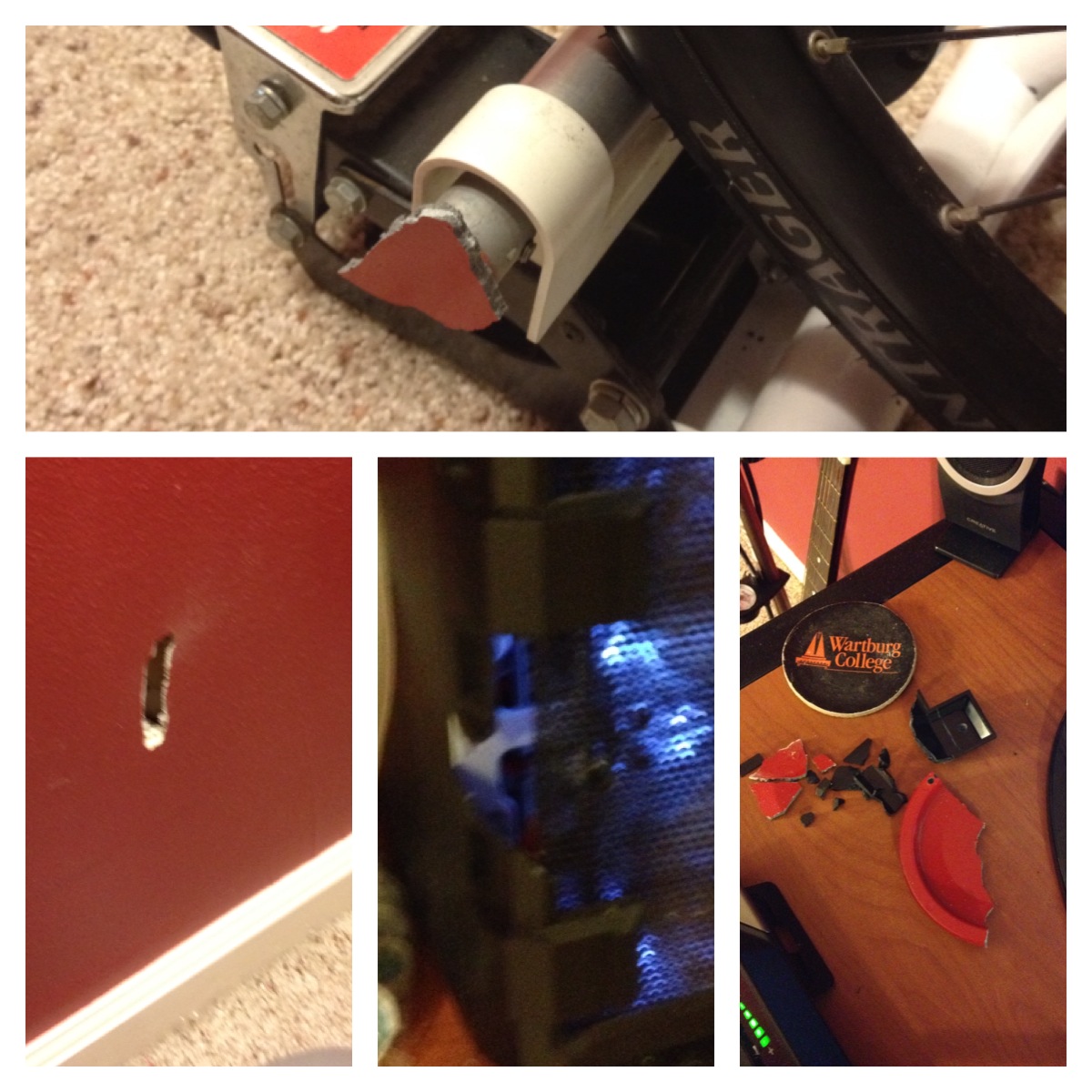 Let's start with some quick maths. I'm guessing the roller has a diameter of 40mm based on the picture. Since it's in contact with the tyre, whatever speed your speedo reads is how fast that roller is going. But it's 40mm in diameter. So, at 72kph / 45mph we have:

The magnetic rotor is bigger, perhaps 100mm diameter, and we want the centripetal acceleration:

The one you care about is overspeed. Either explosion due to too much centripetal acceleration, or an imbalance causing the shaft or mount to break. It looks as though your one failed that way, either through the trainer being knocked at some point or being slightly out of balance when it was made. I've also seen bearings fail through overheating, although that shouldn't happen now because bearings are so much better.

Possibly, and I would hope so. It's been a few years since I broke one, but I've never been a world class cyclist and I have broken two different trainers simply by putting too much power into them (one admittedly at about 1300W). The problem is, to some extent, intractable. People want cheap, light, quiet trainers, but those trainers have to somehow get rid of 500W or more of power for as long as you care to sit on them. Doing that in a light, quiet, cheap container is hard.

Probably. If you bought one with a bigger fan or other dump zone, no. But that would mean the old school "bike wheel with fan blades riveted on" that people hate so much. One alternative that would work is the "pedal powered generator" setup that the green kids are so fond of building, because they usually have bigger flywheels that consequently rotate more slowly (and as I keep saying, the problems go up with the square of the speed, so twice the roller diameter means 1/4 the force). But they're big, heavy and expensive compared to a trainer, and you have to build your own if you want that power output (commercial ones seem to top out at about 200W - I keep looking because I'd like one rated to 500W).

That's up to the manufacturer.

10
Should flywheels on stationary trainers be replaced periodically to avoid catastrophic failures caused by fatigue?