I have a 2012 Spot Acme and it's been great, everything is still smooth and working well into its second winter. However I picked it up to bring it into the office a week ago and noticed grease all over my hands, just like a chain would do. Here's a picture. 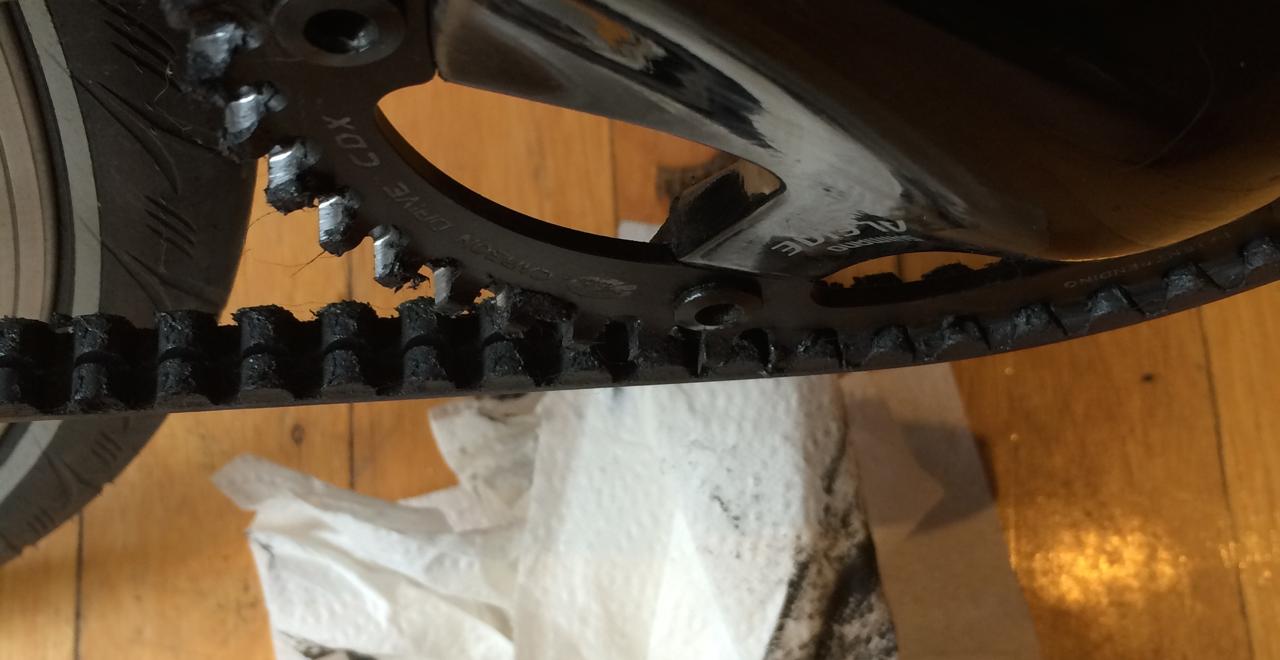 It's like a heavy black graphite-looking grease, definitely oily and not just dirt. There are no signs of leakage from the Alfine SG-700 hub or the bottom bracket. (Hub oil is a much lighter product more like automatic transmission fluid and there is only 25cc of it.) If either the hub or the bracket had leaked all its lubricant I would expect at least some creaking or other noise but it's still all smooth and silent.

I haven't ridden in anything but normal wet weather. If I had gone through a big puddle of grease I would expect to find some on the frame, my clothes, experience disc brake issues - but everything else is clean.

Gates technical support says that the belt would not deteriorate so quickly and even if it did it would not release any residue, and that it can be removed and cleaned with no ill effects.

Any suggestions as to what I should check next? If this stuff came out of the bike then something needs some attention. If it didn't, how can it be confined to the belt and sprockets?

Update: It almost certainly is a leak from the Alfine 11 hub, Spot Bikes say it has been known to happen and there are a few search hits with people describing exactly this problem. The bike is in for service with a local shop now (under warranty), I'll update again with the outcome. Annoying to be without a bike...

Second Update: I'm picking up the bike tonight, after a cost-free fix under warranty. The hub was inspected by Shimano's representative and pronounced OK once the seal was replaced. The Gates drive components were decontaminated and everything is said to be fine now. If I experience any further leaks, shift issues or if exposure to Shimano's $$$$$ hub lubricant has had any negative effects on the drivetrain I'll continue the saga here.

Third Update: I've put a few hundred km on the bike after the fix and everything seems OK in terms of seal. I might be mistaken but it seems be slipping a bit more often when I put a lot of power on the pedals. I'm watching it and will start making some noise about a complete replacement from Shimano if it gets worse.

Fourth update (early April 2015): It's leaking again. Have asked the bike store to talk to Shimano about replacement :-( When it works it is a nice product but at this stage I would not recommend it to anyone - maybe if they give me a replacement and it works for 12 months with no leaking I might change my mind.

Fifth update (early June 2015): The hub is back from Shimano after being with them for approximately two months. The repair note, once it came back, says "replaced internals and seals". I don't know if that means my hub is now the equivalent of a current production Alfine 11 or if it has just had a new seal installed. Maybe it has just been patched up like it was the first time and it will start leaking again in 12 months of moderate use - or maybe it is now as good as current production Alfine 11 is claimed to be. In any case it has cost me a not-inexpensive wheel build + $20 more to ship it to Shimano, and I'm not that confident. Overall this has been a negative experience and I will be thinking carefully about whether I get another wheel built using this hub or just leave it on a shelf in the shed.

Sixth update (late July 2015): I built a new wheel with the hub. Left the wheel leaning against a wall for a couple of days until I had a chance to properly clean the Gates sprocket after the last leak. When I went to complete installation of the sprocket, shift lever etc. - I found it leaking again. Shimano can now replace this with a new one that doesn't leak. Or I give up, try something else, and do my best to help the rest of the world avoid the Alfine 11 hub.

Over a year later the leak started again and this time Shimano have had the wheel for almost a month and I'm starting to get frustrated. The decent thing to do would be to replace the hub and apologise for all the time wasted.

(Móż: edited in from comment because it seems useful, thanks OverTheRainbow)

On their "how we maintain your Shimano hub" page RideYourBike.com says:

It is our experience that Alfine 11 speed hubs seep oil out of the main seal. we now consider this normal! simply wipe off any excess and add more oil periodically.
Newer hubs seem to leak less than previous. If the seal is over-torqued it will deform and leak.

It was the seal on the Alfine Hub leaking. The local service agents for Spot were able to correct the leak by tightening the external seal on the hub and cleaning everything around it. No cost.

The hub is currently performing well. I'm as worried about it as I was when I made the decision to buy it, a new model of anything so complicated is likely to have these issues. But credit is due; it has stayed smooth and quiet after many rides through rain & grit where I would have been disassembling and cleaning a cassette & derailleur.

update: see main article. Hub is currently leaking not in use.

What you know right now is that there's quite a lot of it and it's quite greasy. Which is useful, but not especially useful.

One thing that occurs to me is to question whether someone else might have oiled the belt for you? Has it been in a shop, or do you have someone else in your house who maintains a bike? Is there a source of fumes where you store your bike that could be breaking down the belt? Or could someone have spilled chemicals on it?

There's really only a few possible sources of that grease on your bike, which I guess is why you're confused. The bike is new enough that the bottom bracket will be a sealed unit, so there should be no grease coming out of that. The hub should be sealed, but does contain grease. Plus external sources as above, which is why I'm focused on those.

I suggest cleaning it off and once everything is clean trying to see where the new dirt comes from. Right now it's spread from the source to cover everything, so there's no real way to tell. If you can put it in a workstand then clean off the hub, cogs, belt and everything, then reassemble it and test it you should be able to see whether anything is coming off the bike. I'd rotate the pedals enough to move about 15cm of belt, then run my finger/white cloth on the belt to see whether you can pick up new grease being laid down from one end.

If not, ride it a few metres and check again - visually inspect everything to see if there's new grease appearing. If not, ride it a few hundred metres and check again. Eventually you'll have ridden if every day for a week and if it's still clean the answer is "oil got on the belt from somewhere else". (it might stay a mystery, especially if someone did it deliberately then realised their mistake and doesn't want to own up to it).

I have a 3 year old Spot with an Alfine 11 with about 11,000 miles on it. The belt lasted about 9,000 miles. The hub started leaking at about the 7,000 mile point, and will currently dump all of its oil about every 400 miles, making for a really greasy belt.

As for slipping, as the hub gets older, it gets more sensitive to your cable length being out of adjustment.

It has to be somewhere you put your hands to lift the bike.

Check out the wheel rims. They can collect all sorts of grime when you ride in the wet. Some of it will be ground rubber from your brakes, but most is road dirt. Motor vehicles drop oil and grease, and lots of rubber on the road.

If you find that is the cause, the solution is to clean them after riding in wet weather.