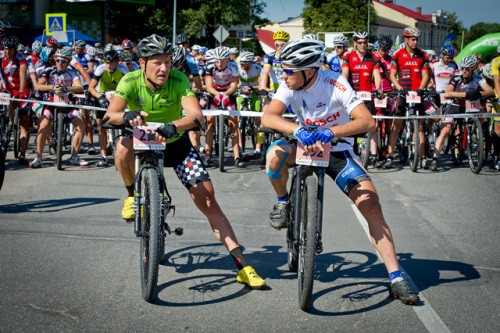 I heard on one of the podcasts I frequent that at least one carbon frame model was made so light that the manufacturer explicitly warned against sitting on the top tube. I don’t recall which model, nor even which podcast or which episode (for reference, it would have been Marginal Gains by Josh Poertner, or the Cyclingtips podcast, or the Nerd Alert podcast which is a separate podcast under Cyclingtips’ umbrella). I also believe it isn’t a general practice to warn against sitting on the TT. Consider that we aren’t putting our full weight on the tube, we are typically sitting on it while stopped with one leg on the ground. That said, Lennard Zinn of Velonews recently asked three manufacturers and two repairers about this issue. All three manufacturers said that this shouldn't be a problem. One repairer said not to do it, and the other repairer said it could be a problem, particularly if the top tube were ovalized.

Without discounting what the carbon repairers in that letter and in the OP said, be aware that they experience what statisticians would call survivorship bias. People come to a repair shop because their bikes are broken. The repairers don't observe all the CF bikes where the owner did sit on the top tube, but the bike didn’t explode.

Thus, if there's no warning sticker, I would think that sitting on your top tube is fine. Exercise more caution if the bike is light, or if you're heavy, or if the top tube is ovalized as described above.

This is a digression for interested parties. Related to the paragraph above, here’s the Wikipedia page discussing survivorship bias. In World War II, the US Air Force was examining bullet holes on returning B-17 bombers. They initially added more armor to the areas that got hit the most. However, Abraham Wald and colleagues told them to add armor to the parts where surviving planes did not have bullet holes: the engines and cockpit. In hindsight, it seems obvious that hits there would disable the bomber entirely and prevent it from returning home at all. This is one example of how survivorship bias can distort our conclusions.

According to a VeloNews advice column, opinions on this are very much mixed. Basically, the answer is that it depends on whether you have an ultra-lightweight bike.

Here are some quotes from the article (emphasis added):

5
Would a person standing on the top tube damage a carbon fibre road bike?

0
Extending integrated carbon seat tube
5
Would a person standing on the top tube damage a carbon fibre road bike?
1
What to do with scratched top tube on carbon fiber frame with no structural damage?
9
Is it necessary to reinforce a carbon fiber steer tube?
4
Void in carbon frame seat tube, is it dangerous?
3
Carbon steerer tube scratch (inside the tube) - how bad is it?
2
Damaged Carbon Steerer Tube, repair/replacement?
4
Matt black carbon bike